Methoxypyrazines and greenness in wines: myth or reality? A few perspectives

WineLand May 2013 Katja Suklje1 , Nico Gobler ,2,3; Zelmari Coetzee3 , Klemen Lisjak1 and Alain Deloire3,4 1 Agricultural Institute of Slovenia, Central Laboratories, Ljubljana, Slovenia 2 Eikendal Vineyards, Pty (Ltd.), Stellenbosch 3 Stellenbosch University, Department of Viticulture and Oenology 4 NWGIC-Charles Sturt University, NSW, Australia, 2650, adeloire@csu.edu.au Keywords: Methoxypyrazines, biosynthesis, photosynthetically active radiation
South Africa offers a wide variety of wine styles, with Sauvignon blanc wines ranging from tropical flavours to more green styles. This can be related to the diversity of the climate and soil in the Western Cape region. The greenness in Sauvignon blanc could be considered as a wine style up to the point where the green attributes dominate, resulting in a more one dimensional wine. In red wines, mainly Merlot and Cabernet Sauvignon, the perception of green attributes could be considered as an undesirable aroma (Bogart and Bisson, 2006). 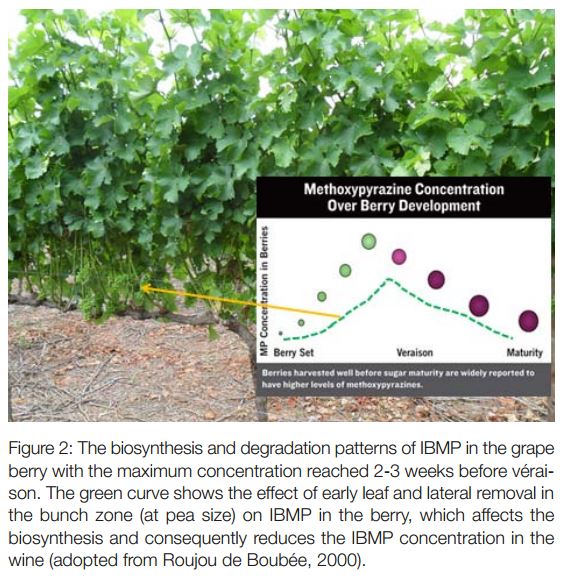 IBMP in the grape berry is located in the skins (95%), the seeds (4%) and in the pulp (1%) (Roujou de Boube, 2000). IBMP biosynthesis in the grape berry starts after flowering, reaching the maximum concentration two to three weeks before veraison, after which it declines during maturation, not only in concentration, but on a per berry basis as well (Roujou de Boube et al., 2000, Ryona et.al., 2008). In addition, recent studies have shown that IBMP found in the berry is synthesized by the berry itself and not transported to the berry from either the leaves or the shoots (Koch et al., 2010).

Abiotic factors such as light and temperature at the bunch level, vine water status and various viticultural practices can influence the concentration of IBMP in the berry and the wine (Sala et al., 2004; Belancic and Agosin, 2007). It has been shown that grapes and wines from cooler climatic regions contain higher concentrations of IBMP than grapes produced in warmer regions. Furthermore, recent studies have shown the importance of the timing and severity of leaf removal on the final concentrations of IBMP in mature grapes. Scheiner et al. (2010) have shown that early leaf removal, performed 10 days after flowering, intensely reduced IBMP concentration in Cabernet Franc grapes, while the same treatments applied 40 and 60 days after flowering had a less significant effect. Leaf removal performed after veraison had little or no effect on the IBMP concentration in the grape berries. Pre-v?raison bunch exposure is therefore crucial for reducing IBMP concentrations in grape berries at harvest, whereas light exposure after veraison does not influences IBMP degradation (Ryona et al., 2008, Scheiner et al., 2010; Suklje et al., 2012).

To understand the effect of bunch sunlight exposure on the IBMP concentration in grape berries during maturation and the resulting concentration in wines, leaf- and lateral shoot removal was performed on Sauvignon blanc and Merlot vineyards, in the Overberg and Stellenbosch regions (South Africa), respectively.

The experiment was performed in a commercial Vitis vinifera L. cv. Sauvignon blanc (clone 316 grafted on 101-14) vineyard located in the Overberg region of the Western coastal area, South Africa (34°S; 19°E). The row orientation is north-west to south-east with a 2.5 m x 1.8 m plant spacing. The training system is a double-cordon with vertical shoot positioning, pruned to six two-bud spurs per running meter of cordon during winter. To study the influence/role of light and temperature, a control canopy (shaded treatment) with 100% shaded bunches was compared to an exposed treatment with 100% exposed bunches on the morning side of the canopy. To accomplish this, complete leaf- and lateral shoot removal was performed at the phenological stage of berry pea size (19 December 2012). Leaves and lateral shoots were removed from the bunch zone on the morning side of the canopy to a height of 0.3-0.4 m above the cordon. As a control, no leaf- or lateral shoot removal was performed on the shaded treatment. The stem water potential (SWP) was used to determine the vine water status (Deloire and Heyms, 2011). The vines did not experience any water constraint during the growing and ripening season with a mean SWP of SWP -450 kPa.

The Merlot commercial vineyard is located in the Helderberg area, Stellenbosch (33°S; 18°E) and the vines (clone 348A grafted on US8-7) were planted in 2003. The row direction is East-West with a plant spacing of 2.4 m x 1.2 m. The trellis system is vertical shoot positioning, pruned to two buds spurs with 5 spurs per running metre cordon. Predawn leaf water potential (PLWP) and SWP were used to determine the vine water status and to manage irrigation, maintaining the vine water status at around -400 to -500 kPa for the PLWP values (Deloire and Heyns, 2011). To study the effect of light and temperature on the berry IBMP concentration, leaf and lateral shoot removal was performed on both sides of the canopy to the height of the first wire (100% exposed bunches) in the exposed treatment. No leaf or lateral shoot removal was performed in the shaded treatment (100% shaded bunches) as a control. The grapes were harvested according to the sugar loading model at the fresh and mature fruit stages (Deloire, 2011 and 2012). 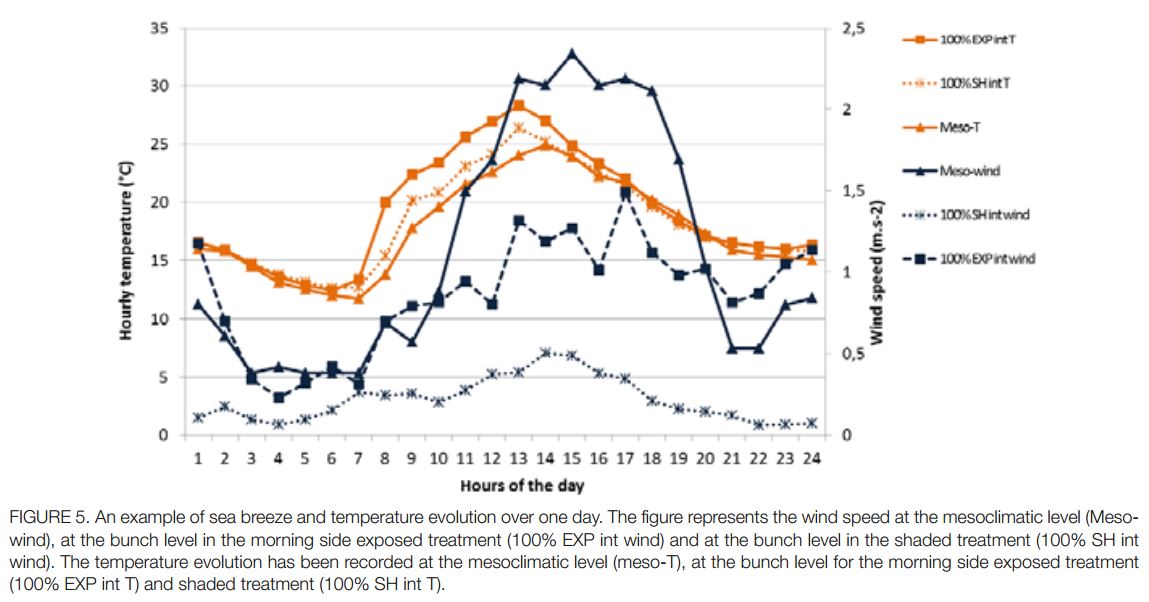 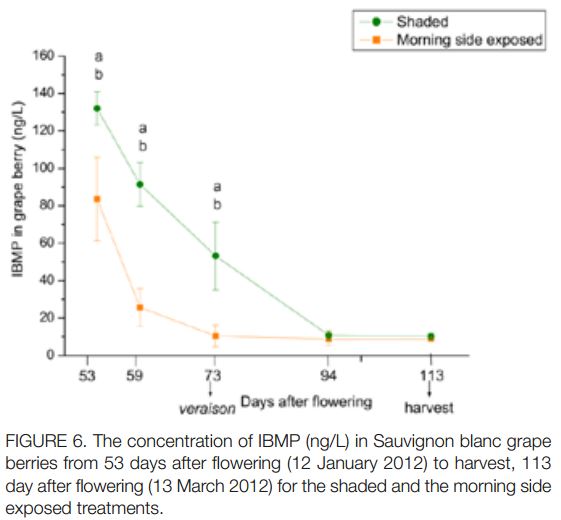 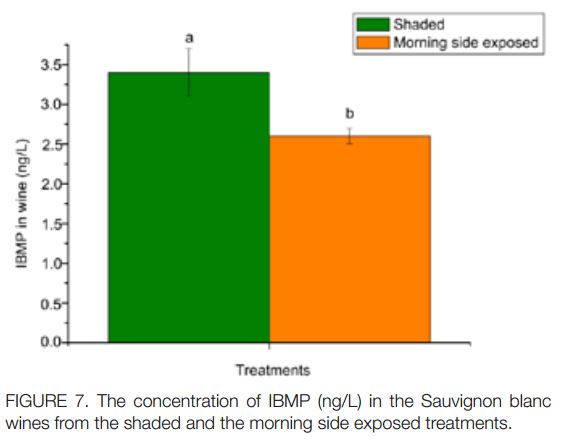 The choice of the site for Sauvignon blanc was done considering the positive effect of the sea breeze, coming from the Atlantic Ocean, on the bunch microclimate. This allowed for the opening of the canopy at the bunch level to partially separate the effect of light and temperature on the berry composition. Due to the location of this site, it was possible to open the canopy without getting any sunburn because of the occurrence of the sea breeze as can be seen in figure 5. An increase in the wind speed was observed from 10:00 onwards, reaching the maximum speed between 12:00 and 18:00. As shown in figure 5, the increase in the wind speed led to a decrease in the ambient and bunch temperatures, mainly from 13:00 onwards. Wind direction measurements confirmed that the wind did indeed predominantly come from the South (Walker Bay) and from the West (False Bay) during the mentioned hours.

Figure 8 shows the separation in wine sensory perception between the shaded and the morning side exposed treatments, with green attributes linked to no leaf removal (shaded treatment) and tropical fruity attributes linked to exposed bunches (morning side exposed treatment). Descriptors such as green pepper, grassy and overall greenness were grouped with IBMP. Tropical descriptors (grapefruit, passion fruit and guava) were mainly grouped with the varietal thiols such as 3-sulfanyhexan-1-ol (3SH) and 3-sulfanyhexyl acetate (3SHA) and some esters. By applying leaf- and lateral shoot removal, we were able to produce a more complex (fruitier) style of Sauvignon blanc in comparison to the one dimensional (greener) style of the wine produced from the shaded treatment.

The treatments did not affect the berry fresh mass and the classical ripening parameters irrespective of the harvest dates at fresh and mature fruit stages (Table 2). The increase in Brix between fresh fruit and mature fruit stages is mainly due to an increase in sugar per berry. The IBMP concentration in Merlot grape berries decreased during maturation as expected. Higher concentration of IBMP in grape berries were observed in the shaded treatment, where no leaf and lateral shoot removal was performed, compared to the both sides exposed treatment (Figure 9). At the final three sampling dates, although no significant decrease in the IBMP concentration was observed, a lower IBMP concentration was noted for the both sides exposed treatment in comparison to the shaded treatment.

To reduce the pyrazine level in the berry and consequently in the wine, canopy manipulation can be applied in the bunch zone by removing all the leaves and lateral shoots at a height of 30 to 40 cm above the cordon. Removing all leaves and lateral shoots in the bunch zone on one side of the canopy is an effective tool to reduce the IBMP concentrations in the wines. The choice of the canopy side to remove leaves has to be reasoned properly according to the row orientation and site location.

By removing only the laterals in the bunch zone, and keeping the basal adult leaves of the primary shoot intact, sufficient light will be allowed into the canopy at the bunch level. This selective opening of the bunch zone would, however, be more expensive than just removing both laterals and basal leaves simultaneously.

In a warm/hot climate, similar results can be obtained by indirectly increasing the light in the bunch zone using modified VSP trellis systems such as the Smart Dyson, the sprawling VSP (allowing light to penetrate the canopy and to reach the bunches through the top of the canopy: diffuse light penetration) or implementing a new training system such as the Lys (Castro et al., 1995).

In some Merlot and Cabernet Sauvignon wines, aromatic attributes related to Eucalyptus and mint are found which are in some instances described as green. These attributes are not linked to IBMP, although further research is needed on this topic.