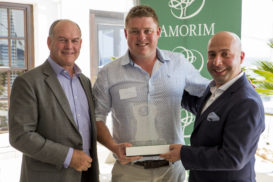 Simonsig Estate, the pioneering Stellenbosch winery responsible for making the first Méthode Cap Classique wine, became the most-awarded cellar in the history of the Amorim Cap Classique Challenge by winning the competition’s Best Producer Award for the fourth time. This year’s award went to Simonsig’s Cuvée Royale Blanc de Blancs 2012, a 100% Chardonnay wine with lees contact of 60 months, won the award for the best wine of the competition as well as topping the Blanc de Blancs category.

Simonsig also won the category for Rosé Cap Classique with its Pinot Noir Rosé 2015, a wine exclusively made for the Woolworths retail chain.

2017 saw this prestigious competition taking place for the 16th consecutive year. The annual Cap Classique Challenge is hosted by the MCC Association in association with Portugal-based cork company Amorim, the world’s leading supplier of cork wine stoppers and other cork products, whose closures are found on the world’s most prestigious wine brands. Some 97 entries were received this year.

The category for Brut Cap Classique, which received the most entries, was won by Overberg producer Domaine Des Dieux for Domaine Des Dieux Claudia Brut MCC 2011. In the Museum Class for wines eight years or older, Graham Beck took the top honours for its Brut Zero 2005.

Speaking at the awards ceremony, judging panel convenor Heidi Duminy, CWM, said the overall standard was agreed by all judges to be excellent, with vintage distinction playing a key role.

“The panel was particularly impressed by 2011 wines that are presenting gorgeous refinement with 2015 also standing out for its character. Across the styles, time on lees was the common thread that set the ordinary apart from the outstanding. The top scoring wines displayed purity of fruit and deft use of varieties, outstanding balance, complexity, freshness and harmony.

The Brut Category accounted for 45 of the wines entered and was the best performing class overall, although, said Duminy, there were some really exquisite outliers in the Blanc de Blancs line-up.

“There is tangible evidence of a better understanding of the intricacies of fruit quality, more strategic intent in blending of cuvées, the role of varieties, careful use of oak and restraint of dosage.

“Thanks to the dedication and passion of the producers, the Cap Classique Association as well as consumer demand and healthy burgeoning competition, Cap Classique offers the best value proposition to wine lovers and is brilliantly poised to continue to rise in all aspects.”

Duminy’s fellow judges were Higgo Jacobs, sommelier and consultant, educator and journalist Cathy Marston and winemakers Elunda Basson and Johan Malan from JC le Roux/Pongrácz and Simonsig respectively. Judging was done to the 100pt system, and the scores of producer-judges were not taken into account for their own wines.

The annual Frans Malan Trophy, awarded to an individual for his or her exceptional contribution to the category of Cap Classique wines, went to Pieter Ferreira of Graham Beck.

“These producers are responsible for a product that in 2016 sold 4,4 m bottles in South Africa, a staggering growth of 24.5% compared to 2015 or nearly one million bottles,” he said. Compare that to 16 years ago – the first time this competition was held – when local sales of Cap Classique just edged the 700 000 bottles per year mark. When it comes to exports, the growth also continues with the UK, US and African countries leading the appetite for South African bubbly.

“And the growth doesn’t stop here as 2017 promises to excel again. As a note, our local Cap Classique cork sales January to August are 27% up compared to 2016, so another rosy year is expected,” said Sá. “While there can be no doubt of the superb quality, Cap Classique has a new challenge today and must continue improving the presence of strong brands. This is due to the stratospheric inroads made by Champagne, Prosecco and Cava in South Africa, where imports surpassed the R320 million rand mark in 2016, nearly as much as South African sparkling wine exports, according to the ITC organization Trade Map.”

Sá said the future challenge for Cap Classique will be no different from the challenges facing the South African wine industry as a whole: creating strong brands and deploying more aggressive marketing initiatives to ensure Cap Classique continues to grow in the market-place.