2017 Diners Club Winemaker and Young Winemaker of the Year 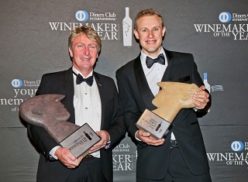 The winners of the 2017 Diners Club Winemaker and Young Winemaker of the Year Awards were announced at a black-tie gala dinner at La Residence Hotel in Franschhoek on Saturday 25 November, with Christiaan Groenewald (Eagle’s Cliff Wines) and Wade Roger-Lund (Jordan Estate) claiming top honours respectively.

This year’s Diners Club Winemaker of the Year (Pinotage category), Christiaan Groenewald, delighted the judges with his Eagle’s Cliff Pinotage 2017. This is the second time he has been honoured with this distinguished accolade, having won Winemaker of the Year in 2013 for his Arendskloof Voetspore Tannat Syrah 2011 (Non-Bordeaux Red Blends category). Christiaan is one of only five winemakers to have won this award twice.

The Winemaker of the Year is in its 37th year, while the Young Winemaker has been running for 17 years. These are by far the most prestigious awards on the South African wine calendar. The competition affords all winemakers a shot at the sought-after title since entries are accepted from a wide spectrum of producers and remain free of charge.

The winning Winemaker receives R50 000 while the Young Winemaker, R25 000.  Both winemakers get two return business class tickets on Delta Airlines to any wine producing region in the USA.

Christiaan grew up on the family farm in the Breede River Valley where his father grew wine grapes, so he was exposed to the wine business from a young age. He obtained a degree in Agriculture and an MBA in Business Administration at Stellenbosch University, worked as an agricultural economist, a financial planner and managed a wine export company before returning to the farm on the death of his father. He built a cellar in 2005, where he makes the Eagle’s Cliff range of wines, wines that offer beautiful fruit and great drinkability at a reasonable price, as well as the more serious Arendskloof wines.

Wade Roger-Lund was born in Worcester but grew up in Johannesburg. His passion for wine came through his uncle, John Loubser, cellarmaster at Steenberg and MCC maker of Silverthorn. Wade studied winemaking at Elsenburg where he excelled. After travelling to France and working harvests in many parts of the Cape, he joined the Jordan winemaking team in December of 2014 and has been a huge asset. He was given a top Chardonnay vineyard to make the first Cap Classique under the Jordan label, which was released in 2017 to great acclaim, winning Wade the 2017 Young Winemaker of the Year Award.

The 2017 Diners Club Winemaker of the Year judges