The annual Fleur du Cap Theatre Awards, which have been honouring theatre excellence, originality and the vibrancy of our many cultures since 1965, will be one of the biggest highlights on the Cape’s entertainment calendar in October.

The awards which are in their 56th year, will this year, focus exclusively on the Most Promising Student category. They will also be held virtually as a result of the constraints imposed by Covid-19 and the associated restrictions.

“The performing arts industry has been hit hard by Covid. There’s no denying this sad reality. Some venues such as The Fugard Theatre and former Alexander Bar Theatre in Cape Town have closed down permanently,” explains judging panel chair Africa Melane.

“The obvious route would have been to dim the lights on the awards. That, however, would have been to negate the rich reservoir of creative talent that remains right here in the Western Cape. Covid-19 may have forced venues to close, but the virus has never stopped the burgeoning of ideas, abilities, energy and drive.”

Reflecting on the nine institutions whose graduate students were reviewed by the panel under the Most Promising Student category, Melane was full of praise for the more than 100 students whose work was reviewed: “When the students enrolled for their first year, we did not anticipate that there would be a pandemic that would be so disruptive to all our lives. And still, the students put in the hard work and produced outstanding results which deserves recognition.” 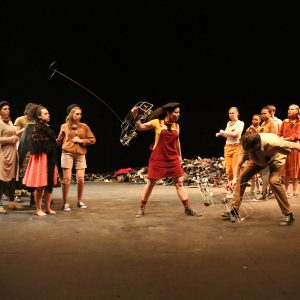 Theatre critic and arts journalist Tracey Saunders, who is convenor of the Fleur du Cap Theatre Awards’ student panel, adds: “Describing the past 18 months as unprecedented and challenging seem somewhat redundant and, yes, those are the circumstances that faced the cohort of 2020 students. While for the majority of those involved in the creative sector, life came to an abrupt halt in March 2020 for students in tertiary institutions, the academic calendar marched on.

“In the face of lockdowns of varying severity, students and lecturers infected and affected by Covid and a litany of loss, learning continued using a hybrid of in-person and virtual teaching. Lecturers were called upon to hold space and hearts in ways never envisioned and Covid protocols became an accepted part of first night rituals. In the true spirit of thespian tradition, the show went on and students performed work where the panel were able to enjoy, even briefly, the magic of live performance.

“The student panel follows students throughout their academic careers and although there were limited performances in 2020 and 2021, the resilience and fortitude shown by the graduates were limitless. New kid on the block LAMTA (Luitingh Alexander Musical Theatre Academy), staged a showcase for graduates and a production featuring all students. Both the CTDPS (Centre for Theatre, Dance & Performance Studies) and AFDA productions were presented on stage and online. No matter the medium, the magic was still there.”

Speaking on behalf of sponsor Distell, André Opperman, the company’s Human Resources, and Corporate Affairs Director said: “Over many years, we have come to realise the contribution of the arts to the success of our business, in particular, the role arts play, as a catalyst for social transformation. The arts have always given us an opportunity to connect with one another and to transcend the boundaries and obstacles of our everyday lives where we so often become consumed by differences of history, culture, and language, among many others.”

Opperman added: “The creative talent that we have seen is testimony of what is possible when we nurture the most original minds, that’s why as Distell, we remain committed to supporting and helping the arts to flourish.”

Another exciting addition to this year’s event is a video production that looks reflects on the history of the awards and their impact over nearly six decades. The video features some of South Africa’s biggest names in acting, directing and stagecraft. To watch go to: https://youtu.be/Gbe0ly1Xkn8

Concludes Melane: “The video is also a wonderful tribute to some of the biggest names in 20th century local theatre, from Sandra Kotze and Bill Flynn to Pieter-Dirk Uys. The work of writers such as Adam Small and Athol Fugard are featured, along with highly influential directors Robert Mohr and Mavis Taylor. Then it fast-forwards to the 21st century, to the digital impact on theatre, its new voices, new energy and new ideas. What an exceptional insight it offers viewers!”

Short-listed candidates, in alphabetical order are:

The Most Promising Student award winner will be announced in late October, as will those who will be recipients of the Lifetime Achievement, the Innovation in Theatre, and the Encore awards.