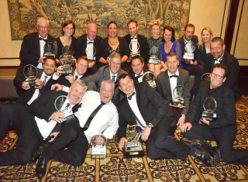 In one of the most competitive line-ups in the 21 year history of the Michelangelo International Wine and Spirts Awards, a Cabernet Franc from Nelson Estate in Paarl took the Grand Prix Trophy, the show’s top accolade. The Lisha Nelson Cabernet Franc 2014 achieved a stunning 99pt score in the 100pt scoring system used by the predominantly foreign judging panel. This year’s Michelangelo Awards saw 28 judges from 23 countries judging 1 633 entries for South Africa’s leading international wine show. The 2017 Michelangelo Awards ceremony took place in Cape Town on 29 September.

Lorraine Immelman, founder and CEO of the Michelangelo Awards says that the judges were unanimous in their view that South Africa was making the finest wines in its history, complemented by a diverse and exciting component of top quality spirits.

“This year’s judges included British Masters of Wine, sommeliers, educators, spirits experts and influential journalists from Europe, the Far East and the Americas, some of whom have judged on numerous Michelangelo Awards panels in the past,” says Immelman. “The quality of wines are at a noticeable all-time high, with the brandies and other spirits termed world-class in terms of distillation technique and diversity of flavour.”

Out of the 1633 entries for this year’s competition, the judges handed out 21 trophies, 20 Platinum medals, 118 Double Gold medals, 275 Gold medals and 197 Silver medals. “The high number of gold medals certainly reflects the judges’ comments and the scores which were returned this year. For a Michelangelo entry to be awarded a gold medal, it needs at least 89 points, and keeping in mind that we award only the approximate one third of entries, it explains where the majority of the points lay this year.”

The wine category with the most entries was the one for Red Blends, which included Bordeaux as well as Cape Blends, namely 225. Here three Platinum medals were awarded with 25 Double Gold medals and 18 Golds.

In the Cabernet Sauvignon section, 115 entries were received and awarded with two Platinum, eight Double Gold and 24 Gold medals.

The Shiraz category also put in a strong showing with 156 entries in which the judges awarded ten Double Gold, two Platinum and 31 Gold medals.

The highest entries received for White wines was for Sauvignon Blanc, which received 176 entries. In this class only two Double Gold medals were awarded, and ten Gold medals.

Some 123 Chenin Blancs were entered and awarded one Platinum medal, 11 Double Gold medals and 29 Gold medals.

True to South Africa’s reputation, natural sweet and fortified wines showed strongly. A total of six Platinum medals and 14 Double Gold medals and were awarded out of 75 entries.

In the Brandy category, Oude Molen was the top producer. Besides winning the Brandy Trophy with the Oude Molen VS Cape Brandy Solera Grand Reserve, the producer won Double Gold medals for its 100 Reserve Brandy and Ladismith Brandy, as well as one gold.

During the Michelangelo Awards Ceremony, Immelman emphasised the importance of finding added ways of benefitting wine and spirits producers entering the event. For her, it is about adding value through Michelangelo.

“Our competition has always been committed to ensuring that producers entering the competition and the people who follow the lauded wines and spirits, find value in the Michelangelo brand,” says Immelman. This year, for example, the competition has embraced the world’s increasing dependence on technology to bring a world first to wine competitions.

“Using various experts in the field of digital marketing, Michelangelo has embarked on a ground-breaking project that – as far we know – is a world first,” she says. “From this year the coveted Michelangelo awards stickers – from silver and gold to double gold and platinum, all the way up to trophy award stickers – will carry a QR code. Once scanned on the smartphone of the retail, restaurant or hotel customer, the code will allow access to succinct and varied information on the product, including tasting notes and a guide as to where the specific product can be purchased and/or ordered. Data on the major Michelangelo sponsors – Airlink, Tsogo Sun and Multi-Color Corporation – will also be accessible.

“Wine is made in the vineyard and spirits crafted in the pot-still,” says Immelman. “But it is up to events such as Michelangelo to embrace innovation and technology to ensure consumers and the various producers who enter the competition benefit from the exposure and marketing initiatives which we have embarked on.”

The quality and standard of a competition such as the Michelangelo International Wine and Spirits Awards is often reflected by the standard of sponsors and associates joining forces to bolster the event. And this year two of the leading brands in the South African hospitality industry –  Tsogo Sun and Airlink – have partnered with Michelangelo to ensure the wines and spirits entered, as well as the ethos of Michelangelo, are  promoted to travellers, tourists and the wine and spirits loving public in general.

“Together with Airlink and Tsogo Sun, Michelangelo will be in a position to literally spread its wings and open doors throughout South and southern Arica,” says Immelman.

“This sponsorship will see wines entered into Michelangelo automatically selected for on-board service on Airlink. Tsogo Sun is one of the South African hospitality industry’s largest wine purchasers, exposing hundreds of thousands of people to its wine offering through 14 entertainment destinations and over 100 hotels. As a Michelangelo sponsor, Tsogo Sun will use its extensive marketing channels to promote the competition as well as the participating producers.”

For more information and the full list of results, see www.michelangeloawards.com.