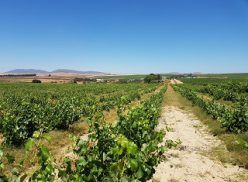 PHOTO 1. In this block of Grenache noir it is obvious that growth and production are much weaker in the sections which are affected by couch grass.

At this stage most grapes have been harvested and we can start talking about the very important post-harvest period. This period is important, because the foundation for the next harvest is largely being laid now.

When sufficient soil water is available, grapevine roots start growing at the time of the harvest and especially thereafter. This is the second growth phase (the first is after bud burst) and the most important time for nutrient uptake by the grapevine. To give an indication of its importance, it has been calculated that during the post-harvest period, the grapevine’s uptake represents 38% of its nitrogen requirements, 23% of P and 16% of potassium. It is therefore the most important fertiliser application of the season. An effective fertilisation programme can only be drawn up based on accurate soil analyses and should be done every three years.

A common error is to apply fertiliser too late. Active leaves are required to produce carbohydrate reserves from the nutrients that have been taken up. It is also important to bear in mind that from bud burst to flowering a grapevine is largely dependent on the reserves that are stored in the permanent structure of the vine. Ideally fertiliser should be applied approximately two to three weeks after the harvest. On soils with a low water retention capacity, such as stony and sandy soil, it may be applied in instalments.

Nitrogen fertiliser should be adjusted according to vigour. It may range from 15 to 40 kg nitrogen (N) per ha for the post-harvest application. Maximum fruit yield is obtained at a lower N-nutrition level than that by which maximum vegetative growth is obtained. Overly vigorous grapevines should preferably not receive any nitrogen. Weak growth may be due to fertiliser deficiencies, but may also occur due to soil compaction, nematodes or drought. The wine objective should also be borne in mind; high quality and/or noble cultivars require moderate growth to produce top quality, while mass bearers require more vigour.

To ensure optimal nutrient uptake and production and retention of reserves, there should be sufficient soil water, thus necessitating post-harvest irrigation. It is necessary to continue monitoring soil moisture and the grapevines should not experience any stress. Good post-harvest irrigation is especially beneficial for an optimal root growth cycle. If post-harvest irrigation is not possible, or there is no rain to wash fertilisers into the soil, it is important to fertilise cover crops for optimal growth and material production. By so doing there is an accumulation of organic matter which will release nitrogen when water becomes available again.

Weeds should be controlled, on the berms especially, to prevent the loss of irrigation and fertilisation. Spot spraying of perennial weeds may also be undertaken and couch grass should be controlled very carefully. Couch grass competes aggressively with grapevines for water and nutrients, and also secretes chemical substances that hamper the growth of the grapevines.

According to P. le Roux (Villa Crop Protection) the best months to control couch grass are February/March using herbicides and then again in October only with glyphosates (must be applied with extreme care). Where a thick mat of couch grass occurs, a selective herbicide may be used together with ammonium sulphate and a “super wetter” which improves the distribution and penetration of the herbicides. The biggest secret with regard to effective control using herbicides is actively growing, deep green couch grass. When it is brown or yellow the results will not be good. A cultivator action may even be considered to disturb the couch grass and thereby to stimulate growth.

Leaves should be retained for as long as possible for good accumulation of reserves, and in the case of fungal infections, such as oidium on the leaves, fungal control should be considered. In areas that experience high fungal pressure it is very good practice to spray a fungal control product directly after the harvest. 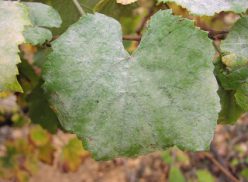 PHOTO 2. Fungal infections, such as oidium, may cause premature leaf fall.

It is also a good idea to commence seed bed preparation for the sowing of cover crops after the first showers. It is very important to obtain clean seed and great care must be taken to avoid seed that contains rye grass at all costs. In the short term cover crops are an expense, but it has been proven that it is a profitable practice in the long term. 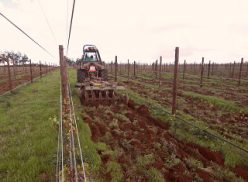 In vineyards where the soil has compacted or recompacted, water infiltration and cover crop performance may be improved by tilling the soil in alternative rows using a wiggle plough in the middle of the row.