A day in the life of a wine agent 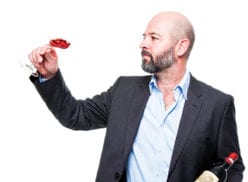 How does a maverick winemaker with a modest portfolio succeed in having his wines listed on some of the country’s most prestigious wine lists?

Mphumeleli Ndlangisa was a successful investment banker before he decided to pursue his passion for agriculture and winemaking. He founded Magna Carta Wines in 2012, assuming the role of both winemaker and distribution agent. As his business grew, he enlisted the services of newly established wine agency Toasted Barrels. Thanks to Toasted Barrels, Mphumeleli has seen Magna Carta Wines listed at establishments such as Farro and Dry Dock in Johannesburg.

Toasted Barrels was founded a year ago by Michael Khoza and Clive Hlabathi to showcase a diversity of unique, boutique-style South African wines so as to give small producers a seat at the table with established producers.

“This involved a lot of drinking – not that we minded,” Clive quips. “We hope to take our wines and knowledge to the untapped markets that are predominantly black and locked out of this experience without neglecting the more mature market. We want to create and maintain a healthy wine-drinking market.”

Clive’s ambitious career in wine began when he was working as an in-store promoter while studying towards his BCom degree. His mentor, Charmaine Cockhead, offered him a job in 2011. She was expanding her wine distribution business in Gauteng under the WineDynamics umbrella and his job involved looking after 11 boutique wineries in the Cape Winelands. “I was the company’s first employee,” he recalls.

Like Toasted Barrels, wine merchant MorVino also distributes wine and spirits to a portfolio of restaurants and the trade. “Siris Vintners is currently celebrating 18 years of trading in the Western Cape,” says Bubbles Hyland, a partner at MorVino which is a sister portfolio to Siris Vintners. Bubbles’ dad, has always had a keen interest in wine and she grew up sipping Châteaux de Sours Rosé.

Moving to South Africa and being surrounded by the beautiful Cape Winelands helped to develop her passion for wine. While heading up marketing and events at the Grand Daddy Hotel in Long Street, Bubbles decided to shake things up and aim for a wine list with unique wines from boutique producers. It was during this time that she met her current business partners at Siris Vintners who ended up offering her a job.

“When I joined Siris Vinters it had an established portfolio of 18 wine farms,” she says. “After three years I was made partner at sister portfolio MorVino. Siris Vintners was established in 2009 with the aim to house smaller boutique farms. It now represents 18 producers, being one craft gin producer and 17 wine producers. We pride ourselves in having long-standing relationships with our producers.

“We only distribute to the trade in the Western Cape and farms generally only move away from us when the need arises for national distribution. We aim to keep our portfolios balanced so if farms approach us we see what would be the best fit. We don’t want producers to compete against each other on the portfolio. We like to have a balance across the regions, varietals, price points and production size. We also need the farm to be active in marketing and have a presence in the local market. We can list an unknown wine because it tastes amazing and the label is attractive but it won’t move if end customers have never heard of it.”

Clive agrees the South African market has shown an appetite for niche varietals such as Grenache and Semillon, particularly lead by smaller producers. “Consumption of artisanal wines is growing rapidly,” he says. “A difficult aspect of the job is convincing the final point of sale to lead the movement of shifting drinking patterns by simply offering more diversity. In addition, operating in Johannesburg with its plethora of wines to choose from is a task and a half. There’s so much good wine on the market and it’s hard to choose which ones make it on a menu, so many distributors stick to tried-and-tested brands.”

Clive previously worked for Great Domaines and holds a WSET Level 2 certificate. “The lessons learned and wines experienced at Great Domaines will remain with me well into the future,” he says. “I tasted some of the best European wines in the world.”

Clive says personal interaction with customers while providing expert advice is at the core of a successful wine agent’s business model. “At Toasted Barrels the most satisfying thing is when people come back and thank us for introducing them to the unknown.”

James Pietersen, who manages the South African wine portfolio at Wine Cellar, completed Michael Fridjhon’s wine-tasting course with distinction in 2007 and has also completed several Cape Wine Academy courses. As a professional wine taster who’s tasted for publications such as Platter’s South African Wine Guide and Wine magazine, he has a vast knowledge of and intrinsic passion for wine – both key attributes for a wine distribution agent.

James, along with his partner at Wine Cellar, Roland Peens, provides advice to private customers. Wine Cellar is also the largest private wine storage facility in Africa and manages 25 000 cases at any given time.

James’ passion for wine began while helping his law professor pack his cellar. In exchange for his efforts, his professor opened a 1982 Lynch-Bages which triggered his enviable career.

“I taste about 5 000 wines a year and use this vast library to select wines that fit the right price points and flavour profiles, and tell the best stories that I can relay to our particular customers,” he says. At the moment, he’s particularly taken with South African Chenin Blancs and Chenin Blanc-based blends.

For James, a typical day starts at about 06:00 with a quick email check. “I’m in the office by 08:00, mostly processing emails, procuring stock and selling wine via emails or newsletters. And of course most days require tasting new wines.”