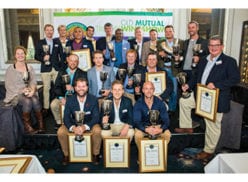 Judging by the results of this year’s Old Mutual Trophy Wine Show, there’s a noticeable thread of quality, passion and natural talent that runs through the industry, whether we’re talking established producers or new kids on the block.

The results of the 2018 Old Mutual Trophy Wine Show (#OMTWS) were announced at a luncheon at the Mount Nelson Hotel in Cape Town on 29 May. Of the 977 wines judged, 40 gold medals and 23 trophies were awarded for best in class, including the coveted most successful producer of the show.

“I feel exhilarated,” Nic says. “It’s been a long road and we put in a lot of hard work. It’s just good to see it has finally paid off.” He puts his success down to being focused in his work. “For me it’s about focus in the vineyard and focus in the cellar. But having a strong brand also helps. I think it’s easier when you have a clear idea of which direction you want to take with your wine.”

Chairperson and convener of the #OMTWS and leading wine authority in South Africa, Michael Fridjhon says he’s proud of the quality of judging at this year’s event. “Even though the panel changes every year, there’s a certain carry weight, which means judges are pulling their weight together, rather than pulling it apart. For me, that’s a very encouraging sign.”

This year’s results exceeded expectations as 90% of the trophy winners were gold medallists from the past five years.

Equally exciting is the presence of several newcomers who stole the limelight. De Grendel, Laborie, Springfontein and Middelvlei are all first-time trophy winners, while Arabella, Beaumont, Glenelly, Grande Provence, Middelvlei, Overhex, Rainbow’s End and Zandvliet are among the first-time gold medallists.

Although this is Middelvlei’s first time on the podium, the Mombergs have been traditional wine producers since 1919 and their wine is still fermented in old concrete tubs in the estate’s century old cellar.

“We don’t use any fancy techniques and try to keep it as natural as possible,” Tienie says. “I think it’s about getting the basics right. For me, winemaking is all about timing. I always say that if you can cook an egg to perfection you’ll probably be a good winemaker.”

The 2018 winner of the Nestlé Pure Life Trophy for the show’s best Sauvignon Blanc was Stark-Condé for its 2017 Round Mountain (wooded) Sauvignon Blanc.

The 2015 Buitenverwachting ‘1769’ won the dessert wine trophy which the 2014 vintage bagged last year. Two vintages in a row of the Landzicht Muscadel won the best fortified wine trophies and two successive vintages of DeMorgenzon Chardonnay, the 2016 in 2017 and the 2017 in 2018, won gold medals.

Stellar Organics No Sulphur Added Organic Shiraz won gold medals in 2018 and 2016 for the 2017 and 2015 vintages respectively.

“The other key takeaway from this year’s event was the depth of talent in the strong classes,” Michael says. “Look at how many Shiraz, Chenin Blanc and Chardonnay gold medals there were, and look at how good those wines are. Our strong classes are indisputably world-class. The wines on the tasting benches were absolutely fabulous this year.”

With new stars sharing the podium with familiar players at this year’s show, it’s fair to say the judges have produced a credible, coherent set of results the wine-drinking public can confidently rely on.