A Practised Hand – KWV is still thriving after 100 years 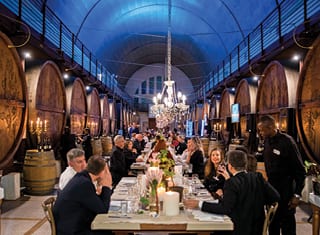 As KWV celebrates its centenary this year it’s proving that 100 years of being in business has equipped it with a remarkable ability to adapt and thrive.

KWV has undergone many changes over the past 100 years and that’s not about to change. CEO Boyce Lloyd has vowed that as the company enters its next 100 years, it will focus on engaging consumers through exciting brands and bold innovations, never compromising on quality. He calls this “fresh consistency” which will drive strong and relevant brands, offering consumers consistent and exceptional experiences. Four areas of innovation offer a tantalising glimpse into how KWV’s vision will become reality:

KWV has converted the Cathedral Cellar into a stylish events venue which is set to become one of the most sought-after venues in the Cape Winelands. Brand manager Tanya Blokdyk says this is only part of a larger strategy to position KWV for the next 100 years. “The Cathedral Cellar reflects not only KWV’s history, but also that of the South African wine industry,” she says. “As a 100-year-old company, a brand, KWV can proudly reflect on the past and nowhere is this legacy better expressed than in the Cathedral Cellar. With its soaring barrel-vaulted ceiling, stained-glass windows, imposing rows of hand-carved wine vats – some of the largest in the world – and granite and wood-inlaid floor, the Cathedral Cellar has long been regarded as the heart of KWV. Under the custodianship of KWV ambassador chef Mynhardt Joubert, the new venue offers a one-of-a-kind experience amplified by the magnificent surroundings.”

KWV will soon unveil another gem: the Cathedral Cellar wine range, consisting of five wines, will be released to the South African wine market for the first time in February next year. “This will be a flagship wine brand,” Tanya says. “As we enter the next century, KWV’s goal is to foster global awareness with this premium brand. British Master of Wine Tim Atkin recently said there aren’t enough South African premium wine brands made in the kind of quantities which make it possible for consumers globally to enjoy it – which will allow the local winelands to enjoy greater awareness and build an image the country deserves. We hope Cathedral Cellar will change that.”

KWV has revamped this trusted brand’s label to better reflect its celebrated French heritage. The new label now incorporates the French fleur de lis and pearl symbolic of Paarl. It has a luxury focus, elevating its aesthetic appeal to match the brand’s intrinsic quality. In line with the worldwide trend, Laborie will release a premium, Provençal-style rosé this summer. “The rosé is inspired by the Provence Rosé style,” Laborie winemaker Kobus van der Merwe says. “Our focus was to produce a pale rosé that showcases overall berry fruit intensity and a concentrated, focused palate with a mineral finish. This was achieved with the cultivar selection of Shiraz, Mourvèdre, Cinsaut and Cabernet Sauvignon.”

Besides an exciting packaging upgrade across its brandy range during the second half of this year, KWV has also concluded a highly successful campaign. The Brandy Reimagined campaign involved creative chefs, sommeliers and mixologists and was part of a determined focus on a younger, vibrant market for KWV Brandy. “KWV will also make a once-off very special 100 bottles, titled KWV Centenary,” spirits marketing executive Nuno Fernandes says. “This special blend has been put together by our internationally acclaimed distilling team headed by master distiller Pieter de Bod, who has a number of World’s Best Brandy titles under his belt. As a judge at a number of international competitions, he has described it as the best he’s ever tasted. The oldest brandy in the blend is from KWV’s very first brandy, bottled in 1926. Many may not know this, but KWV’s historic cellars in Stellenbosch burnt down in 1942 and only a single barrel survived. Some of this precious liquid has gone into the Centenary blend. The balance is made up of our best 40 year and older brandies.”

After 100 years, KWV shows no sign of slowing down or becoming complacent. Quite the opposite.

Chief viticulturist Marco Ventrella offers a long-term glimpse into the future. “This exciting area of development has been underway for some time now. We’re already working with Grenache Blanc, Petit Verdot, Tannat, Tempranillo, Petite Sirah and several other varieties – either in blends or as stand-alone varietal wines. Several Italian cultivars are on the horizon, with Sangiovese, Nebbiolo and Vermentino already planted, and a handful of other Italian Mediterranean varieties that will be new to South Africa. We’re also experimenting with an interesting new muscat white grape variety that will see its first commercial block next year. Trials remain ongoing as we search for purity of fruit, and great quality and variety in wine styles, flavours and textures.”