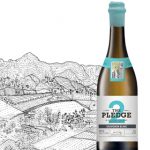 Those who’ve had dealings with Bernard Fontannaz would agree: once he’s put his mind to something he gets it done. The Pledge is a case in point.

Since its inception the wine retail environment has been Origin Wine’s focus, with service and innovation being key to its success. And while Origin Wine founder and CEO Bernard Fontannaz and co are synonymous with funky packaging and outrageous parties, they don’t dominate the world of fine wine. Yet.

Investment in Stellenbosch through the acquisition of Devon View – which Bernard refers to as their Grand Domaine – and the subsequent introduction of Grand Vin de Stellenbosch, a Bordeaux style blend, are testimony of a shift towards also serving the premium wine market. The Pledge is the next step towards the top end of the market and the first wine in this series will be a Sauvignon Blanc, comprising a blend of small batches of quality grapes from various regions.

Few would argue that South African white wines generally outperform their red counterparts.
Sauvignon Blanc in particular has the edge, Bernard says. “We’ve noticed a growing global interest in Sauvignon Blanc which can no longer only be viewed as simply a reaction to the well-known ‘anything but Chardonnay’ or ABC notion. It’s rather a discovery and an on-going growing liking for its pungent character and fresh, zesty, crisp palate,” he says.

Regional diversity is a South African strength when it comes to Sauvignon Blanc, with the best parcels from various regions likely to present meaningful diversity and intriguing building blocks. South Africa has a “vital, pivotal” role to play with regard to the stylistic approach to Sauvignon Blanc as it’s able to produce a style that showcases aspects of both New Zealand’s pungent style and the more subdued, classic, mineral style of Sancerre.

Bring on the bling
The increased focus on quality was reflected in the impressive results at the International Wine & Spirit Competition. Several of Origin’s UK supermarket brands performed well, with the Morrisons Signature Shiraz winning gold. A Silver Outstanding award for the Tesco Finest Sauvignon Blanc suggests a knack for the varietal. To complete the awards haul, Grand Vin de Stellenbosch and two wines from the Stormhoek range each won silver.

The Pledge will initially launch with a South African Sauvignon Blanc and as Origin Wine expands its global wine production footprint it will expand the range to include the best parcels of other varietals from various region. The next offering is most likely to be a Malbec, produced by Origin’s Argentinean sister company, Mendoza Vineyards. Global blends are also not impossible. But then, to quote Bernard, nothing is.