A tantalising taste of Portugal Portuguese style port wines are enjoying growing popularity in South Africa and the exotic names of Portuguese cultivars such as Touriga Nacional and Tinta Barocca are now more familiar to than ever before.

Behind this trend lies the Klein Karoo town of Calitzdorp, home of the annual Calitzdorp Port & Wine Festival and many award-winning ports, earning its reputation as the port-style capital of South Africa. It’s here where De Krans made their first port in 1979. Their first Portuguese grape vines, planted in 1973, were believed to be Shiraz grapes, and it was only when the first grapes were harvested a few years later that they were identified as in fact Tinta Barocca – still a mainstay of their Portuguese and port-style wines. WineLand asked Boets Nel how De Krans Winery has embraced and expanded this legacy.

Was there already a well-established palate for Portuguese wines in South Africa or did it have to be developed over the years?

South Africans tended to avoid trying new wines and styles, and we have had to do a lot of marketing – which we keep up to this day. This market is definitively growing. Scandinavia, England and other European countries already have a sizable market for Portuguese wines.

What lies behind the decision to move to other Portuguese cultivars?

Initially we only wanted to improve our ports by introducing greater complexity with more cultivars, but since we developed the first Touriga Nacional red wine in South Africa in 2000, we have increasingly realised the value of these cultivars as still wines. We began making single-variety wines and in the last eight years we also introduced the Tritonia red blend, which has twice won the Best SA Red Blend (Non-Bordeaux) at the Old Mutual Trophy Wine Show and also won gold medal at the Six Nations wine competition the past two years. 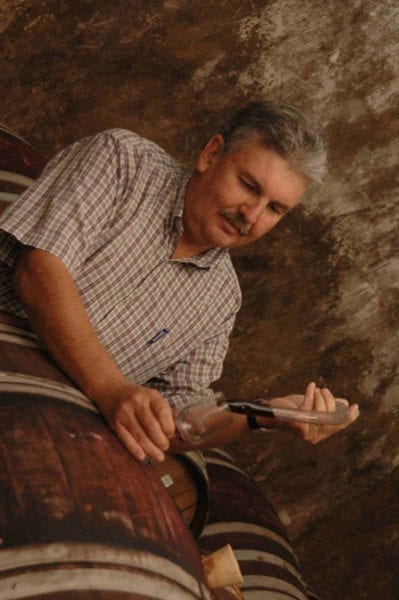 What makes the Terroir range special?

At De Krans we exclusively use Portuguese cultivars, which are quite well adapted to our climate and soil (hence the name ‘Terroir’). Our conditions are very similar to the Upper Douro Valley in Portugal.

What are the most common cultivars and how are they adapted to the South African climate?

Touriga Nacional was planted for the first time at De Krans in 1994, with 2000 seeing the maiden vintage dry red single-variety dry red. It has been a consistent achiever at the SA Novare Terroir awards. The Tritonia is named after a plant found in the botanically diverse Klein Karoo, and is a blend of Portuguese varieties including Touriga Nacional, Tinta Roriz, Tinta Barocca and Tinta Amarela.

Is there still space in the market for home grown Portuguese wines in South Africa?

Yes, I believe so. They make excellent food wines and are particularly well suited for venison, ostrich and springbok carpaccio.

Thanks to the Nel family of Calitzdorp, South Africans don’t have to hope for a case of mistaken identity before encountering the best of these exotic varieties.

More about De Krans and Calitzdorp’s Portuguese varieties at:  www.visitwinelands.co.za/blog/2019/discover-portuguese-varieties-in-the-wines-of-the-klein-karoo)