A word from Wanda 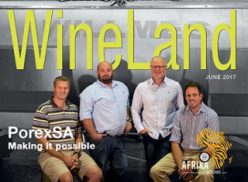 I recently read an interesting account about Africa and its economic outlook.

In Why Africa Is Poor author Greg Mills says after half a century of independence Africa has failed to realise its potential. He has a powerful and sometimes uncomfortable message: Poverty is optional! In his book he tackles issues such as how the world denies the continent the market and financial means to compete, poor infrastructure and trade, and the lack of development and technical expertise. He asks why Africa is lagging behind other developing regions when its people work hard and the continent is blessed with abundant natural resources. He concludes it all boils down to leadership and the choices we make.

When you think about the business of wine in Africa, South Africa immediately comes to mind.

Yes, we produce world-class wines. And yes, we have world-class winemakers.
We boast some of the oldest brands. KWV was awarded the title World-class Distiller
and Nederburg has been named one of the World’s Most Admired Wine Brands. With these kinds of treasures, why is the South African wine and brandy industry always on
the road to becoming a leader instead of leading the pack?

According to The Moss Group’s research findings on Brand SA, the growth of successful wine brands still doesn’t match that of spirits and RTDs. New consumers are unfamiliar with wine and face many entry barriers. It seems brand owners fail to grasp how wine’s inaccessibility affects consumer behaviour.

The future target market of wine consumers is scoped at 14.7 million, which is 43% of the potential liquor market and three times more than the current wine consumer groups combined. These figures represent a massive opportunity in the local market and should compel brand owners and industry leaders to take note and make the right choices.

They should realise they must go all out to get to know these consumers, and while they’re about it, utilise the tourism stream to the full. They need to work as a collective to make their marketing efforts affordable and get the maximum impact from their story.

Most of all, they shouldn’t miss out on golden opportunities. I wonder how many bottles of beer and Brutal Fruit are consumed by 110 000 people over a two-day period? That’s how many supporters attended the Cape Town Sevens – and not a single glass of wine in sight for the entire two days! It’s time to take ownership of initiatives to ensure maximum reach and impact. After all, a brand is no longer what we try to tell customers, it’s what they tell each other it is.

With the Wine Industry Strategic Exercise’s (Wise) shift to new markets, one being Africa, this is an ideal time to rethink Africa. Are we turning our visitors from up north into good wine ambassadors? Are we giving this continent enough thought and consideration? Africa may not offer easy short-term market solutions, but can we afford to ignore it?

With a total export of 16 976 454 litres, the African wine market features strongly in the ranking of South African export statistics in key target markets such as Angola, Nigeria, Kenya, Tanzania, Ghana and Uganda. This figure is comparatively small compared with our export to the rest of the world and yes, this is a tough market to penetrate and make your mark in. But with an area of about 30.2 million square kilometres, it’s the world’s second-biggest continent. It’s also the world’s second-most populous continent with an economy estimated to top US$2,6 trillion and consumer spend to reach US$1,4 trillion by 2020.

With the current transformation in the telecoms, banking, retail and construction industries in Africa, now is the time to seize the opportunities and boost your presence not only in the local market, but also in the rest of Africa where increasing urbanisation and affluence are fuelling a consumer boom. As Mills says, economic growth doesn’t demand a secret formula; all it asks is for leaders (and brand owners) to make the right choices.

This issue of WineLand with its focus on Africa provides plenty to chew on. Enjoy!