A day in the life of a sommelier 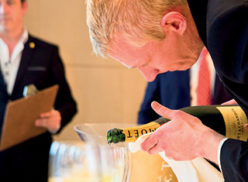 “Working for David has been a career highlight for me,” he says. “I never thought it would happen.”

Wikus, who studied a BCom Tourism at the University of Pretoria, never set out to become a sommelier. His interest in wine was piqued by a visit to Roots Restaurant at Forum Homini Hotel in Krugersdorp, where he worked upon completion of his studies. “I sat in on a blind wine tasting, and everyone around me started talking about the flavours and aromas they were picking up. Sommelier Francis Krone (back then of the Saxon Boutique Hotel) was also present and helped to solidify my interest. Francis won South Africa’s Young Sommelier competition, hosted by Chaîne des Rôtisseurs, in 2010. He’s still a mentor to me.”

Wikus says wine is a significant aspect of the hospitality industry, a belief that’s shared by Brenda Karamba, sommelier and manager at Makaron Restaurant at Majeka House in Stellenbosch. “A sommelier is a trained, knowledgeable wine professional who specialises in all aspects of wine service and wine and food pairing,” she says. “I was not very fond of alcohol, but it all changed after learning about wine and the process of making it and its role in hospitality.”

In South Africa, sommeliers’ expertise is not limited to wine only, but includes beverages such as coffee, beer and water. To win the Moët & Chandon Best Young Sommelier competition, Wikus had to successfully complete four rounds of theoretical tests. Entrants were judged by a panel of experts who tested their service prowess, proficiency at tasting and identifying spirits, and their knowledge of wine, including wine styles, regionality, terminology, regulations, storage and wine label information. Another critical criterion was entrants’ social skills and ability to interact with restaurant patrons.

“Guests who have unrealistic expectations, no matter how much you try to please them, can be a challenge when working in the tourism and hospitality industries,” Brenda says. “These patrons can potentially leave your establishment with a bad impression of both the restaurant and service professional.”

This is where the likes of Wikus come in. “Many people are scared when they open a new wine list,” he says. “Your job is to help to talk them through it. The market continues to change and interest in wine continues to grow. Five years ago guests would recognise three out of 10 wines. Today they understand nine out of 10 wines. They’re not only interested in Sauvignon Blanc but in Chenin, Viognier and other varietals. Their interest in dry rosé has also grown significantly.”

Besides keeping abreast with wine and food trends, Wikus is also responsible for training staff so they can guide guests through a diverse wine list.

Typically his workday begins at 8:00 when he double-checks his stock levels and receives deliveries. Often someone will also bring in new wines for tasting in the hope they’ll be added to the wine list. After working on the lunch service, he takes a break before working on the dinner service until 22:00. An important aspect of his job is to interact with his colleagues so he’s always aware of what’s happening on the restaurant floor and can improve service excellence.

Both Marble and Makaron were included in Eat Out’s prestigious 2017 top-30 list. For Brenda this was a huge personal achievement. Another important career milestone was being appointed Makaron’s restaurant manager.

With Wine & Spirit Education Trust (WSET) Level 2 under her belt, Brenda is currently preparing for Level 3. She would like to become one of the few qualified sommeliers in South Africa to complete a winemaking course and make her own wines.

Wikus, already a WSET Level 3-holder, was awarded a position in the South African Sommelier Association Level 2 course presented by the Sommelier Academy. He’s also been invited to compete in Moët & Chandon’s 2018 Best Young Sommelier South Africa challenge. His enthusiasm and dedication shine through when he talks about his determination to win this competition, which will hopefully lead to an entry in the world championships.

Wikus has huge respect for international sommeliers such as Arvid Rosengren, who was named the World’s Best Sommelier in 2016, and Master Sommeliers Brian McClintic and Justin Wilson. He’s also a great admirer of Gareth Ferreira, a South African now living in the United Kingdom. “Gareth’s path has been similar to mine,” he says. “He started in tourism and decided to become a sommelier instead of a general manager. Being a sommelier is a focused discipline. I like to focus on one thing rather than being a generalist.” l