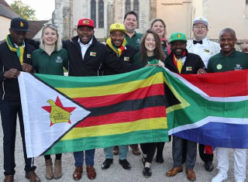 Team South Africa, entering for the fifth year, took five members while Team Zimbabwe had four members entering for the first time – all rock star somms from Cape Town. Another African at the event was Team New Zealand captain Cashias Gumbo, a Zimbabwean sommelier who cut his wine teeth in Cape Town before moving to New Zealand.

The winning nation was Sweden, followed by England, Luxembourg and then New Zealand! Congratulations to Cashias and his team. South Africa ended 14th out of 24 nations participating, while Team Zim came in at 23rd place.

Their participation would not have been possible without the enthusiastic support of their coach, educator, winemaker and top sommelier Jean Vincent Ridon, who has single-handedly managed to raise the profile of this competition and has been the teams’ tour guide and mentor. Before the competition, JV took both teams on a whistle-stop tour through some of the top wineries in France and Germany, exposing their taste buds to the best of the best.

Read more about the championship here.