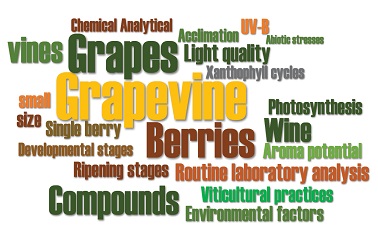 This review presents a summary of the chromatographic methods that have been developed and optimised to accurately profile and quantify grape metabolites. The goals were to establish routine methods that are suitable for samples sizes as low as a single berry, as well as have methods suitable for berries spanning all developmental stages, from green to ripe in both red and white cultivars. Methods are now validated for these matrices and the metabolites that can be measured include sugars, organic acids, amino acids, carotenoid and chlorophyll pigments, anthocyanins, monoterpenes, sesquiterpenes, C13-norisoprenoids, alcohols, acids and carbonyl compounds.

Metabolites determine the composition and quality of grape berries, as well as ultimately influencing wine quality. Several classes of berry metabolites such as sugars, organic acids, amino acids, carotenoids, anthocyanins, phenolic compounds and volatile aroma components are considered quality impact factors, as well as biomarkers for berry ripening and development. These primary and secondary metabolites are either synthesised in the berries or are transported from other organs of the plant to the berries. Another group of important aroma molecules, namely the C13-norisoprenoids is the product of oxidative breakdown of carotenoids by carotenoid cleavage enzymes. The accumulation of specific classes of volatile aroma compounds also defines the varietal character of cultivars which impacts on the quality and typicality of the resulting wines. For example, the sesquiterpene rotundone is a potent volatile aroma compound responsible for the typical black pepper aroma of some Shiraz wines. In addition to showing characteristic changes in levels depending on the berry stage, external factors such as environmental stresses, viticultural treatments, as well as infections can change the metabolic content of berries. Therefore, the quantification of major metabolites in grapevine berries is important for researchers, viticulturists and winemakers to evaluate the impact of external factors on grape quality.

When analysing metabolites, two broad approaches can be taken: An untargeted approach or a targeted approach. A good example of an untargeted approach is the application of liquid chromatography mass spectrometry (LC-MS) to detail the change in mainly anthocyanins, procyanidins and flavonols of grapes during berry development or at the ripening stage (Toffali et al., 2011). Equally important are more targeted methods to qualitatively and quantitatively analyse the changes in specific metabolites of interest throughout the berry development and ripening linked to an altered microclimate and/or viticultural practice. We chose targeted metabolic profiling using chromatography, namely high-performance liquid chromatography (HPLC) for non-volatiles and gas chromatography mass spectrometry (GC-MS) for volatile compounds. Since these methods typically require large amounts of sample material and long extraction steps, one of the goals was to reduce the sample size to allow for a list of analysis to be conducted from the same sample. Green and ripe berries are essentially different matrices, given their dramatic differences in sugar and acid levels. The methods were thus evaluated for suitability for all the berry developmental stages and the absence of berry matrix effects.

This paper presents a summary of the liquid and gas chromatographic methods that have been developed and optimised to accurately profile and quantify grape metabolites from small amounts of plant tissues adapted for routine laboratory analysis. Figure 1 summarises the workflows and Table 1 presents the metabolites that can be measured. These methods were accurate for less than 2 g of fresh tissue, representing a single berry and a single injection per analysis type. 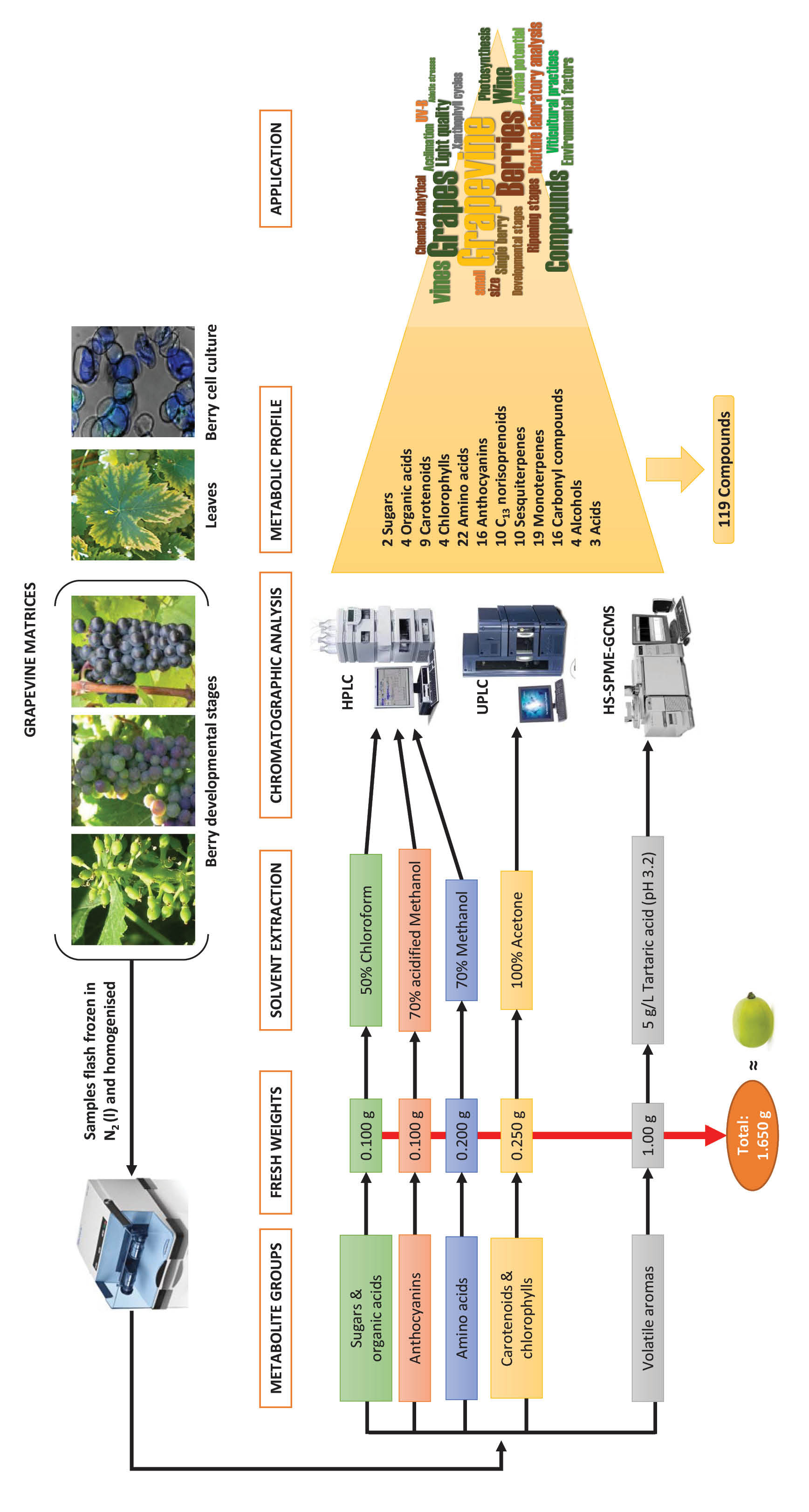 FIGURE 1. A summary of the analytical methods optimised and validated for the analysis of grapevine berries, leaves and cell cultures from small sample sizes.

The extraction of sugars and organic acids from grape berries was adapted from Broeckling et al., 2005, originally using approximately 1 g of frozen ground berry tissues. This amount was downscaled to 80 – 100 mg of starting material to extract in 1.2 mℓ 50% (v/v) chloroform (Table 1). The complete analysis of major organic acids and sugars was achieved simultaneously using a single injection per sample by combining diode array (DAD) (for organic acids) and refractive index (RID) (for sugars) detectors in 40 min. This significantly reduced the total analysis time per sample compared to previous methods. This method, which is also adapted to must and wine samples, identifies two sugars, five acids and four alcohols including glycerol, methanol, isopropanol and ethanol (Figure 1 and Table 1), (Eyéghé-Bickong et al., 2012).

A method for pigment extraction was developed and optimised previously by Lashbrooke et al., 2010, for HPLC analysis on a C30 column, with a run-time of 45 min per analysis. This HPLC method proved well adapted for ultra-performance liquid chromatography (UPLC) separation using a Shield RP18 column that could be completed in 15 min (Young et al., 2016). This method was validated to identify 14 pigments which include eight xanthophylls and derivatives, two carotenoids and four chlorophylls and derivatives (Figure 1 and Table 1).

The method for the extraction of major anthocyanins was adapted from Iland et al., 1996, that uses 1 g of berry tissue in 100 mℓ of 50% (v/v) EtOH. This method was successfully downscaled to 100 mg of frozen ground berry tissues in 1 mℓ of 70% (v/v) MeOH containing 0.1% (v/v) HCl, reducing 10-fold the sample amount (Figure 1). The HPLC analysis was achieved on a Prodigy ODS-2 column using a 10% (v/v) formic acid and acetonitrile gradient for 40 min. The method was validated to profile 16 anthocyanins (five 3-O-glucosides, five acetyl-3-O-glucoside and six coumaroyl-glucosides) and four unidentified flavonols (Figure 1 and Table 1).

An amino acid extraction method was adapted from Antalick et al., 2015, using approximately 200 mg of ground frozen berry tissues in 0.5 mℓ of 70% (v/v) MeOH, spiked with two internal standards, sarcosine and norvaline. This method supported the extractability of the major amino acids, while still allowing the abundant amino acids to fit in the calibration window. The separation of amino acids was achieved after derivatisation on HPLC using a Zorbax Eclipse Plus C18 Rapid Resolution column for 25 min using a fluorescent detector (FLD) according to Suklje et al., 2015. The method successfully allowed the separation and quantification of 22 amino acids and derivatives, one dipeptide and seven unidentified compounds (Figure 1 and Table 1).

A set of four liquid chromatographic and one gas chromatographic method was optimised and validated to accurately determine the profiles and/or levels of metabolites in grape berries at different developmental stages, as well as several other matrices. More than 119 metabolites could be extracted and accurately analysed from less than 2 g of berry tissue representing a single berry using a single injection per method. These methods are suitable for multiple analyses and were successfully developed within research projects of the Institute for Wine Biotechnology, Department of Viticulture and Oenology (DVO) and have already supported several viticultural publications (Eyéghé-Bickong et al., 2012, Young et al., 2016, Joubert et al., 2016 and Musingarabwi et al., 2015). These validated methods and their standard operating procedures (SOPs) also form part of the training initiatives of the Viticultural platform of the Institute of Grape and Wine Sciences (IGWS), DVO at Stellenbosch University. Data generated from these analyses will also serve as reference values of compounds targeted to be measured more autonomously with the use of handheld or robotic sensor devices to improve the monitoring, harvesting and processing of quality grapes. This forms part of the IGWS flagship project on “Automation, Robotics, Sensors and Intelligent Systems for Viticulture South Africa” currently ongoing in the DVO at Stellenbosch University.

This work was supported by grants from Winetech, the South African Table Grape Industry (SATI), the South African Technology and Human Resources for Industry Programme (THRIP), the South African National Research Foundation (NRF), the Institute for Wine Biotechnology (IWBT) and the IGWS, DVO, Stellenbosch University. A special acknowledgement is given to Anke Berry from the IGWS, for her technical support in facilitating and implementing the SOPs for the training initiatives of the Viticultural platform. Lastly, the following people are recognised for their participation in making these analyses possible: Lucky Mokwena, Malcolm Taylor and Dr. Marietjie Stander for support at the Central Analytical Facility (CAF) of Stellenbosch University; Nina Lawrence, Dr. Katja Suklje and Prof. Antonio C. Ferreira for their respective input in the initial development of some of the methods.

Eyéghé-Bickong, H.A., Alexandersson, E.O., Gouws, L., Young, P.R. & Vivier, M.A. 2012. Optimisation and validation of an HPLC method for the simultaneous quantification of the major sugars and organic acids in grapevine berries. Journal of Chromatography B 885: 43 – 49.

Lashbrooke, J.G., Young, P.R., Strever, A.E., Stander, C. & Vivier, M.A., 2010. The development of a method for the extraction of carotenoids and chlorophylls from grapevine leaves and berries for HPLC profiling. Australian Journal of Grape and Wine Research 16: 349 – 360.

This article originates from research funded by Winetech and the final report of IWBT 5-08A, “The isolation, cloning and characterisation of novel antifungal genes and their encoded products for use in resistance strategies against fungal pathogens of Vitis vinifera”, IWBT 5-09B, “Isolation and characterisation of carotenoid pathway genes and promoters from Vitis vinifera as resources towards stress-tolerant grapes with superior quality”, and IWBT P 08-13, “Metabolic engineering of grapevine towards enhanced abiotic stress resistance and improved quality parameters”, can be downloaded from http://www.sawislibrary.co.za/dbtextimages/VivierMA4.pdf, http://www.sawislibrary.co.za/dbtextimages/VivierMA.pdf and http://www.sawislibrary.co.za/dbtextimages/Vivier.pdf.