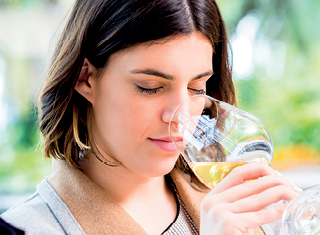 This article reports on progress made in addressing the first of the undermentioned two challenges, and in particular focuses on our ability to predict the production of aroma compounds by different strains of yeast.

“Complex” is one of the most commonly used, though vague, descriptors of wine, and, while most frequently heard at wine tastings, is equally “popular” with wine scientists. From a scientific perspective there are two major challenges:

Aroma and flavour complexity is a reflection of the incredibly large number of volatile and non-volatile aroma and flavour active compounds in any given wine. While significant progress has been made over the past decades to identify and characterise these compounds, we are still far from having established the full chemical profile of wine. The vast majority of flavour- or aroma-active compounds in wine are directly derived from the metabolic activities of grapes and of a large number of microbial species, while some emerge as the result of spontaneous chemical reactions during the production and ageing processes (Styger et al., 2011b). A crucial part of this puzzle is the metabolic activities of the dominant yeast/s responsible for alcoholic fermentation.

Yeast indeed impact on wine aroma and flavour in several ways, including:

Besides the primary and structure-impacting compounds (ethanol and glycerol) produced by yeast as it ferments sugars, a large number of volatile compounds are produced during fermentation, many of which directly contribute to the organoleptic character, and therefore quality, of the wine. Most commonly several thiols, esters and higher alcohols have been highlighted as being the most relevant of these compounds, but volatile acids, aldehydes and terpenes are other groups of compounds that can be significantly produced during the fermentation process.

However, current knowledge of the metabolic pathways and chemical processes responsible for the production of these impact metabolites by yeast is incomplete. Our understanding of these processes, and how external influences and fermentation practices/parameters impact the production of important aroma compounds, is key to our ability to ‘control’ aroma outcomes. Research conducted at the Institute for Wine Biotechnology (Stellenbosch University) seeks to improve our current understanding of how aroma compounds are formed, what factors influence their production, and how different yeast strains and species (with different genetic characteristics) lead to distinct aroma profile variations.

Secondary metabolic pathways involved in the production of flavour-active compounds are not as well characterised as primary fermentation. Some branches of this network are, however, fairly well known from a biochemical perspective. The best-known of these is the Ehrlich pathway: In this pathway, the amino acids leucine, valine and isoleucine are deaminated to the corresponding -ketoacids. -Ketoacids are then decarboxylated and converted to the corresponding branched-chain aldehyde, and finally converted to higher alcohols by the aryl alcohol dehydrogenase family or by one of a possible seven alcohol dehydrogenase enzymes. Ester formation results from an enzyme-catalysed condensation reaction between an activated acyl-coenzyme A and a higher alcohol.

Although this may seem fairly straight-forward, much remains to be discovered regarding the regulation of this pathway. The findings of students at the Institute for Wine Biotechnology highlighted the fact that these pathways are not strictly linear, as many of the intermediates of these pathways are shared within the different branches of the aroma compound reaction network, as well as with other pathways related to fatty acid metabolism, glycolysis and stress tolerance. Moreover, the importance of the yeast cellular redox balance (the ratios of co-factors, such as NAD+ and NADH) was shown to be important in determining the directionality of the reactions, as reactions could proceed in either the forward or reverse direction depending on this co-factor balance. Entire pathways, as well as individual reactions within a pathway, are also influenced by factors such as total nitrogen and amino acid availability.

Comparative analyses of different yeast strains with different genetic make-ups enabled us to establish the genetic and metabolic factors that most strongly impact these aromatic compounds. An example of a data set is shown in Figure 1, and highlights how a small difference in the genetic make-up of a yeast (in this case increased expression of the BAT2 gene) will change its ability to produce specific aromatic compounds. Many of the aroma impacts that were observed were unexpected and would not simply have been predicted based on a linear analysis of the pathways involved. In the case of the example in Figure 2, increased expression of BAT2 led to the predictable increase in downstream higher alcohols in the Ehrlich pathway. However, significant impacts were also evident in other, unrelated pathways such as fatty acid metabolism. 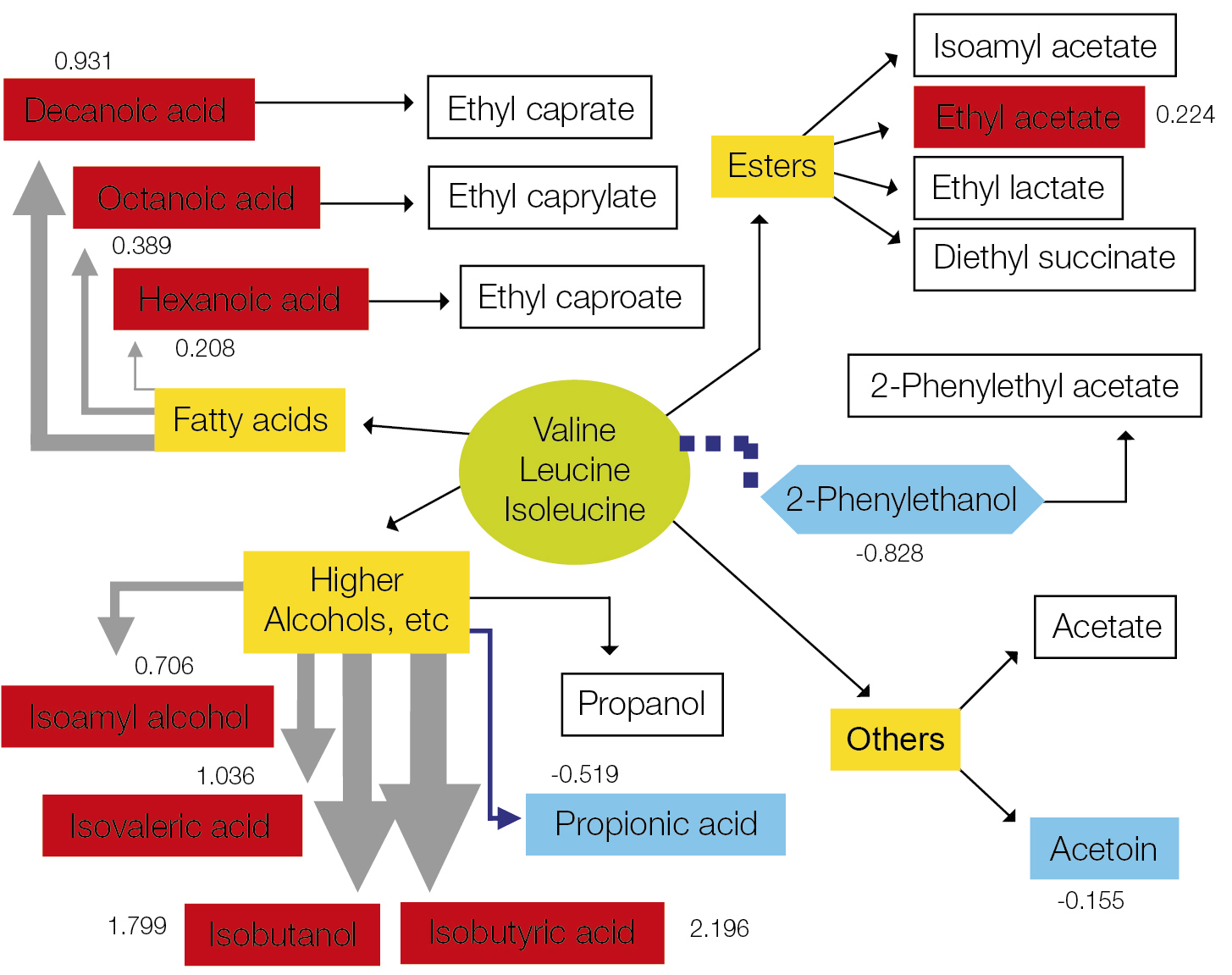 FIGURE 1. Impact of changes in branched chain aminotransferase (BAT2) expression on products of secondary metabolism. Compounds in red were increased, while compounds in blue were decreased in concentration (no change for unshaded compounds) relative to the control yeast. Adapted from Styger et al., 2011a.

In order to address the shortcomings of the more simplified strain comparisons, we pursued a follow-up ‘systems biology’ approach to look at entire yeast gene expression sets in conjunction with metabolic data. The aim was to look at the metabolic networks from a broader, unbiased point of view to model strain behaviour and aroma in a manner that ‘predicts’ the unexpected aromatic outcomes as well. In this way, we have been able to categorise the different enzymatic activities that most significantly impact on aroma formation, and predict to a large degree the impact of changes in gene expression on aroma compound production by yeast. 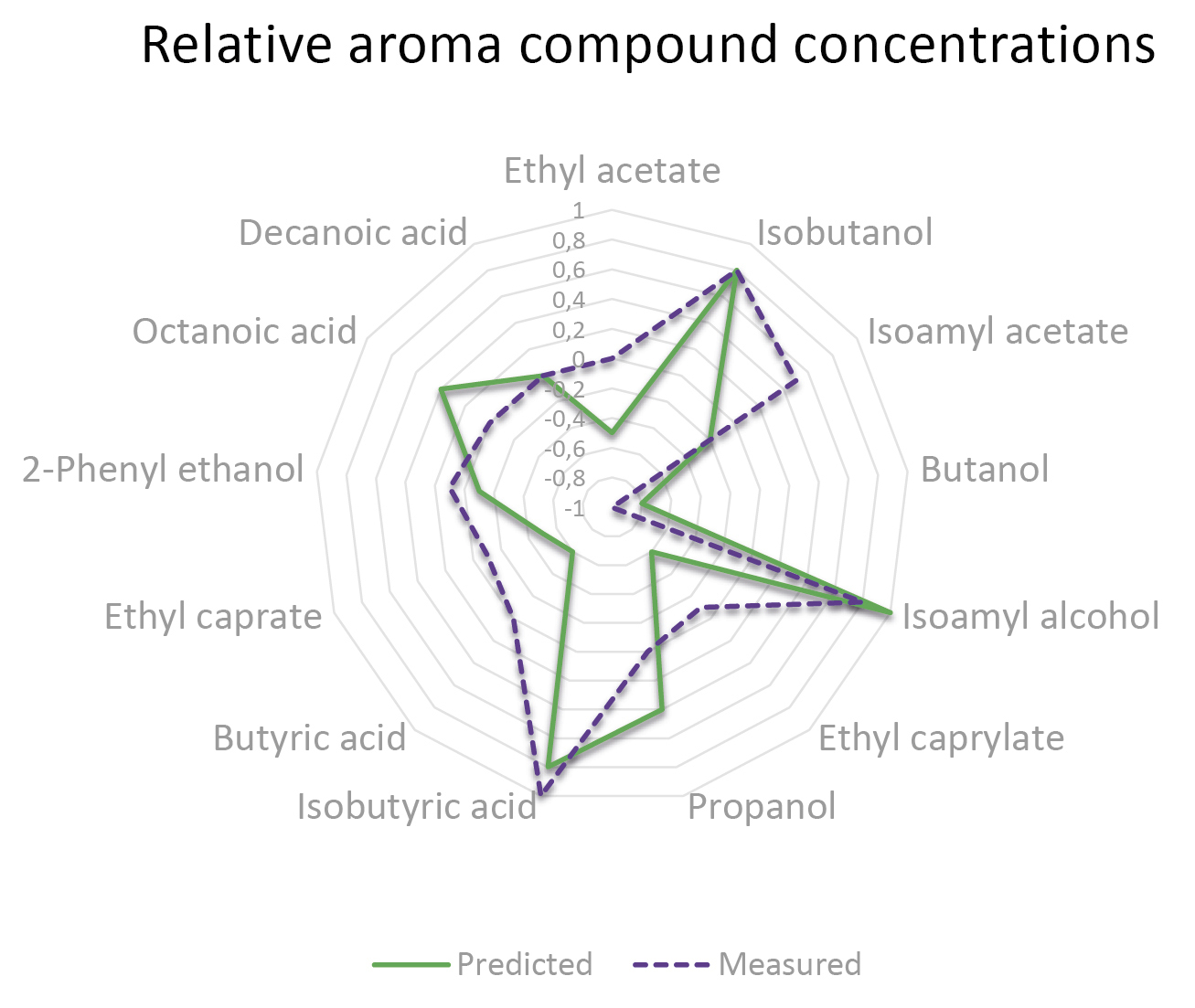 Figure 2 highlights one of many examples of genes for which we can now predict to a large degree the impact of changes in expression on the outputs of the metabolic system responsible for aroma production (Rossouw et al., 2008; 2012). Understanding the ‘layout’ of the aroma production system, and how it is regulated is central to our ability to assess the impact of different yeast strains and fermentation treatments on aroma outcomes. Moreover, it was found that some of the genes/enzymes which impact on aroma compound production are not directly part of the metabolic pathways that are responsible for the direct production of these compounds, but rather affect general processes of metabolic balance, such as the redox status of the cell (Styger et al., 2011; Jain et al., 2012). Taken together, this information has resulted in us being able to predict the metabolic output (i.e. which aromatic compounds will be produced) in response to changes in genetic factors. Similarly, we are currently analysing the impact of environmental factors and winemaking practices, such as nutrient addition, will have on these metabolic systems.

It is clear that the interplay between the constantly changing must composition throughout fermentation, in conjunction with environmental factors, the metabolic activity of the particular yeast strain/s and interaction with any other microorganisms present determine the aroma profile produced by the fermenting yeast. Ongoing work at the IWBT seeks to understand the impact which nitrogen, amino acids and other nutrients (lipids in particular) have on the secondary metabolic network of yeast and thus production of impact compounds. Another important focus area involves the aroma metabolism of wine-relevant non-Saccharomyces yeasts, as the metabolism of these yeast species has not been well studied (or at all). Moreover, the impact of amino acids and other nutrients on aroma likewise need to be established for these species as well.

Given that multispecies fermentations are becoming ever more popular (whether spontaneous fermentations or inoculated multispecies fermentations) it is also important to determine what impact the interactions between different yeast species will have in terms of modulating the aroma outputs of the species involved. While microbial complexity puts several new variables on the table in terms of understanding aroma formation, it also creates opportunities to create new and exciting wine styles, or improve the aromatic quality of wines in general. However, in order for winemakers to exploit the potential of multispecies fermentations (in a reliable and reproducible manner) and capitalise on the aromatic benefits of specialised nutrient additions, it is first necessary to understand the wine aroma system as a whole. While many pieces of the aroma puzzle have been fitted in recent years, emerging trends in a continuously adapting and competitive industry mean that this remains an ever-evolving field of research.