As good as it gets for Boplaas 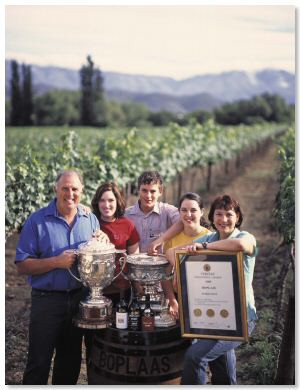 If things were ever on the up for Boplaas Vineyards, they are so right now. This intrepid Calitzdorp cellar is riding a massive wave of competition success and recognition – both domestically and abroad. But this is only part of the rosy picture from a part of the world that is, ironically, at this point in time grey and parched from a severe drought. Fortunately, the subsequently reduced harvest is very healthy and promises particularly characterful red wines, including those intended for port production. And this, of course, is where it counts, Boplaas specialises in ports and red table wines and these are bringing in the accolades. What is more, there has been some positive news on the international port front with regard to restrictions on terms used in the EU (see report under Newsline).

Then, on a personal note, owner-cellarmaster Carel Nel and his right-hand man in the cellar, Alwyn Liebenberg, have over a period of three years together developed a great understanding and synergy, after Carel had fought a lone battle for many years. This complemented by expert assistance in the vineyard – from VinPro viticulturist Willem Botha and farm manager Pieter Terblanche. And don’t forget the growing Nel family input. Carel has reason to beam with pride when wife Jeanne and daughters Rozanne and Margaux work beside him in administration, marketing and winemaking respectively. This development is now manifested in the words “Family Vineyards” featuring on the wine labels – continuing a family tradition dating back to the 1880s here in the valley of the Nels River at the foothills of the mighty Swartberg Mountains … And, just to further explain the bright Boplaas picture, the bi-ennial Calitzdorp Port Festival is also on the up again after some rethinking and change. With his passion and single-minded purposefulness, Carel can take plenty of credit for rallying together the local producers and community to believe in their place and products and to strive for ever-better quality … to forge this Klein-Karoo town’s standing as the country’s Port Mecca.

After the sad passing away of Tony Mossop (owner of Axe Hill at Calitzdorp), Carel now finds himself back in the driving seat of the South African Port Producers’ Association (Sappa), as acting chairperson – the organisation which has since 1993 played a significant role in the EU negotiations. Meanwhile, back at the ranch, Carel reports that Boplaas’ total crop is some 6% down, but he is getting “excellent quality” grapes for the red wines and ports … also top quality Shiraz and Sauvignon Blanc from the Upper Langkloof and the slopes of the Outeniqua Mountains respectively.

“The dry conditions ensured healthy grapes, but we had a need for more nitrogen during fermentation.

“The reserve port looks stunning. We had small berries with good intensity and deep colours. And our hard work put into canopy management, reducing the crop and ensuring there’s enough leaves per bunch of grapes, is really paying off. Our dedicated cellar workers toil for long hours to ensure that the maximum colour and flavours are extracted on the red wines and ports. The top grape pickers pick up to one ton of grapes per day. All the grapes at Boplaas are handpicked to ensure quality.”

Although famous for port wines and now really making an impact on the red wine scene, Boplaas has a particlarly diverse portfolio of wines. The most popular is the Ruby Port, followed by Cabernet Sauvignon, Merlot, Sauvignon Blanc and Pinot Noir Sparkling. Altogether 10% of the total 40 000 cases produced are exported.

The recent run of competition success has obviously increased demand – and made life easier to build the Boplaas and Carel Nel brands from a winery based so deeply into the hinterland. Let’s recap on these successes:

What about the future

“For the foreseeable future, Boplaas will be purchasing grapes from Morné Jonker in the Upper Langkloof – where the Shiraz for the SA Champion Red Blend originated from. This is one the coolest sites in the country and these grapes will be used to supplement the exceptional grapes coming from our own vineyards to add more complexity to our wines. The first Shiraz made at the Upper Langkloof is charming red wine ageing in new French oak. The SA Champion Shiraz/Cabernet will be released in June 2006.”

“My further ambitions are to make word-class Sauvignon Blanc and Shiraz – both wines which I’m very fond of.”

The younger generation Nels will probably soon start featuring in realising further ideals. Elder daughter Rozanne is involved in marketing, while Margaux is doing her final year BSc Viticulture and Oenology at the US … but young Daniël (14) still has a long way to go to follow in the footsteps of Calitzdorp’s Mr Port.

In a 150 km radius around Calitzdorp more plant species can be found than in the whole of Europe. Boplaas uses part of its export earnings to protect hundreds of endangered plant species, including succulents and fynbos on 2 200 ha of its land specially bought for preservation. The salary of a full-time warden, who also tends fences and combats soil erasion, is paid by these funds.

The Cap Classique Producers Association has re-positioned its marketing objectives to highlight the importance of time in the making... END_OF_DOCUMENT_TOKEN_TO_BE_REPLACED

The South African wine industry acknowledges the greater understanding from government with the announcement of the latest excise duties... END_OF_DOCUMENT_TOKEN_TO_BE_REPLACED

The wine industry body Vinpro recently appointed Dr Langelihle (Langa) Simela to its board to provide strategic insights into... END_OF_DOCUMENT_TOKEN_TO_BE_REPLACED
Go Back
Shares