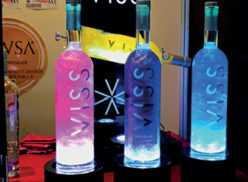 With instant customs clearance in all 42 Chinese mainland customs districts, Hong Kong should be on every exporter’s radar.

The 10th edition of the Hong Kong International Wine & Spirits Fair was a huge success. According to organisers Hong Kong Trade Development Council (HKTDC), a total of 1 070 exhibitors from 38 countries and regions presented exquisite wines from around the world.

With nearly 20 000 trade buyers from 70 countries and regions taking part in the three-day fair, attendance figures were up by 2.3% compared with 2016. Countries such as the Chinese mainland, Malaysia, Vietnam, France, the United States, Australia and Chile recorded an encouraging growth in attendance from 9 500 exhibitors, creating a vibrant platform for business.

Guest of honour at the opening and financial secretary of the Hong Kong Special Administrative Region (HKSAR) government Paul Chan used the occasion to announce wine re-exported from Hong Kong would enjoy instant customs clearance in all 42 mainland customs districts with immediate effect. In the past these measures were applicable to only five mainland customs districts, namely Beijing, Shanghai, Tianjin, Guangzhou and Shenzhen.

Under the customs facilitation scheme, preregistered Hong Kong wine traders can submit advance wine consignment information online and enjoy instant customs clearance when the consignments arrive at mainland ports. These measures apply only to wines re-exported to the mainland through Hong Kong.

HKTDC deputy executive director Benjamin Chau welcomed the new measures. “Since the HKSAR government eliminated all duty-related customs on wine and implemented special clearance measures under the Closer Economic Partnership Arrangement in 2008, Hong Kong has developed into a wine trading and distribution centre for the region,” he says. “In particular, Hong Kong has become a platform for trading wine with the mainland, which has long been the largest market for wines re-exported from the city. As the facilitation measures have now been extended to all customs districts, our wine traders will enjoy faster customs clearance and greater certainty when re-exporting wines through Hong Kong.

“By adding to our advantages such as advanced infrastructure and transportation networks and experienced industry professionals, the new measures will further bolster Hong Kong’s standing as a wine trading hub by attracting more global wine traders to access the mainland market through the city.”

To provide the industry with a comprehensive trading and exchange platform, the HKTDC organised more than 70 events at last year’s fair. These included the Asia Wine Academy where Masters of Wine Jeannie Cho Lee and Steve Charters hosted two intensive workshops on Contemporary Trends in Wine Consumption and Mastering Tasting and Rising Wine Trends.

Another interesting event was the Wine Industry Conference where Master of Wine Debra Meiburg conducted the session on Trends to Watch in 2018: The Business of Bubbles and Beyond. Other highlights were the Champagne Avenue, which showcased products from seven champagne makers from four wine regions in Champagne, and wine tastings from small and medium-sized wine producers.

It was clear from the start that Asian buyers are thirsty for international wines. “We’ve met many buyers, especially those from Hong Kong, the Chinese mainland, Taiwan and Japan who’ve expressed strong interest in our champagnes,” says Clotilde Chauvet, a winemaker at French Champagne supplier Marc Chauvet. “We see strong potential for growth for the champagne market in Asia.”

This was confirmed when Johnson Chang, purchasing director at the renowned mainland-based wine e-tailer and service provider 1919 Wines & Spirits Platform Science and Technology Co Ltd, placed wine orders for 150 000 bottles with a French exhibitor and 27 containers with an Australian exhibitor. “The HKTDC’s business-matching service has helped us reach different exhibitors and enhanced our sourcing efficiency,” Clotilde says.

From a South African perspective, most of the exhibitors at the fair expressed optimism and enthusiasm about having had the opportunity to meet with various buyers from mainland China.

“Our wines attracted a lot of interest, especially the premium and older red wines and our natural sweet wines,” Glen Carlou winemaker Johnnie Calitz says. “The Hong Kong International Wine & Spirits Fair was definitely the right choice for us. We’re in the early stages of discovering the East and this fair offered plenty of opportunities and direction. Are these kind of exhibitions still relevant? For sure!”

Wellington Wines sales and export manager Mauritius du Toit agrees. “This was a strategic move from us to explore our options in China where there’s been huge growth in packaged wine. This fair once again made me realise the size of the Asian demand for good quality South African wine, although the competition is very strong and the market is dominated by wines from France, Italy, Australia, Chile and Argentina.”

With China as one of Wellington Wines’ fastest growing markets, Mauritius was extremely happy with the additional enquiries and orders from new importers and distributors in various provinces in China. “But China was not our only focus,” he says. “We also sourced new business from India, Sri-Lanka and Singapore. White wine was not exactly on the cards before, so what excites me the most about the Chinese market now are the enquiries specifically about Chenin Blanc. Pinotage was also a great star in the red wine category. And the prices were not only entry-level prices. There was also great demand for premium, super and ultra-premium wines with prices to match.”

For Doolhof Wines winemaker Gielie Beukes the Hong Kong Wine & Spirits Fair is part of their marketing strategy abroad. “Hong Kong remains a good contact point with Southeast Asia and the southern mainland of China which both offer strong economic hot spots. Continuous exposure increases trust and attracts interest, so it’s important for us to continue working on these existing relationships. We already have an importer in China but the scope of population distribution in China offers endless possibilities.”

A word from Wosa

With this kind of feedback, it was disappointing to see so little South African representation at the fair which was dominated by exhibitors from France, Italy, Spain and Australia. Only nine SA brands were represented. They were Capaia Wines, Cape Wine Company, Doolhof, Glen Carlou Vineyards, Origin Wine (Grand Vin Stellenbosch), Robinson & Sinclair who represented Lanzerac, Cape Point Vineyards, Wellington Wines and Constantia Uitsig.

“Since its launch in 2008, the fair has been increasing in size and diversity as more and more wine, spirts and more recently also beer companies explore opportunities in Asia,” Wines of South Africa (Wosa) marketing manager in Hong Kong Michaela Stander says. “We’ve organised a pavilion since 2008, but due to lack of interest from the industry in 2016 and last year, there’s been no official pavilion at the event for the past two years.

“Nonetheless, seven SA wine companies took part in the SA pavilion package compared with only five companies in 2016. Five of these companies took part for the second or third time and cited the professional organisation of the fair as one of the reasons for returning to the event. It’s important for exhibitors to have a clear idea of the target audience and sales channel they want. That should direct you to which exhibition you take part in.”

“South African wine exports to Hong Kong increased by 80% in volume terms during the first half of 2017, largely in part to more SA wine companies targeting Asia, ongoing in-market promotions such as the annual Wosa Discover SA Campaign, which was recognised as Best Trade Campaign at the recent Drinks Business Asia Awards, and visitor and education programmes. It’s encouraging to see more and more SA wine companies visiting the market and supporting their importers, and new-to-market wine companies taking part in trade shows.

“We’ve noticed a decrease in the value of exports and with China increasing in importance as export destination, we need to renew efforts to promote sustainable volume growth while actively seeking value growth. China is currently South Africa’s sixth largest export market for packaged wines by volume, and the largest in the Asian region.”

“Staying up to date with the latest trends offers valuable insights into how to grow and harness market potential,” she says. “Once you’ve appointed an importer, regular visits to the market are essential to gain understanding of where your products are or will be sold and support your importer’s activities to create awareness of and sell-through for your products.

“It’s clear traders and consumers are increasingly discovering and appreciating the quality the South African wine category has to offer. Another area of potential to explore is promoting South Africa as a wine tourism destination. Not only is there a clear correlation between tourism and growth in wine exports, but wine tourism adds value to the industry through cellar door sales and spend on value-added services and outlets such as tour operators, winery restaurants, hotels, guest houses and golf courses.

“Cape Town is consistently rated one of the top international tourist destinations by key media such as TripAdvisor, CNN and Conde Nast. We’ve seen some increases in Chinese tourists to South Africa and with 2018 marking 20 years of excellent bilateral relations between the two countries, and the Cape Wine, it could provide a good platform to promote South Africa as a favoured wine tourism destination for Chinese traders and consumers.” 

The South African wine category saw exponential growth in China from 2013-2016. The volume for 2016 was double that of 2013 and we’re now in seventh place in terms of origin for imported wine. Looking at the most recent statistics for the 12-month period ended September 2017, South Africa exported about 17.4 million litres wine to mainland China, which is an increase of 35% compared with the same period in 2016. However this growth was mainly due to an increase in bulk wine exports (up 120%), while packaged export volumes remained unchanged at about 9.15 million litres.