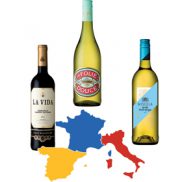 Origin is rapidly expanding its global footprint. With new operations in France, Italy, Spain, Australia, Chile and America, it aims to increase its international business to equal current exports from South Africa within the next two years.

To secure a supply of grapes for Origin’s growing premium brand, Mendoza Vineyards, Origin acquired 32 ha of premium Malbec vineyards in Mendoza, Argentina, and intends to develop its premium Malbec offering through the Magna Finca brand.

The North-American market is Origin’s top priority. By partnering with Maison Des Futailles in Montreal, Canada, it has access to complete production and packing facilities in Quebec, which is right on the doorstep of America’s East Coast.

Bernard Fontannaz has a sharp eye for opportunities. The founder of Origin, specialist supplier to the global wine retail business, has become renowned, even notorious, for his innovative and sometimes radical approach. “We try not to get stuck in structures and red tape. It’s about being allowed to push boundaries all the time,” he says.

Fontannaz walks the talk, with the global operations supplying significant and increasing quantities to the UK, the Netherlands, Scandinavia, Russia and Canada.

Expanding beyond its established bases in South Africa and Argentina, Origin has ventured into supplying wine from prominent wine regions of both the Old and New World. Swiss-born Fontannaz says every region has its own opportunities and challenges.

“The Old World has historical complexities and can do with more simplification and transparency. Applying a NewWorld approach to the retailing of Old World wines with their inherent heritage holds massive opportunities,” he says.

International expansion has had the added advantage of exposing Origin to various global practices and worldviews. “Travelling and getting involved at grassroots level has been a real experience with healthy challenges as opposed to maintaining the status quo.”

Origin’s strategic partnership with French producer Vinadeis, which produces more than 20% of the Languedoc region’s wines, proves it means serious business and offers a home base for its French brand, La Folie Douce.

Integration into the value chain is another key aspect of Origin’s expansion strategy. The company recently invested in an Antwerpbased bottling plant, now renamed Logico Wine Solutions. “This will be our one-stop shop for all non-South African wines and allow us to efficiently supply our clients in Europe,” Fontannaz says.

Global expansion also entails boosting business in South Africa. Origin’s acquisition of Devon View – renamed Grand Domaine – in Stellenbosch, is its first investment in vineyards and highlights its commitment to the country in which this now global business was established.

Fontannaz says Sauvignon Blanc is one of South Africa’s most important cards to play as the style suits Origin consumers’ tastes and fits in snuggly between the Old and New World.

With Origin’s emphasis on wine retail, traceability and certification are regarded as gamechangers. Fontannaz says South Africa’s sophisticated Wine of Origin and certification systems, including Wieta and IPW, have not been emphasised enough as areas of distinction in the New World. Ethically certified wines, including organic wines, are deemed serious considerations – not only in terms of business, but also to sustainably grow the industry in a broader sense.

Origin has also been vocal about the importance of bottling at source through the #CreatingValue@Origin campaign. Fontannaz regards this requirement more important than ever, particularly keeping in mind trade agreements and Common Custom Tariffs (CCT) with the European Union.

When it comes to markets, Fontannaz says South Africa shouldn’t discount China. South African wine exports to China have doubled over the past two years and with a dedicated Asian market manager Origin is set to claim its share of the action. Why are we not surprised!