Celebrating its 21st harvest this year, family-owned Avondale near Paarl is firmly established as a pioneer of biodynamic winemaking. Known for terroir-driven organic wines perfected by biodynamic methods, Avondale’s philosophy is to keep the winemaking process as close to the earth and as true to nature as possible. 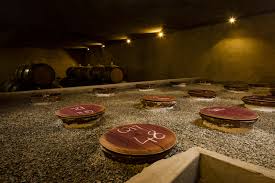 Owner Johnathan Grieve and winemaker Corné Marais began thinking about the next step in natural winemaking six years ago. Having successfully experimented with clay amphorae, was a natural evolution of the farm’s journey. These traditional clay vessels don’t impart characteristics to the wine as wood does, nor do they isolate the wine from the environment as much as concrete eggs.

Corné visited Georgia to learn the methods and identify a craftsman who practises the traditional methods as they had been passed on for thousands of years. “I eventually settled on Nodari Kapanadze, a qvevri master in a village in the Imeretian Mountains,” he says.

A journey of discovery

Qvevri means ‘that which is buried’, as the vessels are sunk up to their necks in the soil for insolation and stability. The soil not only prevent them from cracking from the pressure of fermentation, but also dissipates some of the heat generated in the process. Avondale’s minimal-intervention approach means fermentation is left to the slow pace and warmer temperatures of natural yeasts.

The 24 qvevri arrived at Avondale late January 2018, just in time for the harvest. Their sizes vary from 800-1000 litres due to being wholly handmade and slowly fired in a mountain-side kiln over a period of weeks. Heat shrinks the clay, with higher temperatures translating into lower permeability. Qvevri are fired at lower temperatures than amphorae, making them more porous. Johnathan sees these natural properties as part and parcel of the natural winemaking process and something to embrace.

The environment continues to play a role during the qvevri’s installation. Qvevri are traditionally lined with beeswax on the inside which, in addition to the surrounding soil, reduces the oxygen flow. The net effects means micro-oxygenisation is even more constant than in amphorae.

Pure beeswax has waterproofing and sterilizing properties that makes the inside more hygienic and easy to clean. On the outside, a coating of lime protects the qvevri and its contents from bugs and contaminants. Filling, emptying, cleaning and maintaining the qvevri is a manual process.

Experimentation with Chenin already shows immense character and promise. Wines made in qvevri have a distinctly different character from the same vintage fermented in oak or steel tanks, and even amphorae. “We’ve brought our learning from the amphorae and fermenting the Chenin Blanc in three ways: whole-bunch, de-stemmed with skins, and pure pressed juice,” says Corné. “Naturally the reds will only make use of whole-bunch and de-stemmed methods.”

Warmer fermentation in qvevri favours the core fruit character of the grapes, which magnifies the variety and soil’s characteristics. The result is riper tannins, increased texture and minerality, while preserving natural acidity.

“Qvevri-style wine is a niche product for developed tastes,” says Johnathan. “The wines will mostly be employed as a component in blends.”

But it would be a mistake to underestimate Avondale’s innovation. If terroir-specific wines and methods have this much potential, chances are good you’ll be joining Avondale’s wine club soon.