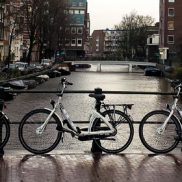 Bulk wine is important to the South African wine industry, but with lower-than-average prices and an increase in competition there’s a growing need for solidarity and innovation among producers.

The seventh annual World Bulk Wine Exhibition was held in Amsterdam in November last year and with a 15% increase in the number of participating professionals compared with the previous year and visitors from 66 different countries it was bigger and more relevant than ever.

There has been a downward shift in the share of bottled wine between 2000 and 2014, with bulk wine now constituting 38% of the volume of wine exports worldwide, scientific coordinator of the International Organisation of Vine and Wine (OIV) Jean-Claude Ruf says. South Africa ranks sixth in terms of world bulk wine volume exports but last (11th) in terms of value, with prices below the world average of €0.71/litre (R12.22/litre).

Most of the South African producers at the show said price is one of the biggest challenges in the bulk wine game. “South African producers initially pitched wines at price points that were too low,” Roodezandt Wines’ marketing and sales manager Maynardt Marais says. “This has resulted in our wines being perceived as ‘cheap and cheerful’.”

Botha Wine Cellar viticulturist Callie Coetzee says that while competitive pricing is important in the bulk wine business, it’s equally important for producers to work together, adding, “It becomes a big challenge when a few producers cut their prices to close a deal.”

Boland Cellar cellar manager Paul Malan believes South African wines can achieve higher prices. “We use this exhibition to showcase our best rather than just our entrylevel wines,” he says. “Buyers don’t necessarily shy away from higher prices for these wines. While we can’t sell all our bulk wines at a premium, we can certainly achieve better prices.”

KWV wine buyer and viticulturist De Wet Hugo, says the low prices are an identity issue. “South Africa has great diversity but we lack specific identity. As a result, we don’t have a go-to brand or variety, like Argentinean Malbec or New Zealand Sauvignon Blanc,” he says.

With nearly 7 000 visitors descending on Amsterdam this year, the World Bulk Wine Exhibition has become an increasingly influential show. Most of the South African exhibitors had prime stand positions – they were located directly opposite the entrance – and most of them were positive about the turnout.

While they agree that meetings need to be arranged beforehand, a big draw card was the chance to meet new buyers from traditional markets such as the UK and Germany and an increasing number from China and Russia.

Despite a growing interest from the east, the UK remains South Africa’s biggest market for bulk wine. Natalia Posadas Dickson, head buyer for online retailer Perfect Cellar and former buyer for Cooperative Food, says that while price is increasingly important, the rapidly growing discounters Aldi and Lidl are moving towards premium products. “With the big four supermarkets also decreasing their range sizes, there’s a growing opportunity in the £8 – £9 (R180 – R204) price range,” she says.

Given the growing interest in premium wine, what can South Africa do to improve its image and price point? “It depends on each winery’s objective but producers need to seriously obsess over quality,” Natalia says.

The Bulk Wine Competition was introduced five years ago to promote the quality of wines represented at the World Bulk Wine Exhibition. South African white wines in particular stood out and the Arbelos Chenin Blanc 2014 – a collaboration between Botha Wine Cellar and Slanghoek Cellar – was one of last year’s gold medal winners.

“South Africa’s white wines, especially Chenin, are top quality but unfortunately many of them are still exported as ‘dry white’,” Callie says. “As a country, we’re not strong enough in the EU supermarkets – we don’t have a must-have category.”

Perdeberg Winery cellar master Albertus Louw believes we need to learn from others and focus on our quality and uniqueness. “The show is a great way to see what’s happening in the rest of the world – it’s important to get out there and see what the current trends are,” he says.

Looking elsewhere for inspiration is key to innovation and staying ahead of the pack. In addition to its standard range, Wellington Wines now also offers lower alcohol (about 10% volume) Chenin Blanc and Pinotage which were both well received at the show, while Namaqua Wines is looking at different cultivars altogether and planting indigenous varieties from Italy and Spain.

Producers’ focus on improving quality and refining their offering seems to have led to an improvement in the world wine market. Spanish Wine Market Observatory director Rafael del Ray says there has been an impressive recovery following the recent drop in consumption. This bodes well for future wine exports in terms of volume – and hopefully value too.