Many compounds linked to quality in wine originate from stresses experienced by grape berries. 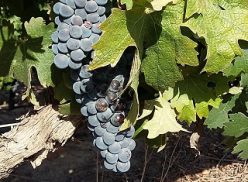 When confronted with a potential hazardous situation, most organisms capable of movement, including humans, animals and insects; can choose between a “fight-or-flight” response. Plants, however, are sessile and as such are literally stuck where they grow and, therefore, need to be more adaptable and acquire greater tolerance to multiple stresses that seldom occur in isolation in nature. This has necessitated plants to develop sophisticated responses to adapt and survive a range of stressful conditions (such as water or nutrient limitations, extreme weather conditions, or pathogen and pest attacks), as well as intensities of these stresses (mild to severe).

As active members of the workforce in uncertain times, we are well aware of the old adage that stress is bad for you. Stress in humans has been associated with everything from decreased productivity and psychological problems (depression to road rage) to medical conditions (e.g. blood pressure and heart disease) and ultimately death. But if mainstream media is to be believed, stress can also be good for us by increasing immunity, resilience and even brain functioning. Similarly in plant research, non-lethal doses of stress appear to have potential beneficial outcomes for crop plants.

A plant’s response to a stress is affected by a number of factors that include the developmental stage and the ambient environmental conditions. Due to the complexity of these responses, stress research in plants has historically attempted to study the response(s) to individual stresses in isolation. This can be facilitated in controlled laboratory or glasshouse conditions, where individual parameters, such as light, temperature, humidity, water or nutrition, can be tightly controlled and monitored. One variable can be perturbed, and the plant’s response is assessed over time, and evaluated relative to untreated control plants. These studies have demonstrated that plants use various ways to perceive and react to a stress stimulus, typically via plant hormones (comparable to the adrenaline response in humans). Yet unlike humans, plants can utilise specific hormones in response to specific stresses. For example: Abscisic acid (ABA) is used to modulate the response to drought stress; whereas the hormones salicylic acid and jasmonic acid are utilised during pathogen and herbivore attack. It has, however, become evident that how plants respond to multiple stresses (as occurs in field grown situations), cannot be predicted based on the plants response(s) to the individual stresses (in isolation).

Studies have shown that field grown plants exposed to multiple stresses perceive each individual stress via a specialised system, but often activate similar molecules to deal with the stress combinations. Numerous stress-related pathways are directly related to the biosynthesis of quality-associated wine compounds. These include compounds linked to the following attributes: Colour (e.g. anthocyanins, flavonols and carotenoids), flavour and aroma (e.g. monoterpenes, sesquiterpenes and norisoprenoids), mouthfeel (e.g. polyphenolics, such as tannins), antioxidants (e.g. terpenoids, such as carotenoids and polyphenolics, such as flavonoids) (Figure 1). Moreover, many of the routine viticultural canopy manipulations affect the bunch microclimate and therefore also influence the metabolism of these compounds. Each of these different compound classes represents an interesting, yet complex, stress response, but this review will only focus on the role of carotenoids (and the derived molecules) in grapevine stress responses and how this relates to grape composition and ultimately quality. 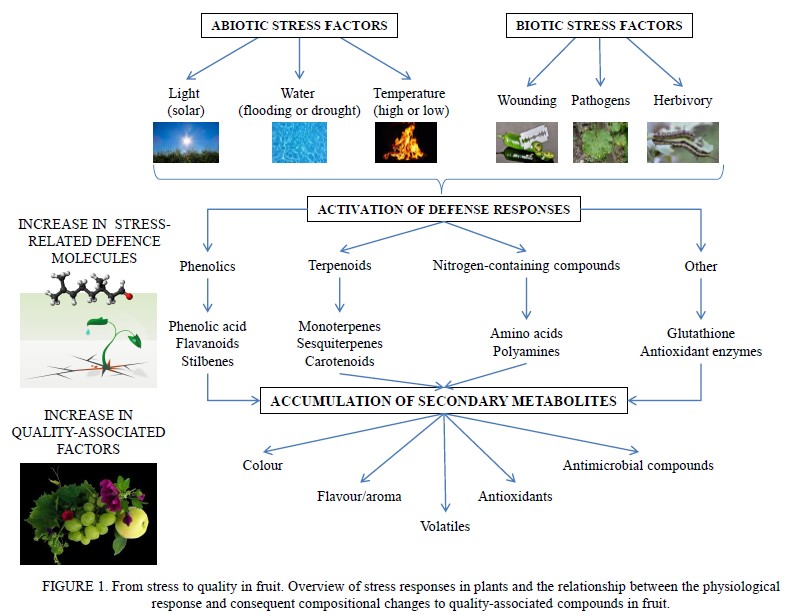 Carotenoids: From photoprotection of photosynthesis to flavour and aroma production

Carotenoids are C40-tetraterpenoids that play essential roles in photosynthesis. Due to their chemical structure carotenoids effectively increase the proportion of the light spectrum of sunlight that can be utilised by chlorophyll for photosynthesis. In addition, some carotenoids are essential to protect the plant tissues against the dangers of excess light, operating in photoprotective mechanisms in photosynthetically active organs. Carotenoids further serve as precursors to apocarotenoid compounds with diverse biological functions that include some of the plant hormones and volatile C13-norisoprenoids. From a grape and wine perspective, the volatile C13-norisoprenoids are considered impact odorants that contribute to the varietal floral and fruity attributes of many grape cultivars. These norsioprenoids are formed by degradation of carotenoid substrates and include important volatile flavour and aroma compounds, such as α-ionone (typical violet/berry aroma), β-ionone (typical violet/floral aroma), geranylacetone, pseudoionone, 1,6,6-trimethyl-1,2-dihydronaphtalene (TDN) (typical kerosene or marmalade aroma), vitispirane and and β-damascenone (typical rose or honey aroma) and contribute to the typicity (representative of the cultivar) of most wine cultivars, most notably Shiraz, Riesling, Chardonnay, as well as the cultivars used for the Madeira wines of Portugal.

The carotenoid metabolic pathway are relatively well conserved and the pathway is well established in plant research. Research at the Institute for Wine Biotechnology of the Department of Viticulture and Oenology at Stellenbosch University has made contributions to carotenoid research in grapevine in measuring the type and amounts of carotenoids in different grapevine tissues, including grapevine berries (condensed in Figure 2). Due to the involvement of carotenoids in photosynthesis, abiotic stress (via ABA) and flavour and aroma production (via the norisoprenoids); carotenoid research in grapevine provides numerous promising opportunities. 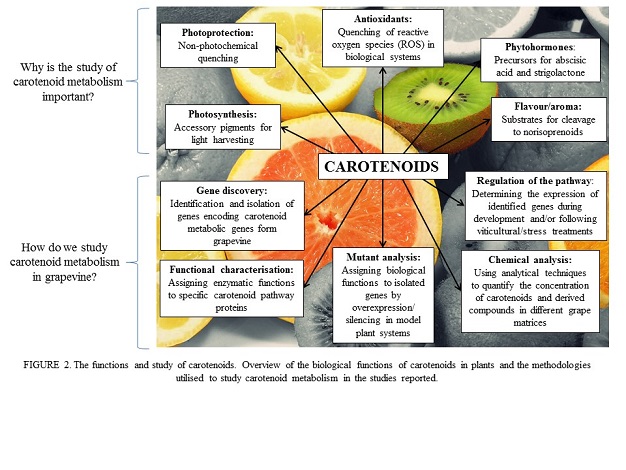 The genetics underlying the respective pathways for the biosynthesis and degradation of compounds of interest are ideally required to fully understand their regulation and ultimately the functions of the compounds in the plant. To this end the genes and enzymes of the carotenoid metabolic pathway of grapevine (Vitis vinifera cv. Pinotage) were identified, isolated and the functions of the products were studied. We confirmed that oxygenated carotenoids (xanthophylls) play an important role in protecting the photosynthetic apparatus from photodamage caused by light-induced oxidative stress. This response is observed in photosynthetically active tissues (e.g. leaves), including green berries. Apart from light, it has also been demonstrated that carotenoids provide cross-protection to other stress factors that result in reactive oxygen species (ROS) formation, e.g. drought, chilling, heat, senescence or salinity stress. This is due to the carotenoids directly functioning as antioxidants in biological systems.

The extraction and measuring of carotenoids is a prerequisite to study the impacts of the metabolic pathway. This is, however, particularly challenging due to the sensitivity of this class of compounds to numerous ubiquitous factors, including temperature, light, oxygen, pH and oxidising agents. An extraction and liquid chromatographic (HPLC) method was, therefore, optimised specifically for the analysis of photosynthetic pigments (carotenoids and chlorophylls) from grapevine samples (leaves, berries from various developmental stages and callus tissue). The method was optimised to reliably extract carotenoids and chlorophylls from minimal tissue (~250 mg) and the analytical procedure prevents the formation of degradation artefacts (e.g. pheophytin from chlorophyll) as is frequently reported in grapevine carotenoid research. The optimised method enables researchers to accurately identify and quantify changes in individual compounds during, for example, development (as grape berries ripen) or in response to a stress or viticultural treatment.

It has been shown in carotenoid accumulating fruits, such as tomatoes and peaches, that volatile norisoprenoids are derived from carotenoids. The C40 carotenoid substrate is broken down into volatile C13-noripsorenoid products via both enzymatic and non-enzymatic reactions. As their name suggests, the carotenoid cleavage dioxygenases (CCDs), are enzymes that cleave the carotenoid substrates to form these volatile norisoprenoids. The grapevine CCD enzymes were studied and it was possible to link the activities of some of the enzymes to the formation of specific volatiles. Cultivar differences in terms of these CCD enzymes could contribute to cultivar typicity with regard to aromas and needs to be studied further. An analytical method was also optimised to analyse the volatile flavour and aroma compounds from grape tissues.

A second group of carotenoid cleavage enzymes, the 9-cis epoxy carotenoid dioxygenases (NCEDs), are also of interest in grapevine research. The NCEDs have received much attention in plant crop sciences due to their role in the biosynthesis of ABA. ABA is a phytohormone that is required for a number of divergent physiological responses including seed germination, abiotic stress responses and development. In grape berry development, ABA is involved in the initiation and progression of ripening. During abiotic stress responses, e.g. water stressed plants; increased NCED activity has been linked to ABA accumulation. Our own research has shown that when a grapevine NCED was produced at high levels in the model plant Arabidopsis thaliana, it significantly increased the levels of ABA which improved the photosynthetic performance of the plants under high light conditions, as well as dramatically increasing the drought tolerance of the plants (relative to the control plants). 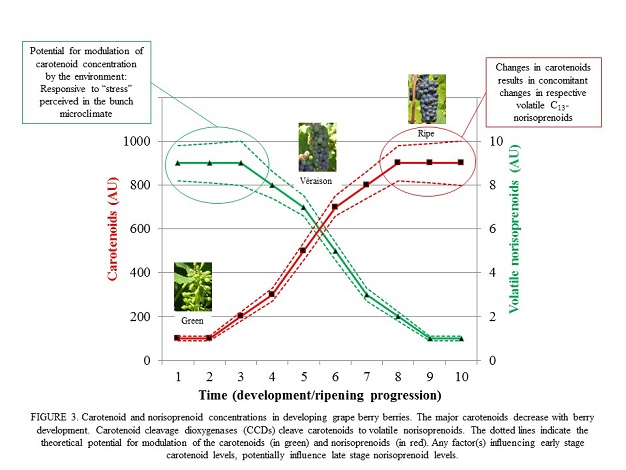 Collectively the research conducted has contributed to our understanding of the carotenoid metabolic pathway in grapevine; and how specific carotenoids are utilised in, for example, stress responses. The analytical methods developed for the analysis of the carotenoids, and the derived volatile norisoprenoids, has made it possible to follow how these classes of compounds are modulated during berry development, and following viticultural treatments and/or environmental stresses. This remains the focus of ongoing projects in Sauvignon blanc (Elgin) and Shiraz (Robertson) vineyards where it is now possible to evaluate the impacts of different stresses and/or viticultural manipulations on berry and wine quality impact molecules.

The inherent sensitivity of the carotenoids for degradation, and their specific cleavage by the cleavage enzymes, establishes an important link between the carotenoid content of grapes (in early developmental stages), and the final norisoprenoids content of grapes (at harvest). Early viticultural treatments that modulate the bunch zone microclimate (causing moderate stress, but not damage) can, therefore, have a profound impact on the final berry composition at harvest. The carotenoid metabolic pathway is central to a number of these stress responses since plants predominantly react to protect the photosynthetic apparatus of the plant. From a winemaking perspective the breakdown/degradation products of the carotenoids are impact odorants in many commercially relevant wine cultivars. Understanding and exploiting the links between the cultivar, environment and stress response molecules in grapevine, and known quality associated impact odorants, provides the plant’s physiological response underlying a number of elusive and esoteric concepts of importance in oenology, such as cultivar typicity and terroir expression.