Beware of too many shows – John van Breda 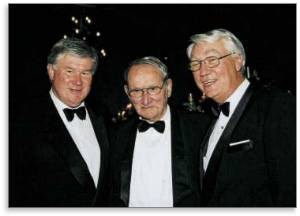 “The number of shows create a veritable confusion of Babel for local and overseas clients. The sooner the decision for the South African wine industry to market itself as a united front and establish a uniform basis for clear recognition of its wine, the better for everybody.”

So said John van Breda, retiring CEO of Agri-Expo (Cape of Good Hope Agricultural Society) and sponsor of the SA Young Wine Show, as guest speaker at the gala function.

Mr Van Breda, who is now retiring after more than 30 years’ service to agriculture with particular involvement in the organisation of shows, said he believed the industry needed its cultivar shows, its SA Young Wine Show and an SA national show, namely Veritas, and nothing else.

“Let’s face it, what we have here is an industry which is not an essential agricultural product. Since this is an undeniable fact, you should admit to yourselves that you are farming with a luxury item and therefore also accept that the consumer, public and government actually owe you nothing.

“Therefore participation in this specific young wine show will be increasingly important. The uniqueness of the show cannot be overemphasised. As far as could be established, it is the only show of its kind in the world. You as winemakers are therefore very fortunate to be offered such an opportunity. Its sustainability is in your hands and those of everybody present here tonight.

“The educational value of this show is still not being recognised. The truth of the matter is that the wine producer is offered a technical opportunity each year. We all know that many of the wines entered here are experimental and will never be bottled or labelled.

“Therein lies the importance of this opportunity, namely that the winemaker is given the opportunity to ‘play around’ with his wines, and shortly afterwards, he or she gets an opinion about this experimental ‘playing’ from the industry experts. Moreover, it presents a unique opportunity to make the necessary comparisons, backed up by discussions. Another fact to be recognised is that quite a few well-known wines were created in this way, while others were refined in the process.

“We accept that the SA Young Wine Show is not a glamorous occasion to advertise a product. Over the years the show has always been willing to let itself be guided and in this way to keep up with new ideas and developments in the industry, thus maintaining its claim as a technical aid and squarely fulfilling its unique role.

“If there have been any misconceptions about this being just another show, I hope that we can herewith put paid to that notion. Personally I feel there is a big blunder in the industry as far as shows are concerned and here I refer to the shows following on the heels of this young wine show. I am convinced that the industry is confusing the public and the market place.

“To me it is more than acceptable that the new cultivar groups should have their shows and obtain results, while at the same time providing and training the SANW judges. That is why Agri-Expo supports this new movement, but here too it is necessary to guard against excess.”

Comexposium (global event organiser) and Vinexpo Holdings (held by the Bordeaux-Gironde Chamber of Commerce and Industry – CCIBG) have... END_OF_DOCUMENT_TOKEN_TO_BE_REPLACED

Every year, the presentation of the prestigious 1659 medal of honour (erepenning) to a wine icon is a special... END_OF_DOCUMENT_TOKEN_TO_BE_REPLACED
Go Back
Shares