When a much-loved national whisky festival got underway again recently after a three-year pandemic-related absence, it was Boplaas that shared the stage to present a Masterclass with South African whisky icon Andy Watts.

Called The Only Whisky Show, the event was held at the Deck @ Wanderers on July 28 and 29. It is organized by Whiskybrother & Co. It proved so successful, with tickets selling out in a matter of hours, that a second event was scheduled for Cape Town.

Boplaas joined the event with other local whisky producers, including the James Sedgwick Distillery in Wellington, maker of Three Ships and Bain’s. Here, a masterclass was presented by Daniel Nel, 6th generation distiller at Boplaas, and Andy Watts, who in 2020 was named the US-based Icons of Whisky’s World Whisky Ambassador of the Year. 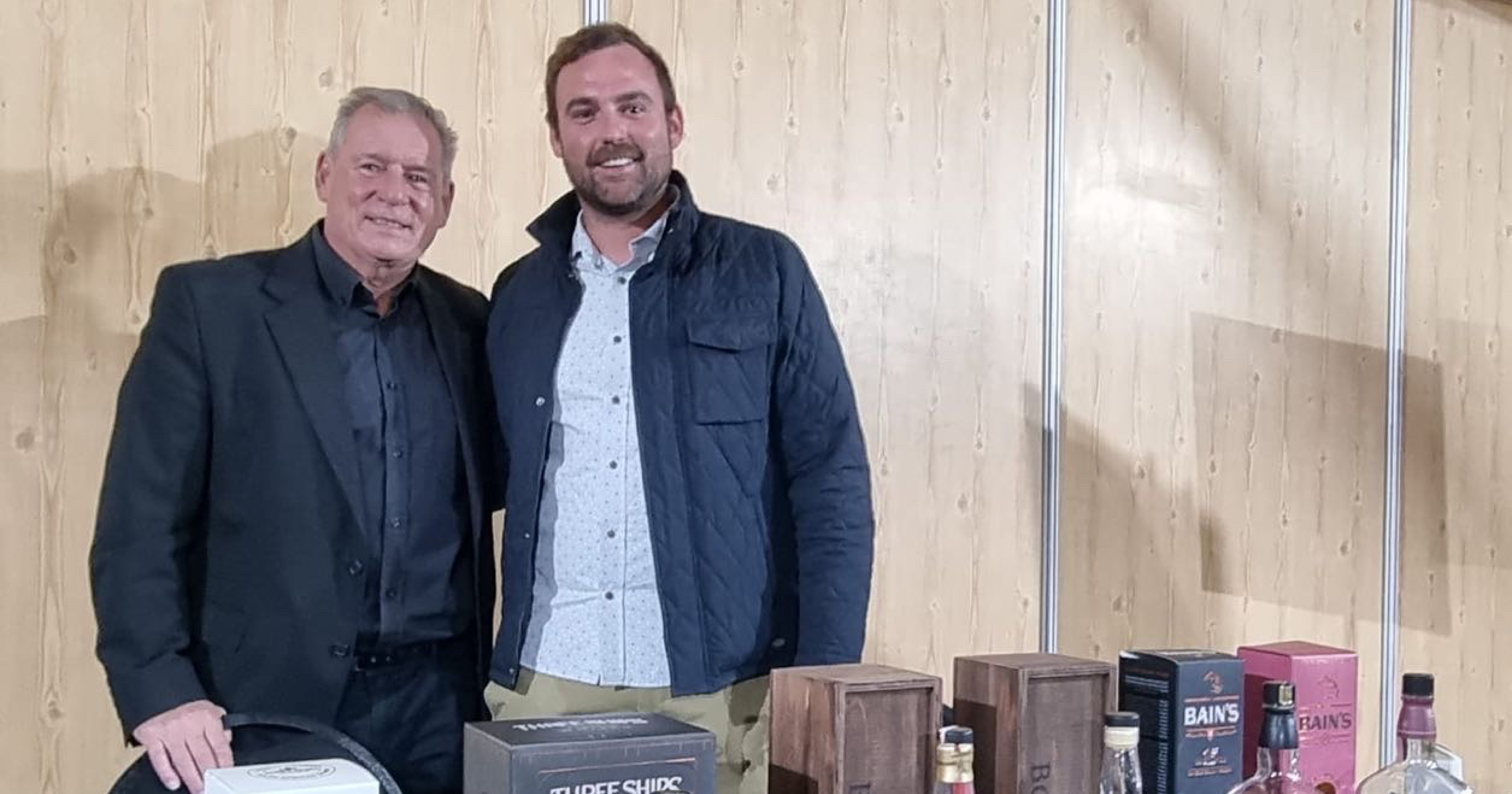 “It was an absolute privilege to share the stage with someone of Andy’s stature,” says Daniel. “Not only does he have a wealth of knowledge at his fingertips, but he started a whisky industry in SA that is now internationally recognized, while being very humble about it.”

Andy kicked off with the 6th release of Three Ships’ annual Master’s Collection, namely the 12YO Double Wood Blend. The whisky is bottled at 49.6%. Only 2 760 bottles were released. The whisky was aged in a combination of American oak and seasoned Amontillado casks. It’s a beautiful, blended whisky with almost equal parts of grain and malt, showing wonderful sweetness and nutty character from the sherry cask.

The second whisky from Three Ships was the Millennium 21YO, distilled in 2000. It was launched last year at 51.8% alcohol. Only 1202 bottles – a palindrome of the year of release – were produced. The liquid rested in ex-bourbon barrels for 10 years, then Oloroso casks, before finally being returned to aged ex-bourbon oak. It’s a outstanding expression with warm sweet spice, some savoury aromas and lingering nutmeg.

“It was truly a stroke of marketing genius and good fortune to produce Three Ships’ first ever 21YO on the eve of the millennium for release in the corresponding year,” says Daniel.

In turn, Daniel showed two single cask whiskies from Boplaas that were special releases this year – an 8YO with tawny cask-finish and an 8 YO with virgin cask-finish.

Daniel Nel took over Boplaas’s distillation division and expanded the portfolio of renowned brandies with a range of innovative whiskies. This included the 6YO Tawny Cask Whisky that won Platinum at the Michelangelo International Wine & Spirit Awards. Boplaas also continued to amass medals for its other whiskies, brandies and gin, alongside its well- established reputation as a family-owned winery in Calitzdorp.

Boplaas whiskies are all made from single grain – the finest South African yellow maize. These generally mature faster in the warm Klein Karoo climate, which brings smoothness and concentration to the whiskies well beyond their stated years.

The second Boplaas whisky at the Masterclass was the 8YO tawny cask single cask bottling, which is the older sibling of the much-awarded 6YO tawny cask whisky. The 8YO was first aged in old American oak bourbon barrels before being rested for a further three years in a cask that formerly held tawny port.

“The whisky is bottled at 56% alcohol and even though it’s much higher in ABV than the previous whiskies of the evening, it is luxuriously soft, smooth and packed with flavour,” says Daniel. “It has a lingering tawny finish as only the best cask was selected for this release.

“You would expect the tawny finish to make the whisky sweeter, but it actually makes it more wine-like, with beautiful notes of dried apricots, peaches and Christmas fruitcake.”

The two Bain’s whiskies for tasting were the 15YO Founders Collection and the 10YO Shiraz Cask. The 15YO was a special bottling for travel retail and released in 2019 at 52.5% alcohol. Only 3 600 bottles were produced. The whisky shows soft floral notes, spice and tropical fruits.

The second expression was launched in 2020. The whisky started life as Bain’s Cape Mountain Whisky but then spent an additional five years maturing in ex-Shiraz American oak casks. It was bottled at 63.5% alcohol. The whisky opens up nicely when you add a drop of water and shows layers of earthy red fruit and pepper together with vanilla, toffee and spice.

“This was a splendid event,” says Daniel. “Not only were participants tipped off to special releases such as the peated single malt from Boplaas and a port cask-finish from Three Ships, we all had a great time.”