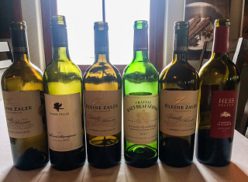 The stunning Cabernet Sauvignon flight that was tasted.

The annual Cabernet Sauvignon workshop, or as vice president of sales & marketing Anthony van Schalkwyk describes it, the annual Cabernet Sauvignon experience, sounded just like any other wine tasting I’ve been invited to in the past. But as it turns out, this one had a slightly different feel to it (the excellent cuisine, view and company notwithstanding, of course). Well, at least for me. But more about this later.

In a time where the world increasingly looks towards South Africa for quality wine, Kleine Zalze is putting its hand up and firmly grasping all the accolades coming its way. For example, Kleine Zalze’s score of 91 for its Family Reserve 2013 at the recent Cabernet Sauvignon Report (for more info see http://ow.ly/GX3030cAjYv) shows that they’re right up there with the top dogs.

But what makes a good Cabernet Sauvignon and how do you keep making good Cabernet? When winemaker Alistair Rimmer was queried about one of the wines in the line-up, the Kleine Zalze Family Reserve 2009, his revelation that this single vineyard (the ‘origin’ of this wine) was completely pulled out earlier in 2017 was met with gasps of shock, horror and utter dismay. Somebody even loudly asked, “Why did you do that?”

Alistair explained that while the vineyard in question gave exceptional grapes for quite some time, a decline in quality eventually sealed its fate. This sad demise was, of course, suffered at the hands of the dreaded leafroll virus. Says Alistair, “We started an ambitious project here at Kleine Zalze which had quality planting material at the forefront. But what about infected vines? While one might get emotional about pulling out older, infected vines and even whole vineyards we need to focus. This means that we have to think about what we did well, but also what we will be doing well over the next 20 to 40 years. Going forward we will be investing even more heavily in not only the soil, but also our Cabernet Sauvignon vines and their longevity.”

On to the wines in question. What made this tasting different, but refreshing (albeit for me) was that the wines were paired with each other. Three Kleine Zalze wines (wine one, three and five) were paired with three international wines (wine two, four and six). This was a great way to not only explore different Cabernet Sauvignon styles, but also see how our local Cabs stack up against their rivals abroad.

For the sake of brevity I will briefly expand upon my favourite wine of the flight – the  Kleine Zalze Reserve 2009. This single vineyard Cabernet Sauvignon was, simply put, sublime. The brick red edges caressing my glass was a gentle indication of the wine’s age. Upfront pencil shavings on the nose was accompanied by wafts of dark fruit, particularly plum. On the palate it blew away its Australian counterpart with more fruit complexity and a long tannin finish. I honestly could not fault this wine, which will undoubtedly age excellently for at least another decade.

Sales manager Barry Kok summed it up very well when I asked him how we can keep excelling with Cabernet Sauvignon on the global stage. “You see wines with aspects that you admire, not meaning that you want to copy it. This being said, there is always room for improvement. Stylistically and regionally we need to position ourselves in a certain sphere. It’s not about being better than ‘them’ – we have different regions.”

When I prompted Barry about the ‘good value for money’ phenomenon that plagues our wine’s reputation, he said, “South Africa is no more the cheap go-to brand globally. The only way to continue the trend of getting out of that rut is by working together.”

And this, I believe, is something us South Africans can do very well.