Wineries produce large volumes of poor quality wastewater, and approximately 3 to 5 m3 is produced per tonne of grapes crushed (Mosse et al., 2011). Scarce irrigation water could be restricted further in future irrigation water allocations (Petrie et al., 2004). Where wineries are surrounded by vineyards, irrigation with diluted winery wastewater could be used instead of water from natural resources. Currently, the Department of Water and Sanitation is drafting new General Authorisations for wineries. The objective of this study was to determine the effect of using diluted winery wastewater for vineyard irrigation on growth, yield, juice and wine quality in order to make recommendations for the refinement of the General Authorisations.

The field experiment was carried out with micro-sprinkler irrigated Cabernet Sauvignon/99 R near Rawsonville in the Breede River Valley region from the 2009/10 to 2012/13 seasons. In 2009/10, treatments were only applied after harvest due to late infrastructure completion. Nine treatments were applied as indicated in Table 1. Irrigation with winery wastewater diluted to 100, 250, 500, 1 000, 1 500, 2 000, 2 500 and 3 000 mg/ℓ chemical oxygen demand (COD), was compared to irrigation with river water. Treatments were replicated three times in a randomised block design. In addition to the normal winter oats cover crop, an interception crop of pearl millet was cultivated in summer. Details of the irrigation infrastructure, dilution procedures and water quality was reported previously (Myburgh & Howell, 2014).

Since midday stem water potential ranged between -0.57 MPa and -0.65 MPa, grapevines experienced no to low water constraints (Myburgh et al., 2016). Furthermore, irrigation using diluted winery wastewater, regardless of the level of dilution, clearly had no effect on the grapevine water status compared to where grapevines were irrigated using river water (Table 1). Given the low levels of water constraints, poor wine quality would be expected (Myburgh et al., 2016).

Irrigation using diluted winery wastewater did not affect vegetative growth compared to river water (Table 1). This was to be expected, since irrigation using diluted winery wastewater did not affect grapevine water status, as well as leaf and shoot chemical status (Myburgh & Howell, 2014). Furthermore, the N load in the wastewater was inadequate to supply the grapevine’s N requirement. It must be noted that winery wastewater diluted up to 3 000 mg/ℓ COD did not pose any salinity hazard to grapevine growth. Cane mass was comparable to values reported for Cabernet Sauvignon in the Breede River Valley (Roux, 2005) and the Lower Olifants River Valley (Bruwer, 2010), but was substantially higher than non-irrigated grapevines in the Swartland region (Mehmel, 2010). Based on the foregoing, the interception crop did not seem to have negative effects on grapevine vegetative growth.

Irrigation using diluted winery wastewater did not affect grapevine fertility, i.e. number of bunches per grapevine (data not shown). In the 2010/11 and 2011/12 seasons, treatments had no effect on berry size development (Schoeman, 2012), and was probably due to a lack of differences in grapevine water status. Irrigation using diluted winery wastewater had no effect on berry mass, bunch mass or yield compared to the river water (Table 1). Grape yield was comparable to approximately 15 t/ha reported for irrigated Cabernet Sauvignon (Roux, 2005), but substantially higher than non-irrigated ones (Mehmel, 2010). The relatively high yield confirmed that grapevines experienced low levels of water constraints (Myburgh et al., 2016).

In 2010/11 and 2011/12, sugar loading into the berries and acid breakdown during ripening were not affected by irrigation using diluted winery wastewater compared to the river water (Schoeman, 2012). The fact that the rate of berry ripening was comparable to the river water control indicated that the winery wastewater had no effect on the physiological functioning of the grapevines, irrespective of the level of dilution. Consequently, there were no differences in juice sugar and acidity at harvest (Table 1). However, juice pH increased with an increase in COD level of the irrigation water. This could have negative consequences on fermentation and microbial stability and colour of wine. More details regarding this aspect will be given in a subsequent article.

Analysis confirmed that no wines contained pathogenic bacteria and were safe for sensorial evaluation (data not shown). Wine colour (Fig. 1A), as well as vegetative and berry character (Fig. 1B & C) were not affected by the use of diluted winery wastewater for irrigation. There were no differences in wastewater associated off-flavours and tastes compared to the river water control (Fig. 1D & E), thereby confirming that no contaminants were transferred from the wastewater into the wines. However, in a parallel study where bunches were deliberately sprayed with diluted winery wastewater, a winery wastewater-like odour was detected in the wines, and their spicy character reduced (Schoeman, 2012). This highlights the importance of avoiding contact between grapes and winery wastewater. There were no differences in the overall quality of the wines (Fig. 1F). The low quality, i.e. less than 40%, can be ascribed to the low water constraints as discussed above. 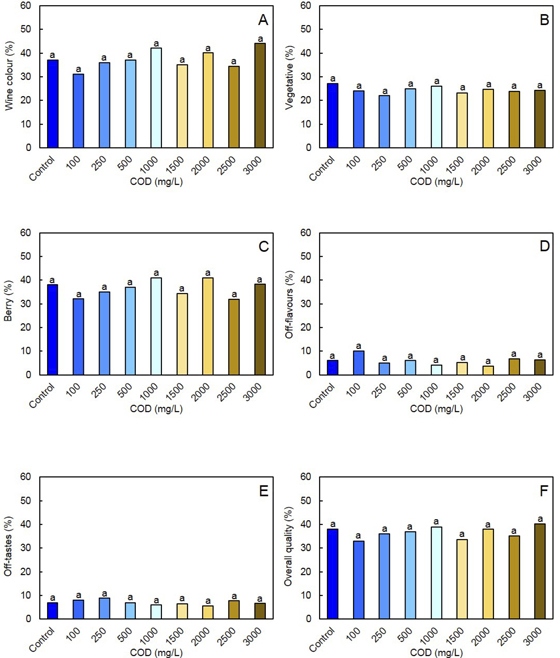 Based on the project results, the following criteria should be considered for possible amendments to the General Authorisations for wineries when using diluted wastewater for irrigation of vineyards:

The effect of irrigation using winery wastewater diluted to eight different levels of chemical oxygen demand (COD) with river water on grapevine responses were compared to irrigation using river water in a temperate climate with hot, dry summers. The field trial was carried out with Cabernet Sauvignon/99 R near Rawsonville in the Breede River Valley region from the 2009/10 to 2012/13 seasons. Under the prevailing conditions, i.e. Mediterranean climate and sandy soil, plant water status did not respond to irrigation with diluted winery wastewater, irrespective of the level of dilution. Irrigation using diluted winery wastewater did not affect vegetative growth, yield or juice characteristics, except that of juice pH or wine sensorial characteristics. The latter practice did not induce off-flavours or tastes in the wines. In heavier soils or in regions with lower winter rainfall, situations where the winery wastewater contains more K or where no pearl millet interception crop is cultivated during summer, grapevine responses may be more pronounced.

The project was initiated and funded by the Water Research Commission. The project was co-funded by Winetech, THRIP TP 1208066038 and the Agricultural Research Council. Goudini Winery for permission to work at their winery, and in their vineyard, as well as the grapes used for samples and winemaking. Willie and Daniël Botha for managing the vineyard and general assistance. Staff of the Soil and Water Science Programme at ARC Infruitec-Nietvoorbij for technical support.

Any opinions, findings and conclusions or recommendations expressed in any publication generated through THRIP-supported research, are those of the author(s) and therefore the NRF/THRIP will not accept any liability in that regard.