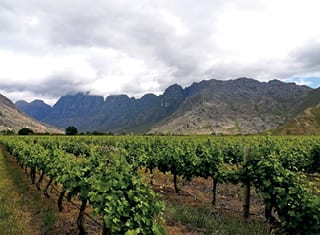 Measurements of carbon isotope discrimination (CID) can be used to study the accumulative effects of strenuous environmental conditions on photosynthesis and gas exchange in the grapevine.

Grapevine reaction to these environmental conditions is determined by observing the amount of 13C (“carbon thirteen”) absorbed by plant material after discrimination of 13C against 12C has taken place internally (Bodin & Morlat, 2006). Stomatal closure will for instance lead to lower stomatal conductance and photosynthesis, therefore less leaf internal CO2. This leads to less CO2 supply to the Rubisco enzyme (Lal et al., 1996) and more 13C absorption as opposed to 12C.

There are many techniques available in research to assess grapevine water status, but many of the methods are difficult to perform in a practical vineyard estate setup, due to equipment, time and labour constraints. The advantage of this specific method is that it may be used to assess the severity of accumulated grapevine water deficit, which in turn could be useful in irrigation management especially when complemented by soil water content continuous logging.

Trials were conducted both in Stellenbosch and close to Wellington on Merlot vineyards, where several treatments were assessed using plant water status measurements and other viticultural parameters. In Stellenbosch, plots were classified according to plant water status into “wet” and “dry” treatment classes, which were shown to have consistent differences in the CID values in the latter part of the season (Figure 1). 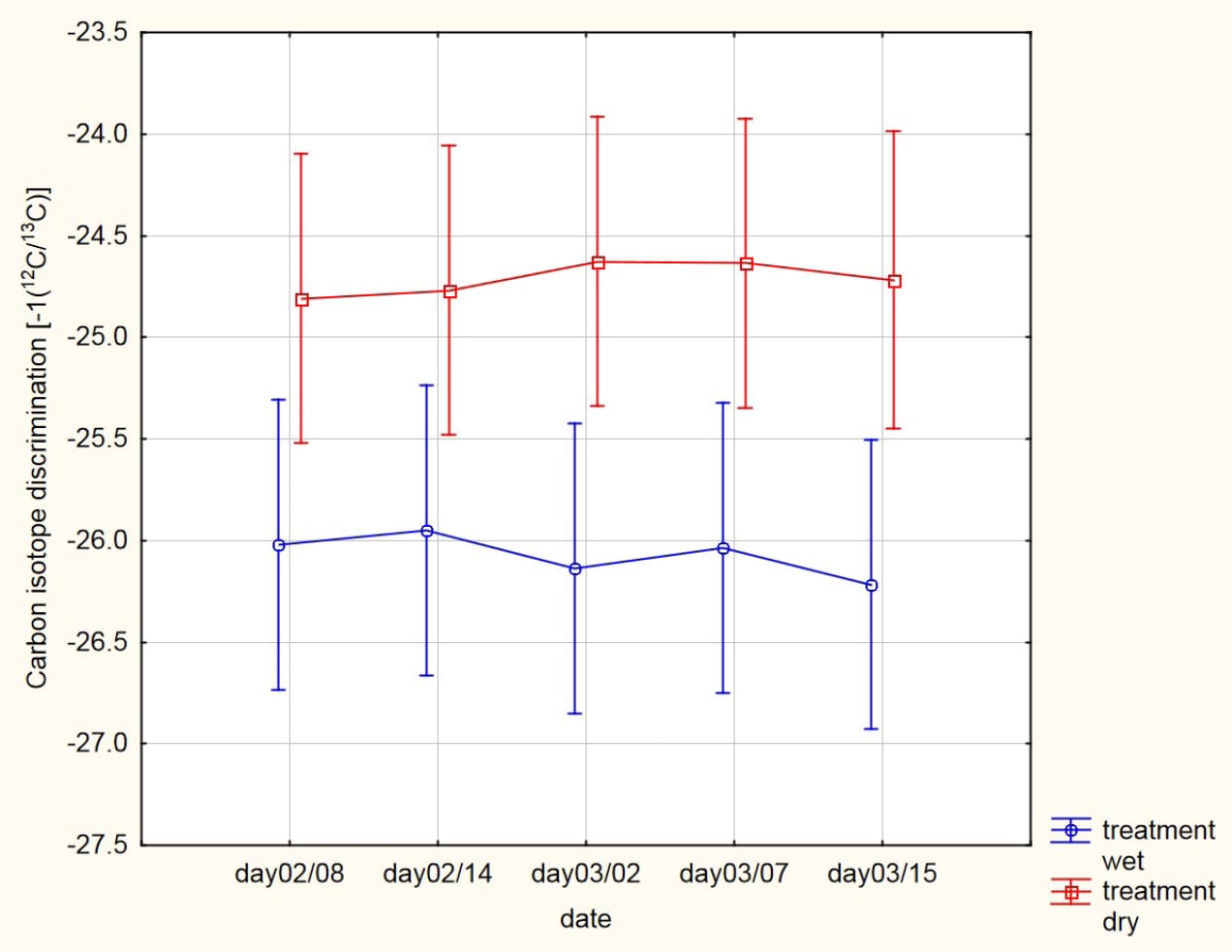 Although we found significant differences in CID values between the “wet” and “dry” treatments in both seasons (2007/08 and 2008/09) studied in Stellenbosch, the ranges of the values differed between seasons. The measurements ranged from -24 to -26.8, indicating moderate water deficits for the 2007/08 season and -25.2 to -26.4, indicating weak to absent water deficits for the 2008/09 season. The 2008/09 season had significantly more rainfall during the season and was cooler than the 2007/08 season, also confirming the usefulness of this measurements also in seasonal comparisons.

In the Wellington trial, plant water status was affected by modified irrigation regimes/practices (refer to Table 1 for more details on the treatments), showing higher water deficit levels for treatments that received less or no irrigation, as expected.

The differences in plant water status led to differences in berry mass and yield, as well as wine attributes, with inverse relationships found between the CID interactions and water status interactions (Figure 2). The figures reveal how high CID values and less negative stem water potential values (both corresponding with less stressed conditions) led to larger berries, more growth and in this case, lower wine scores. 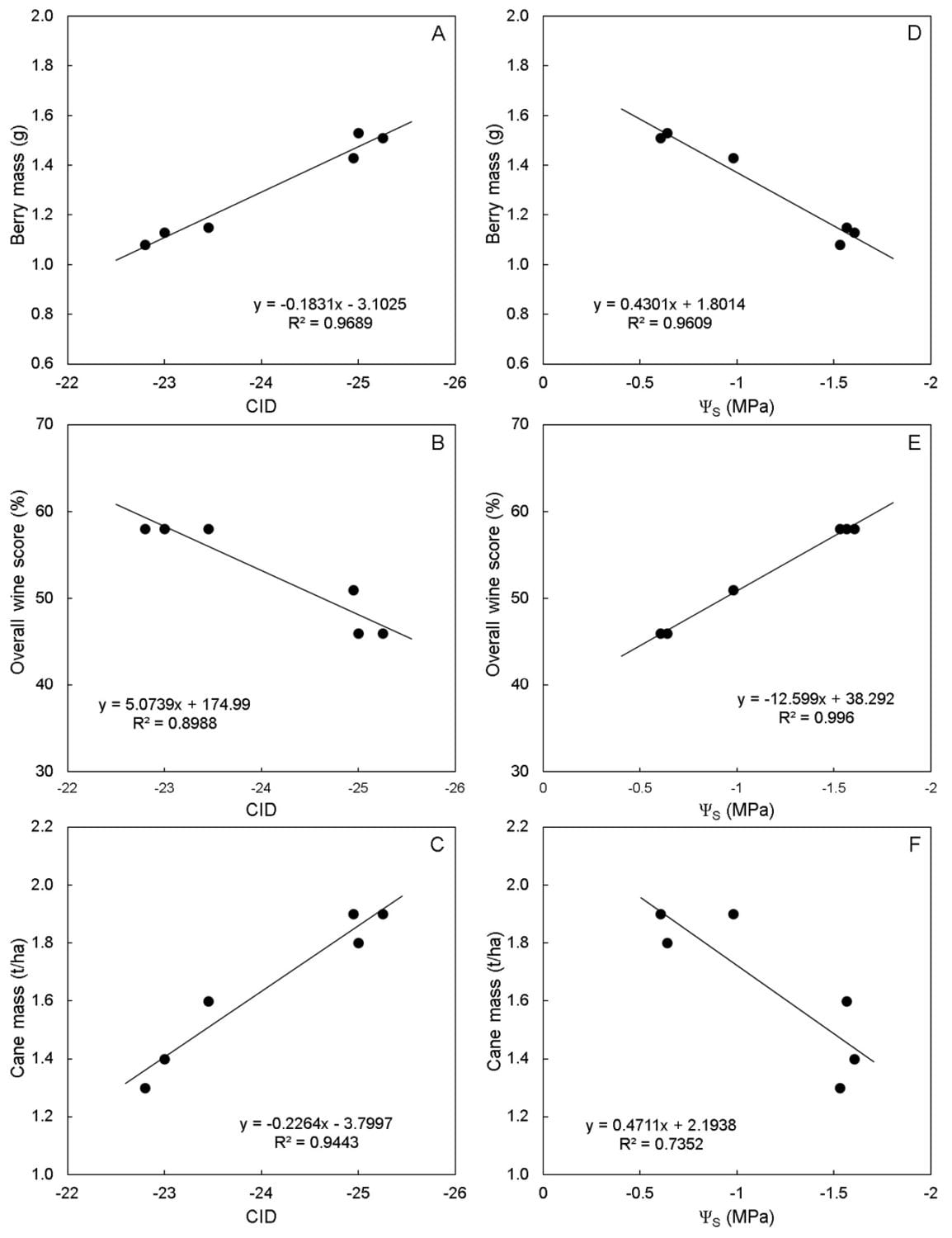 FIGURE 2. Relationship between berry mass, overall wine score and cane mass of Merlot/99R close to Wellington and (A, B and C) carbon isotope discrimination (CID), as well as (D, E and F) stem water potential (ΨS).

It seemed that at véraison (data not shown here) there were no significant differences in carbon discrimination between treatments. There should be little to no water deficit stress present at that stage, but for some reason all treatments had less negative CID values. Rossouw (2010) linked this to the inability of the technique to discriminate between sugars and acids as carbon source in this period of ripening, which is very important to take into consideration when conducting these measurements on unripe grape samples.

While for some of the treatments in-season differences were not always as clear as indicated in Figure 1, the accumulative nature of the CID measurements still led to clear value differences between different irrigation strategies at the end of the season. Therefore, these measurements are useful especially to check small differences between vineyards at an advanced ripeness level which could help with crucial late-ripening cultivar irrigation decisions.

This study showed how CID measurements may contribute to the difficult task of managing irrigation in an environment with differing grapevine water deficits. Furthermore, it adds a method to the plant water status monitoring toolbox, which is important, as only monitoring the soil and environment response with regards to water status does not integrate the important factor of grapevine regulation ability. Disadvantages of the method include high costs, depending on which laboratories are used, as well as delays when waiting for CID results from the labs, and the issue of early measurements being affected by the high juice organic acid content.

Carbon isotope discrimination analysis of grape juice can be used to provide an accumulative measurement of stress conditions that affect photosynthesis in the grapevine, such as water deficit strain/stress.

This technique was evaluated to monitor grapevine water status differences induced by different irrigation strategies in two separate Merlot studies conducted in Stellenbosch, as well as near Wellington.

Early (pre-véraison) carbon isotope discrimination measurements are, however, sensitive to high juice organic acid content, which reduce its sensitivity to plant water status drastically. It is, however, possible to evaluate in future studies whether this can be negated by removing organic acids from the juice.

The measurements proved to be an integrative, but sensitive indicator of grapevine water status, especially at the end of the season.