Caring for the ancients 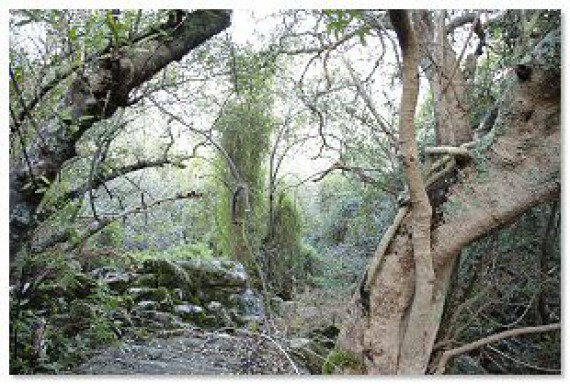 Conserving rare fynbos is not just about harnessing another marketing tool to the wagon of economic advancement. Neither is it about some New Age feel-good experience. It’s about a wider social conscience. LEONIE JOUBERT spoke to one of the pioneering wine families about why they are thinking about more than just vineyards and vintages at Delheim.

Wine farmers who over the centuries have been partly responsible for ploughing up so many thousands of hectares of this rare vegetation are now clambering to be aligned with its conservation.

The descendants of an ancient wood have been found hunkered down in a ravine on the side of the Klapmutskop, near the Simonsberg range outside Stellenbosch. Local nature conservationists were so enthused by the finding, in fact, that botanists from Kew’s Royal Botanical Gardens visited the site in the spring of 2005. Their intention was to collect and store some of the trees’ seed as part of the Millennium Seed Bank Project which aims to conserve seed-bearing plants from around the world by storing seed in case the species struggles in its natural environment. These trees might be sufficiently genetically unique to warrant just this kind of safekeeping.

The wood’s presence was first noted after massive fires roared through the region on the crest of a dry south-easterly wind, damaging crops, threatening homesteads and prowling dangerously close to cellars shortly before the 2000 harvest. But as the cinders cooled and winemakers took stock of their scorched and smoke-tainted harvest, this little patch of trees was found to have been protected from the fire by the rocks of the ravine, sparing them from the flames which leapt through the alien pine and wattle trees nearby.

The grand discovery – A copse of Breede River Yellow-wood, including many individual trees which are well over 300 years old, which may have been separated from other similar stands of this rare and endemic tree for long enough that they might be genetically unique from other similar yellow-woods in the region. Several farms’ boundaries come together on the Klapmutskop, including Delheim’s Delvera property. Victor Sperling, general manager and viticulturist at Delheim, says that the discovery spurred the various property owners to begin clearing away the alien plants that had invaded so much of the Klapmutskop.

Since then, the group has entered into partnership with CapeNature (the Western Cape’s nature conservation body) by establishing the 54-hectare Klapmutskop Conservancy. Not only are these trees now given greater protection, but the entire area – most of which is fynbos – is being kept free of alien plants at considerable cost while the natural vegetation is allowed to recover.

These yellow-woods are descended from a long line of trees, whose story goes far back to the time after the fall of dinosaurs but long before the reign of people. It was long after Africa had wrenched from the bosom of other continents with which it had once floated as one atop the earth’s mantle. Antarctica had slipped down over the southern pole but was forested over and warm. India was on a collision course with Asia which would soon lift the massive Himalayan mountains up almost nine kilometres into the air. As for the Western Cape – it was about 5 degrees of latitude further south than it is today.

Some 60 million years ago, earth was a warmer, ice-free planet: high sea levels had inundated much of the lower lying parts of the Cape (pushing bays some 30 km further inland in places than they are today), subtropical forests covered the region and the brutal Cape Doctor had not yet been conceived. Over the many millions of years which followed Antarctica, which for the longest time had been hand-in-hand with South America, finally loosened its grip on the sister continent and the two parted ways. The south began to freeze over, the massive Antarctic Circumpolar Current began to spin around the frigid continent for the first time, sending off twirling icy water masses which delivered a new kind of chill to places further north.

The Cape began to dry and the weather patterns shifted. Fynbos – the hardy, drought and fire resistant vegetation so typical of the region today – moved into the Cape and many of the subtropical trees retreated north and east in the face of this new and inhospitable climate, leaving behind a few ancestors of the trees which today only occur in remnant patches in river gorges and valleys in the Cape Floral Kingdom. The Klapmutskop yellow-woods are just such trees and Delheim’s contribution to their conservation is in recognition of this unique and ancient heritage. It is also part of a broader spirit of environmental consciousness which will see this Stellenbosch cellar soon be awarded the status of Biodiversity in Wine Initiative (BWI) champion in South Africa.

The Biodiversity in Wine Initiative – as reported in WineLand earlier – was launched as a way to promote conservation-related best practice within the wine industry. The initiative started as a partnership between the Botanical Society of South Africa and the SA Wine & Brandy Company in 2004, which later grew into the BWI. The BWI currently has one champion (granted to a cellar with the highest best practice and conservation standards) and 19 members. Delheim is one of the longest-standing members because of its conservation mindedness. Now the Sperling family – who’s father, Spatz, founded the Stellenbosch Wine Route – is gearing up to become a BWI champion. As a BWI member, Delheim is registered with the Integrated Production of Wine (IPW), has land set aside for conservation and has adopted environmentally sound vineyard and cellar practices.

To become a champion, Delheim must up its game further. It must have a Conservation Management Plan with measurable goals, undergo and “pass” an external IPW audit (which sets, amongst other things, stringent waste and water management guidelines) and have all the required industry permits and authorisations in place. Victor Sperling says the lengthy process of getting the waste water management system in line with the IPW’s requirements is the final step towards becoming a BWI champion – a status which is expected to be awarded in due course.

It is a curious trend sweeping the industry – where wine farmers who over the centuries have been partly responsible for ploughing up so many thousands of hectares of this rare vegetationare now clambering to be aligned with its conservation. But it seems the cost of being part of the movement probably amounts to more than the marketing benefits which being ‘green’ might bring. It seems that this push towards conservation might be part of a new consciousness, a new generation of thinking, a new kind of pioneering. It may not be just about money, after all.

Delheim now hosts the Delvera Vineyard Trail from the Klapmutskop farm, a 10 km hike through the conservatory and the yellow-wood forest. The farm also has the Café Delvera, a cheesery, nursery, wine tasting, mountain-biking, picnicking, an agri-tourism centre and accommodation. Further information and bookings for the Delvera Vineyard Trail can be made at (021) 884-4752.

The South African wine industry had to bid an iconic figure in the industry, and one of the founding... END_OF_DOCUMENT_TOKEN_TO_BE_REPLACED

Over the past few years the Cape Blend wine category has become a sought-after and dynamic wine style. Winemakers... END_OF_DOCUMENT_TOKEN_TO_BE_REPLACED