Catch the winds of change 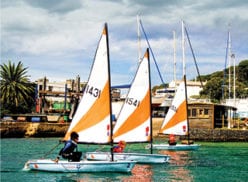 With consumer tastes as unpredictable as the seas around the Cape of Storms, the wine industry must know how to read the weather and ride out the changing tide. Johannes Richter looks at emerging global wine trends.

The power of perception

Powerful brands typically have one thing in common, Richard Halstead of Wine Intelligence says. Even more important than big-volume sales is the fact that they’re widely and instantly recognisable. “To get more people to buy your brand, grow your awareness,” he advises.

To appreciate the power of big brands such as Yellow Tail from Australia and Casilliero del Diablo from Chile, you only need to look at their disproportionate international reach. Although Australia produces only five percent of the world’s wine, Australian wine brands represent 20% of the top 15 global brands, according to Wine Intelligence’s Vinitrac survey which measures consumer attitudes in 36 countries around the world. Similarly, Chile produces only four percent of the world’s wine but is home to no less than four of the most powerful wine brands. In other words, scale is not a necessary ingredient for global success. That’s good news for a small player like South Africa, but how do you leverage this strength?

People in the wine industry may find inspiration in the wise words of ancient Greek mathematician Archimedes. “Give me a lever long enough and a fulcrum on which to place it, and I shall move the world,” he said. Richard emphasises the role of disruptors who have a powerful influence on the behaviour of large groups. As with strong global brands, certain groups can exert influence disproportional to their size, especially in a digital age where trends travel fast.

Some “stubborn minorities” have certain preferences they won’t compromise on, which consequently shape the habits of larger, more diverse groups, Richard says. A larger group is often willing to change direction to accommodate one person’s strong preferences – a trait he calls “flexitarianism”. And if enough people are willing to try something once, the idea can gain critical mass.

Richard cites the example of vegetarians and vegans who created a market for meat substitutes, which flexitarians now dominate with 80% of its sales. This way, stubborn minorities become a fulcrum for disruptions that set the stage for future generations. In wine, the hot-button issues are often abbreviated as sola: sustainable, organic and low alcohol.

So much for the influencers, but what do we know about those being influenced?

According to the latest Vinitrac research, people in Old World wine countries are drinking wine less frequently while wine consumption in New World countries has increased over the past 10 years. Alcohol-savvy consumers tend to aim for quality over quantity.

Men and women exhibit equal interest in the wine world, with regular male and female drinkers more on a par than a decade ago. This may be due to the fact there’s a wider selection of varietals on offer than ever before, so there’s something for everyone. The days of big varietals hogging the limelight (and certain consumer segments) may be numbered as winemakers and consumers diversify to experiment with lesser-known grapes and styles.

The same goes for distribution channels that have diversified. Online shops and discount stores selling wine are proliferating in countries where they are permitted to operate, giving producers more opportunities to catch the trade winds. The next challenge is to create frictionless experiences that reduce the time and effort required of buyers.

Here’s a fact to make rosé’s detractors blush: In America, 56% of rosé is regularly enjoyed by men. The category has grown dramatically in the past decade, almost doubling in Germany from 2007 to 2017, while increasing by 18% in the UK and eight percent in America over the same period. Its popularity is partly due to it being considered a fashionable but affordable premium wine by millennials: it’s relaxed, enjoyable and photogenic enough to post on social media. Forbes reports 25% of all imported rosé in America is drunk in New York City, with Miami coming in second at 15%.

Sparkling wine remains popular, particularly Prosecco, the highly accessible sparkling wine made from Slovenian grapes and originating from the Italian village of the same name. Prosecco has filled the gap behind Champagne rather than competing with it directly as a generic alternative, IWSR wine analyst Ania Zymelka says. It ticks the important boxes of quality and celebration and is perfect for today’s more austere yet aspirational market.

Prosecco is a volume-driven trend in a traditionally high-value category, potentially making it an interesting case to follow for South African wines competing for similar markets. South Africa’s sparkling wine exports worldwide grew by more than eight percent in both volume and value in 2017 compared with 2016, proving there’s a thirst for it.

It’s not only wine that ages with time. According to Wine Intelligence, the global distribution of wine drinkers is also advancing in years. Since 2007, regular German and Australian wine drinkers have become older as a category, and in America more than 40% of wine drinkers are now over 55.

These consumers are more discerning and although they drink less often, they tend to spend more when they do. Accordingly, cheaper wines are seeing lower sales, while wine sales at higher price points are picking up.

According to Richard, most sales of big brands are driven by occasional buyers (perhaps on account of those stubborn minorities) rather than staunch regulars. “It’s easier to get new people to buy your brand than to build loyal customers,” he says. In response, growth tends to take the form of acquisitions and joint ventures, as South Africans have witnessed this year. It’s about setting your sails to catch the winds of change.

Certain groups can exert influence disproportional to their size, especially in a digital age where trends travel fast.