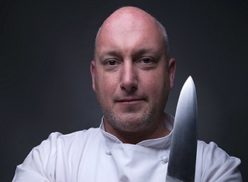 We assume that you can handle several good things at once, which is why we also invited George Jardine from Jordan and Jardine fame to braai the night away at the annual Hemel-and-Aarde Pinot Noir Celebration on the 26th and 27th of January 2018. Born in Edinburg, Scotland into a family of chefs, George’s fate and career was pretty much predestined by the food gods when he was still a bun in the oven. His grandmother was a pastry chef at Hollywood Palace and throughout the generations various family members chose to hone their skills in kitchens across Scotland. After completing his studies, George worked in various establishments in Scotland before moving to London to work under Michelin Star chef, Jean Christophe Novelli at first The Four Seasons Hotel, and later the formidable Maison Novelli Restaurant.

In 1997 George moved to Cape Town to open Novelli at The Cellars Hohenort Hotel in Constantia. The restaurant was named one of Conde Nast’s Top 50 Dining Destinations in the World during his first year there and carried on garnering many local awards and accolades. Here he also met his beautiful wife Louise le Riche and forged many good relationships with suppliers and winemakers – many of whom are still supplying George and his team at both Jordan and Jardine restaurants. An offer to become Chef de Cuisine of The Siriwijaya Restaurant in the prestigious Dharmawangsa Hotel in Indonesia, lead the couple to Jakarta, Indonesia. The restaurant was named Asia’s Hottest New Restaurant in 2001 by East Asia Magazine. From there, the journey continued to Kuala Lumpur, Malaysia where George opened the Adam Tihany-designed Lafite Restaurant for the newly renovated, flagship Shangri-La Kuala Lumpur Hotel. Lafite was a massive success and won many industry awards, as expected. After four years in Malaysia, George was invited to open Altitude restaurant at Shangri-La’s newest hotel in Sydney, Australia – it was named Altitude Restaurant Australia’s “Restaurant of the Year” by The Australian Hospitality Association in 2005.

In 2006, George and Louise returned to South Africa with William and Louis (now seven and five), who were both born in Malaysia, to open restaurant Jardine in Cape Town’s CBD. George was Eat Out’s Chef of the Year in both 2006 and 2007 and featured in the guide’s top 10 restaurants for four consecutive years. Restaurant Jardine was also voted on San Pellegrino’s Top 100 restaurants in 2008 and 2009.  Jardine Bakery, situated next door to the restaurant, opened in August 2007. Fondly called “The hole in the wall”, the bakery has a loyal following of office workers from surrounding office blocks and foodies who pick up hand-rolled croissants, rye bread and artisan pastries.

Having established both restaurant and bakery and spending four years building up a highly skilled staff complement to uphold the restaurant’s standards of consistency, George expanded into the winelands to open Jordan Restaurant which consistently features on the Eat Out Guide Top Ten.  In 2016 George and Louise opened Jardine restaurant in Stellenbosch. It is a small, intimate space punting local produce and wines. We managed to drag George and Louise away for the night and the entire evening – including his showmanship – will make for a fun night out.

Please note that we still have a few full-weekend tickets available and due to the popularity of the Saturday evening event we have also released more of these tickets.