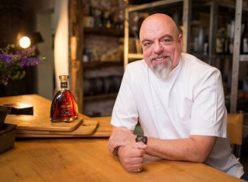 These days dining experiences and food, as a matter of fact, has been corrupted by people, where taste is often just an afterthought to Instagram-worthy dishes. With Pete Goffe-Wood, not so much. There is a bloody good reason that he became so famous in the first place – the guy can cook. Consistently excellent and universally appealing dishes are his signature and we could not resist having him roast us up something real good at the fifth annual Hemel-and-Aarde Pinot Noir celebration that will be held on the 26th and 27th of January 2018.

Pete has been a professional chef for the past 31 years. He was classically trained at the Beverly Hills Hotel in Umhlanga Rocks and worked in London for nine years where he cooked in some of the West End’s award-winning restaurants. He returned to SA in 1999. His work as food alchemist has taken him from the banks of the Chobe River in Namibia to Bangkok, Hanoi and Sydney and even as far afield as Oman in the Persian Gulf. Pete has also cooked in Paris, Budapest, Stuttgart, Istanbul, Zagreb and Moscow. He is the author of three cookbooks: A Life Digested, Kitchen Cowboys and Blues Restaurant – the essence of Cape Town and has written for numerous publications on a freelance basis. He was a judge on MasterChef SA on M-NET for four seasons and appeared at the National Arts Festival in Grahamstown together with comedian Chris Forrest in a cooking comedy show called Don’t Burn Your Sausage.

He’s currently judging Ultimate Braai Master on eTV and consults for the Majeka House, a boutique hotel in Stellenbosch. Pete is also involved at Bosjes in the Breede River Valley – an excellent little spot with inventive dishes – and Bazaar on Florida in Durban. Pete will be roasting on open fires with Franck Dangereux, Nic van Wyk and George Jardine at our incredible Saturday evening event to end of the Hemel-and-Aarde Pinot Noir Celebration 2018, a food and wine fuelled event where the whole is so much greater than the sum of its parts.

If you can handle all the great food and wine we will have available – and we’re betting you can – get your tickets at www.pinotnoircelebration.co.za.