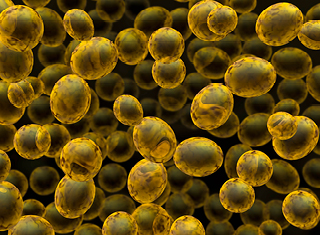 Spontaneous fermentations, driven by the yeast naturally present in grape must or found in the cellar environment, carry a high risk of an undesirable outcome. However, under favourable circumstances there can be a positive and desirable effect on wine flavour and complexity. This is due to specific non-Saccharomyces yeasts found in the crushed grape must. As much as 90 – 100% of the total population of indigenous yeasts are non-Saccharomyces and numerous studies have shown how they can affect the chemical and sensory profiles of wine.1 It is especially Torulaspora delbrueckii species, previously also known by their anamorphic name Candida colliculosa, that have received much attention. Selected T. delbrueckii yeasts isolated in other countries have been commercially dried for use in co-inoculated fermentations with a Saccharomyces cerevisiae wine yeast. This gives winemakers a tool to obtain the beneficial effects of a spontaneous fermentation without the accompanying risks.

A prior laboratory-scale investigation2 found a considerable amount of variation in the fermentation characteristics of 47 South African T. delbrueckii yeast isolates. While most were unable to completely utilise all the grape sugar, some had the potential to complete the fermentation as a single inoculant. Consequently, in this investigation3 nine T. delbrueckii yeast isolates were investigated in single, or co-inoculated fermentations with S. cerevisiae, for small-scale Chenin blanc and Pinotage wine production. The weaker T. delbrueckii fermenters were used for co-inoculation, and the more vigorous fermenters were used for single inoculations.

Nine T. delbrueckii strains, previously isolated from different areas in the Western Cape4 and two reference yeasts (one commercial T. delbrueckii and one commercial S. cerevisiae) were investigated.3 Small-scale wine production trials were carried out in a clarified Chenin blanc grape must (22.2ºB, 7.0 g/L total acidity, pH 3.42) and Pinotage grape must (25.1ºB, 6.3 g/L total acidity, pH 3.38). Seventeen fermentation treatments were initiated in Chenin blanc, comprising single T. delbrueckii yeast inoculations and co-inoculations (T. delbrueckii followed by S. cerevisiae at zero, 24 and 48 hours, respectively). A reference fermentation with S. cerevisiae only was also included. The fermentations were conducted at 15ºC. Nine Pinotage fermentation treatments were also carried out with similar single and co-inoculations at 24°C. All fermentation treatments were performed in duplicate and a standardised white and red wine production method was followed, respectively.1 Residual sugar analyses were performed on all wines to confirm the end of fermentation. After bottling, the wines were stored at 15ºC until sensory evaluation and chemical analyses were completed.

Chemical and sensory analyses showed a T. delbrueckii imprint on the wines. The single inoculant wines had slightly higher glycerol levels than the co-inoculated wines and the S. cerevisiae reference fermentation. The higher glycerol levels can contribute to improved mouth-feel, sweetness and complexity in wines.5 Total SO2 levels for the single inoculant fermentations were higher than those of the co-inoculated fermentations and the S. cerevisiae reference fermentation. However, with one exception, all fell well within the legal limits for South African wine standards (< 160 mg/L; South African Liquor Products Act 60 of 1989). This undesirable trait of increased SO2 levels has previously been reported for single T. delbrueckii fermentations,6 and can negatively affect wine quality and inhibit subsequent malolactic fermentation with SO2 sensitive lactic acid bacteria.7 The volatile acidity produced in the single inoculant and co-inoculated fermentations were similar and slightly higher than the S. cerevisiae reference fermentation, respectively. However, all the values fell within the legal limit for South African wines (≤ 1.2 g/L). The higher values were not expected, as it has been mostly reported that T. delbrueckii strains generally produce lower levels of volatile acidity than S. cerevisiae.8

Analyses of the sensory data showed that single inoculant wines produced with two specific T. delbrueckii isolates resulted in wines with desirable attributes. Wines from the first strain often scored significantly higher in terms of the “guava” aroma note, “body” (mouth-feel) and “general quality”. Wines produced with the second T. delbrueckii strain also scored high and were often judged to be significantly better than the other wines in terms of the “fruity and fermentation character” and “general quality”. These results corresponded with the findings of previous studies that found that non-Saccharomyces yeasts contributed to mouth-feel and improved the quality of wines.9,10 The reference S. cerevisiae wine had amongst the lowest sensory scores of all the wines.

The Pinotage fermentations were all completed within five days. In contrast to the Chenin blanc fermentations, all the T. delbrueckii single inoculated treatments fermented dry (under 4 g/L residual sugar). However, the contribution by the S. cerevisiae natural population cannot be discounted as the red wine production process is more susceptible to contamination by resident S. cerevisiae cellar populations. In the Pinotage wines, there was also no indication that the T. delbrueckii contributed to higher total SO2 levels. Overall, the sensory results showed no notable differences between the wines. This therefore reinforces the observation that T. delbrueckii may have been out-dominated by the growth of the natural S. cerevisiae background resident population and so no T. delbrueckii imprint is evident.

The various co-inoculation treatments all led to dry wines, and in the Chenin blanc, a T. delbrueckii chemical and sensory imprint was evident. A similar imprint was not observed in the Pinotage wines. From the results obtained, two South African T. delbrueckii isolates showed potential as single inoculant yeasts for commercial Chenin blanc production.

The authors wish to thank the ARC Infruitec-Nietvoorbij and Winetech for financial support and the Microbiology team for technical assistance.