Circle of Excellence makes a difference

Empowerment, mentorship and encouragement go hand in hand in the Circle of Excellence project.

Currently the group gathers once a year for an information session supported by cellars, estates, role players and organisations in the wine industry.

Examples of information sessions over the past two years include inter alia a visit to the Elsenburg cellars, where cellar workers learnt more about brandy as a product; a comparative Shiraz tasting, presented in collaboration with Shiraz SA by Elzette du Preez and Charles Hopkins, De Grendel cellarmaster, who talked to the group about the hidden costs in the vinification process.

The members of the Circle of Excellence always make a contribution to the programme of the annual get-together. Cellar workers are involved in the Circle of Excellence programme so that they form part of the project, in order for them to assume ownership and further boost their self-confidence. There is an increasing awareness that their knowledge, which is always impressive, is often underestimated. The exposure that cellar workers receive on these occasions is therefore extremely valuable.

The intention is to offer more than one annual information session for the Circle of Excellence.

These role models in the making, who form part of a circle of excellence, also have an obligation and responsibility towards fellow cellar workers in the wine industry. The knowledge acquired by them has to be taken back to the cellars and transferred to colleagues and fellow cellar workers.

Empowerment is an inherent component of this programme. It is a complex matter, however, which definitely includes mentorship, but also hidden elements such as hope. How does one empower someone if there is no hope? The impact of hope can never be underestimated. People will continue working and aspire to greater heights if they have hope. Hope changes people’s attitude; it improves self-esteem and increases expectations. Only if they are given hope can cellar workers look forward to further career opportunities and promotion. The Circle of Excellence definitely gives hope, for not only does it give recognition to an exceptional group of cellar workers, it empowers further with knowledge and self-confidence.

Individuals are often expected to encourage themselves. However, most new leaders and role models should receive external encouragement to be able to progress. Most people require encouragement to grow. New role models definitely need encouragement to realise their potential; it empowers them by putting a new perspective on things when they make mistakes. The members of the Circle of Excellence are encouraged throughout by means of exposure. The secret to encouraging individuals is to become excited about the right things: in other words take note of cellar workers’ strong points, as well as what they achieve and do correctly.

Regan Theodore, cellar worker at Vergenoegd, Stellenbosch, was a finalist in the SA Cellar Worker programme in 2012 and 2016 and has been a participant in the Winetech study groups since 2009. He considers the Circle of Excellence as a network for cellar workers. It offers him the opportunity to expand his knowledge and to meet other cellar workers.

One of the less obvious challenges faced by cellar workers in the industy is the isolation in which they work. They do not often associate with cellar workers from other cellars and mostly taste the wines from their own cellars only. The Winetech study groups, the Circle of Excellence and the annual SA Cellar Worker information day addresses this isolation to a certain extent. Regan also mentioned that he would like to enhance his practical tasting knowledge and that the Circle of Excellence offered him the opportunity to do so.

Heinrich La Fleur of DGB was a finalist in the SA Cellar Worker programme in 2015 and 2016. He also confirmed that it meant much to him professionally to be part of a group of cellar workers who are acknowledged by the SA wine industry. He was extremely positive about the Circle of Excellence, which offered him the opportunity to get to know other cellar workers who also formed part of the group. He said it was a highlight for him to meet Charles Hopkins from De Grendel. Just like Regan Theodore he confirmed that cellar workers seldom had the opportunity to taste and that the Circle of Excellence enabled them to expand their practical knowledge.

Adjustments to the project are being made on an ongoing basis to ensure that this subdivision of the Winetech study groups remains relevant, in order to make an important contribution to cellar workers’ careers and support cellar workers to achieve their full potential. 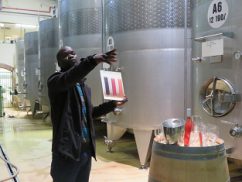 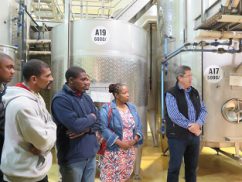 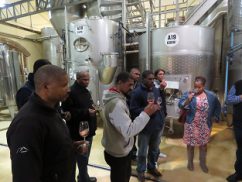