A respectable grapevine yield, in combination with optimally ripe, quality fruit, is of paramount importance towards the goal of sustainable grape farming. Crop thinning is applied widely in the industry, due to a belief that a lower crop load will always lead to improved wine quality. Crop control is, however, not always done in consideration of the grapevine’s capacity to ripen the crop.

By applying early crop thinning, yield reduction may be inhibited by an increase in berry size and/or the number of berries per cluster (more flowers setting) due to compensation effects. Improved methods of defining the grapevine’s capacity to ripen grapes (and therefore the crop retained) are needed and remote sensing, as well as vigour classification, may be important in achieving this, as well as in strategizing towards a decision on crop control for the whole vineyard.

The main aim of a project conducted in a Shiraz/101-14 Mgt vineyard on the slopes of the Simonsberg Mountain in Stellenbosch was to evaluate the potential effects of manual crop thinning on the reproductive and vegetative balance of the grapevines in differing vigour areas within a vineyard. Its potential effects on grape composition and wine sensory attributes were also considered. More details and results are also available in Quixley (2007).

A ratio vegetation index multispectral aerial image (Figure 1) was studied and three vigour levels were identified. Grapevines in each plot were then subjected in a random design to three crop thinning treatments at pea-size, namely 0% (control), 25% and 50% crop reduction based on bunch counts on the control grapevines. 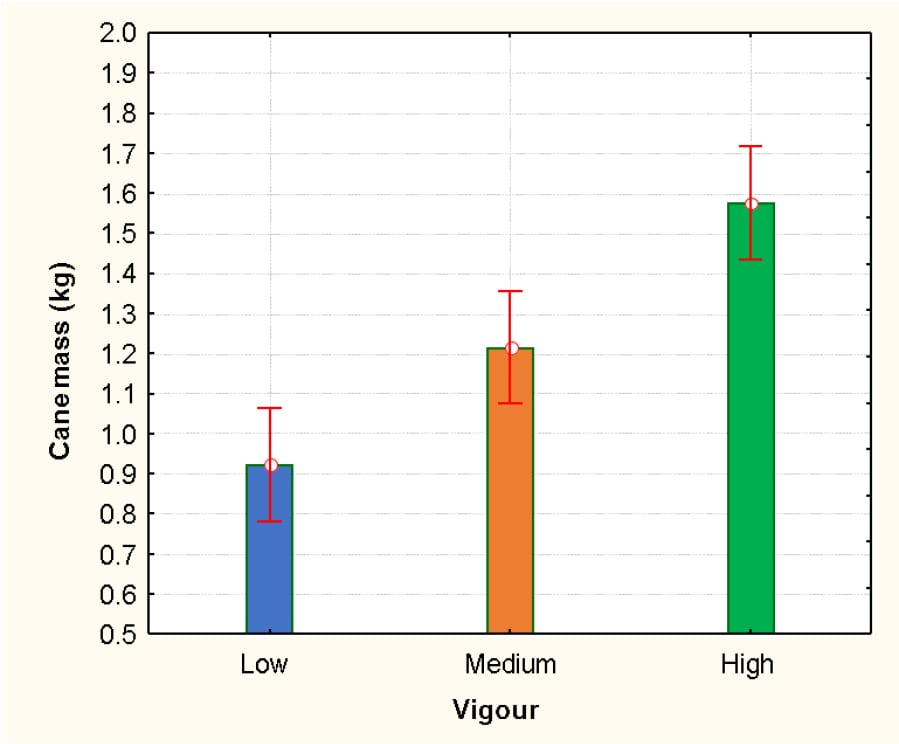 Berry sampling was carried out throughout the season in the different plots and berry/juice analysis were performed. Final berry mass at harvest differed between the vigour levels, and interestingly, crop reduction increased berry mass in the higher vigour grapevines, but 50% crop control notably reduced it in the medium and low vigour plots (Figure 3). It is reasoned here that drastic early crop control in more stressed vines inhibited berry development rather than stimulating it. 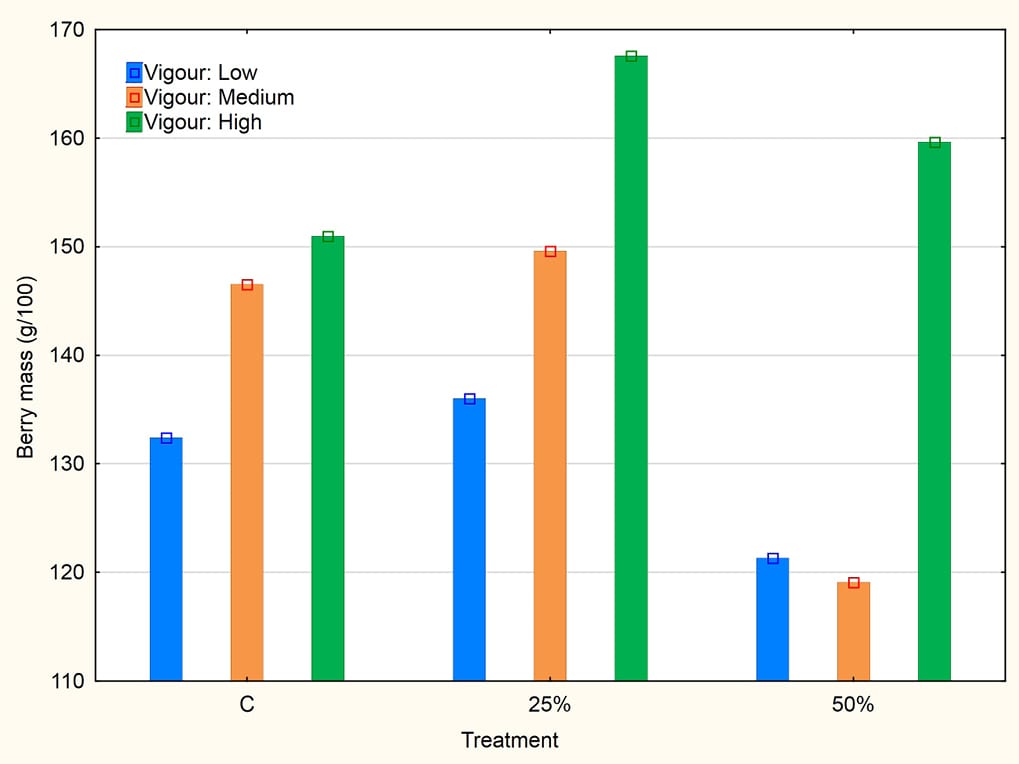 FIGURE 3. Berry mass at harvest for the different vigour (low, medium and high)/crop thinning treatments (25%, 50% and control) in the Shiraz vineyard.

Notable is the large difference in average bunch mass in the higher vigour grapevines (Figure 4). The compensation (“recovery”) effect here was therefore deemed minimal on yield, which was surprising considering the early reduction, as well as that in the 50% yield reduction treatment, yield was reduced from 9.3 kg average to 5.2 kg average per grapevine (data not shown). This is equivalent to a reduction from 24.8 tonnes per hectare to 13.8 tonnes per hectare. 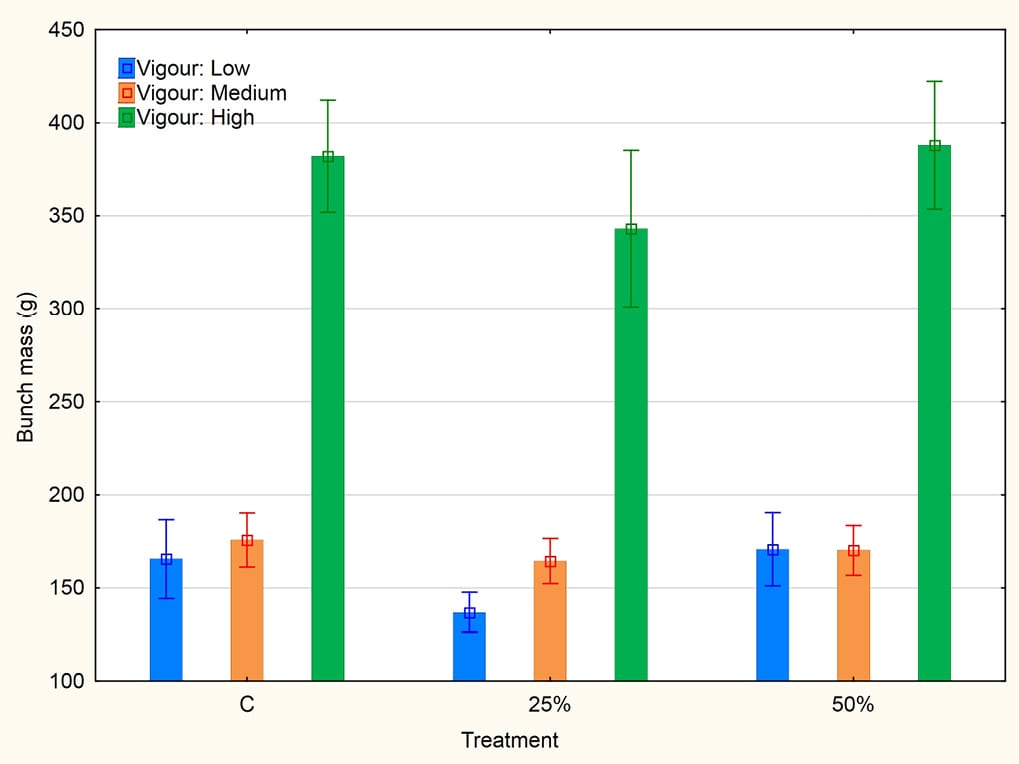 FIGURE 4. Bunch mass at harvest for the various vigour (low, medium and high)/thinning treatments (25%, 50% and control) in the Shiraz vineyard.

As expected the high vigour grapevines struggled more to attain sugar, but here crop reduction had a positive effect, in advancing total soluble solids accumulation. The 50% reduction, however, added only a slight benefit above the 25% reduction, but had negative effects on grape juice pH throughout (see later). 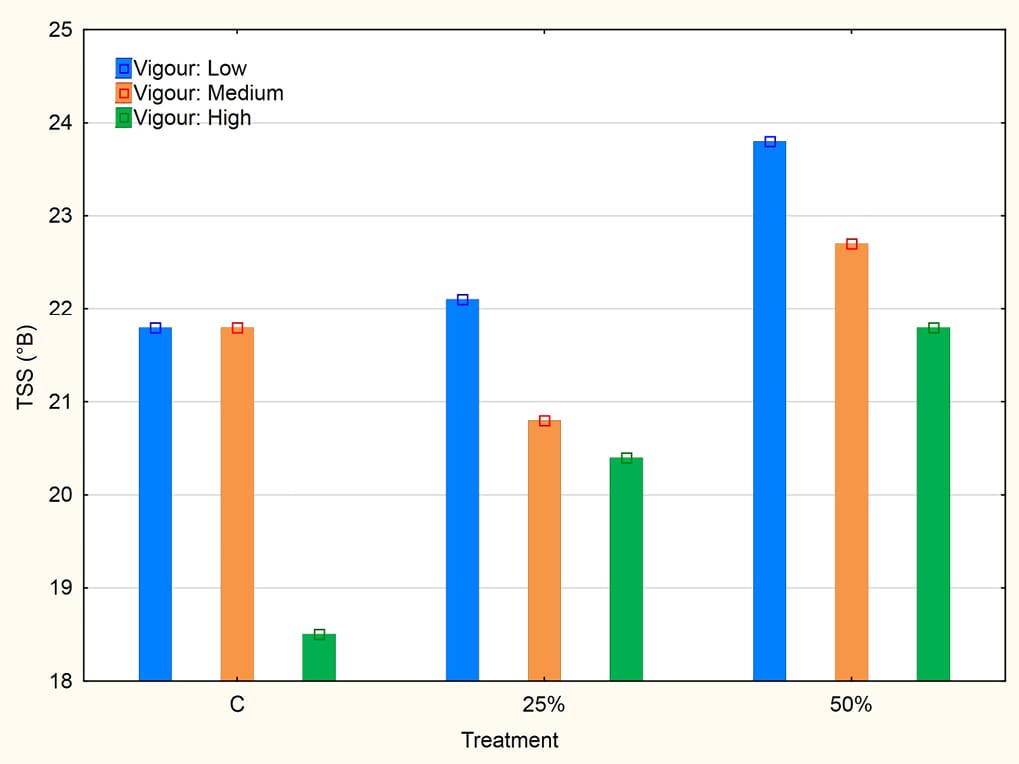 FIGURE 5. Total soluble solids (°B) at harvest for the different vigour (low, medium and high)/thinning treatments (25%, 50% and control) in the Shiraz vineyard.

The sugar per berry results (Figure 6) affirmed that the drastic crop reduction treatments in fact also reduced the sugar accumulated per berry – which reaffirms a possible negative effect of this drastic reduction on photosynthetic functioning and/or transport of assimilates to the berry. 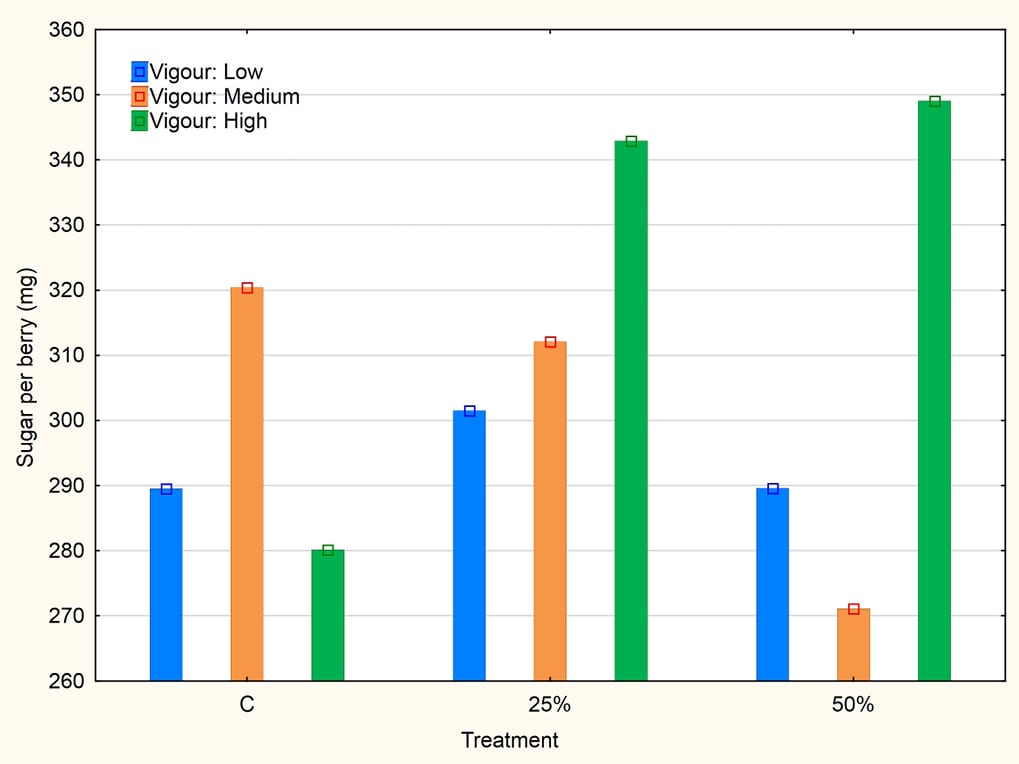 FIGURE 6. Sugar per berry (mg) at harvest for the different vigour (low, medium and high)/thinning treatments (25%, 50% and control) in the Shiraz vineyard.

The crop reduction, especially 50%, increased pH levels in the berry (Figure 7) and led to low titratable acidity levels as well (data not shown). The reasoning why is that the reduction of fruit caused preferential loading of potassium (which already had high levels above 100 mg/kg in the soils of the low and high vigour plots) into the berry due to the grapevine scaling down on its photosynthetic potential when fruit are removed, with the result of potassium rather than sucrose being the dominant component transported into the berry. 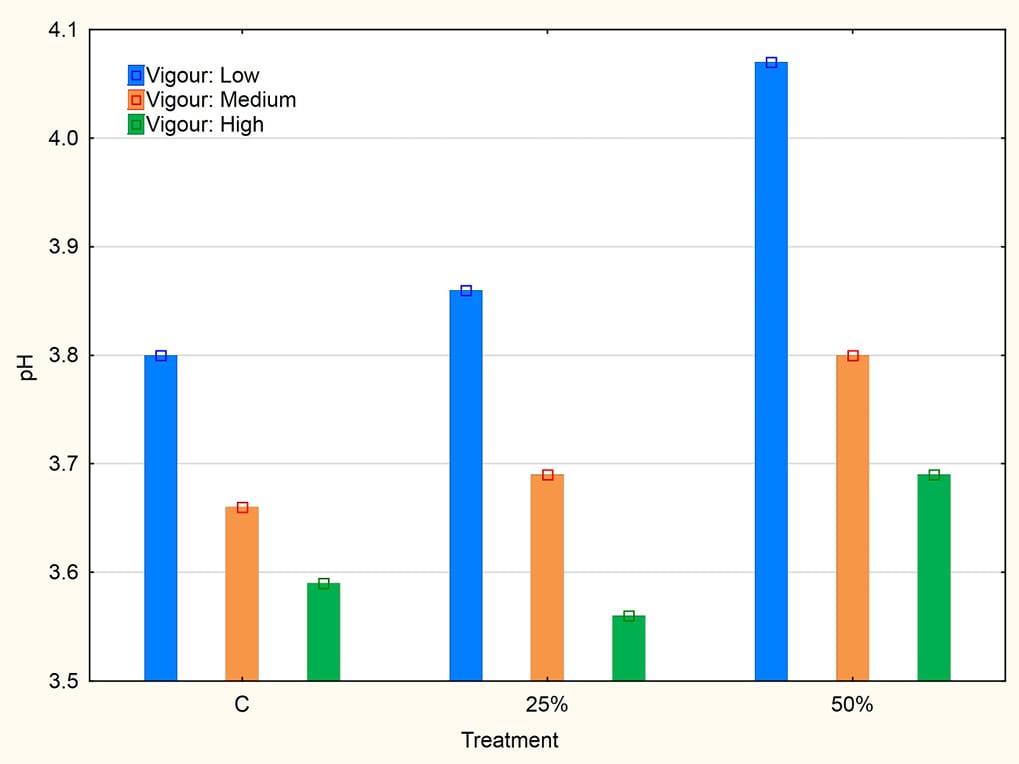 FIGURE 7. Grape juice pH at harvest for the different vigour (low, medium and high)/thinning treatments (25%, 50% and control) in the Shiraz vineyard.

It was clear that there is a definite benefit of assessing within-vineyard vigour when assessing the capacity of a grapevine to ripen grapes. Crop thinning seemed to benefit the grapevines already having limited capacity to ripen grapes due to possible excessive leaf shading/ageing (high vigour plot), but it seemed to negatively affect the grapevines with low vigour, mainly due to an increase in the already high juice pH levels in these grapes.

The results showed that in a vineyard with high vigour variability, a single crop control strategy could lead to either a wastage of fruit or even quality reduction. Considering that the common commercial strategy for the vineyard studied here was a seasonal reduction of approximately 50% of the harvest, irrespective of vigour, this practice can be legitimately questioned. In an article by Ross (1999), it was stated that “talk about low yields does sell wine” and “growers like to talk to journalists about low yields, and journalists like to hear things like that”.

Producers are urged to consider the potential negative effects of drastic crop thinning on the performance of a grapevine, which in this experiment seemed to be “tuned to” the crop it is bearing, with the grapevine adapting negatively with regard to photosynthetic performance when the crop is removed – this has previously also been shown in potted grapevines where fruit were removed early, and photosynthesis was measured.

When crop thinning is applied in a variable vineyard, it seems that moderate thinning only on the most vigorous grapevines that exhibit large bunches, leaves and shaded canopies may have more benefits than a “blanket” thinning action throughout the vineyard.

Crop control was evaluated in a Shiraz vineyard block with vigour variability, where it was previously performed close to véraison, with about half the crop removed. A randomised design was followed removing no crop, 25% and 50% by bunch counts in three distinct vigour areas. Results showed that the benefits of crop reduction at pea size stage may be highly over-estimated compared to fruit loss, and that it may even affect some grape juice parameters negatively, especially on lower capacity/stressed vines, with no large advantage observed with respect to wine sensory attributes and colour.

Quixley, P.C., 2007. A study of the interaction between vine vigour, harvest dates and crop level and their effects on grape and wine characteristics. M.Agric (Admin) Thesis, Stellenbosch University.