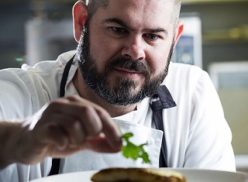 Take great food and a beautiful view, drown them in fine wine, and you’ve basically reached your life apex. The 5th annual Hemel & Aarde Pinot Noir Celebration, held on the 26th & 27th of January, will comprise of several incredible events throughout the weekend – with the grand finale on Saturday the 27th of January being a culinary experience of note. Fire-kissed meat roasted and fish en plein air by four top chefs will take your taste buds on a tour through one of the most beautiful wine countries in the world. Over the next couple of weeks we’ll be individually unveiling the chefs that will be collaborating with us and doing outrageously tasty things to roast chickens. You might smell like smoke the next morning, but be prepared to be forever changed.

Meet Nic van Wyk. Known for his bold flavours and sauces, Nic started out in the kitchen of renowned Chef Franck Dangereux of La Colombe – his love of classic French cooking was a perfect fit under Franck’s command. Nic then went on to open Terroir Restaurant in 2004, which won the Eat Out Best Restaurant two years later in 2006. Nic has also been involved with restaurants such at The Barnyard Brasserie, Diemersdal Eatery and he ran his own restaurant, Bistro 13, for three years.

His television career started in 2013 with the launch of kykNET’s reality cooking show ‘Kokkedoor’ – as co-judge he was involved with the show’s first and second season and was back on screens as judge alongside Mari-Louis Guy, in 2017 for the spin off Kokkedoortjie, which sees the show adapted to showcase children aged 9-13 busy creating and cooking. Over the years Nic has consulted and worked with many brands, including Parmalat, Simonsberg, Plaisir De Merle, Stellenbosch Wine Routes, De Warenmarkt and the Transcape Mountain Bike stage race. He was invited to take part at the Mid Atlantic Food and Wine festival in the United States in 2015. Nic currently heads up the kitchen at the iconic Haute Cabriere wine farm in Franschhoek, with partner chef Westley Muller.

Book your weekend ticket at https://pinotnoircelebration.co.za/.