Touriga or Touriga Nacional, to give its full name, is a native Portuguese red variety that is one of the key components of Portuguese Port. It is not well known as a grape variety, even in its native land as it is almost always used in blends. Thus, if you have ever enjoyed Portuguese Port you will have almost invariably tried Touriga Nacional. It is the leading and best known Portuguese variety used for making both vintage and tawny port.

Touriga Nacional along with Touriga Franca, Tinta Roriz, Tinta Amarela, Tinto Cao and Tinta Barroca make up the vast majority of the grapes used in making Port. They are also the best quality grapes out of the list of 82 allowable grape varieties which can be used in the making of Port. Out of these 82 varieties, 30 are recommended whereas the other 52 are simply allowed, despite being judged as minor/lesser varieties. Can you imagine being told by the government what varieties can and can’t go into a particular wine style. This is a concept that is totally bizarre to us here in Australia, however, it is common place in the “old world” wine growing regions of Europe such as, Oporto.

According to Darby Higgs excellent new book, “What Varietal is That?” Touriga Nacional is ranked as the 67th most planted grape variety on the planet.  Here in Australia at present according to www.vinodiversity.com there are just on 50 wineries growing Touriga. The vast majority of Touriga in Australia is grown in the warmer regions such as the Barossa, Rutherglen and Riverland. These are closer in climate to its native Porto region of Portugal than cooler areas such as Canberra, Yarra Valley, Bendigo and the Victorian Alpine region. Incidentally whilst Touriga is an emerging variety here in Australia, there are some very old Touriga vines in Rutherglen and the Barossa as the variety was originally planted in these regions for the production of Australian Port more than a century ago.

In the vineyard Touriga is an extremely vigorous variety and needs to be kept on a tight leash, including severe pruning, in order to produce quality wine. Surprisingly for such a vigorous variety, the vine produces only a few small bunches of very small black/blue grapes, thus being one of the lowest yielding varieties used for the making of wine. In order to overcome this challenge, in recent years scientists in Portugal have been working hard on clonal selection with the aim of improving the yields by being able to better pollinate the variety.

Because the berries are so tiny, the skin-to-flesh ratio is very high leading to wines which are very aromatic but with a high to very high tannin content. This is part of the reason why straight varietal red wines are the exception in Portugal, with most of their red table wines being blends of several “port” varieties rather than single varietals as we are more accustomed to here. Intrinsically the variety offers good cellaring potential. Touriga ripens late in the growing season making it more susceptible than many other varieties to the impact of changing vintage conditions.

For the tasting associated with this article, several producers were kind enough to send through one or more back vintages of their Touriga wines. This is always great as it allows us to see the development of the wines over the years, both in terms of its maturation and also how the style changes and evolves as the winemaker becomes more comfortable and familiar with this emerging variety. 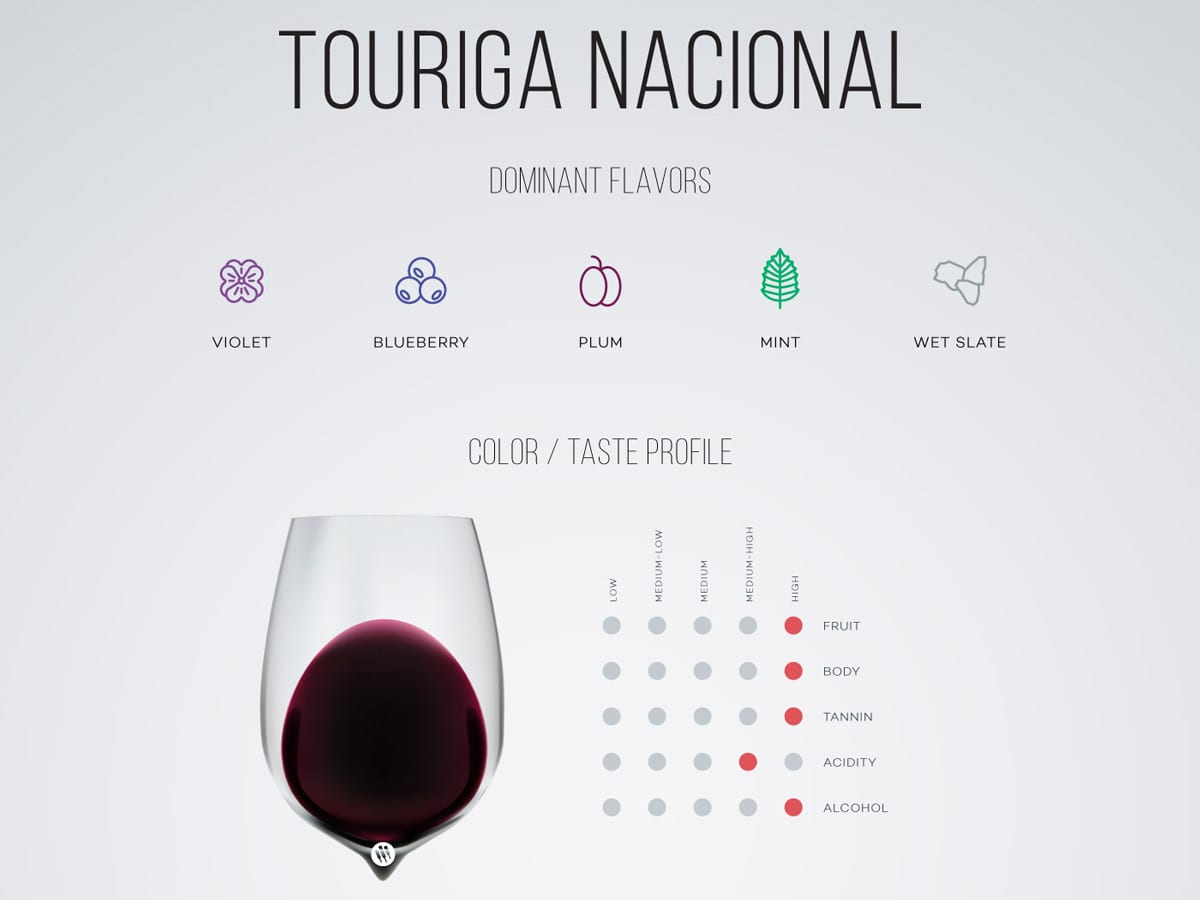 Vinteloper Wines from Langhorne Creek sent the 2010, 2016 and 2018 vintages which was a great example of the “learning curve” with the wines growing in depth and complexity with each vintage. Their style has also developed into a more “drink now” style which is ideal for these “now” times that we are living in. The other Langhorne Creek representative was New Era Vineyards with their Touriga Nacional Basket Pressed 2015 and the 2016 that was more svelte and elegant than its masculine elder brother. Both appealing wines but the 2016 is just that little bit classier.

McLaren Vale was ably represented by the Battle of Bosworth 2016, 2017 and 2018 Organic Touriga, with each successive vintage being slightly bigger bodied and richer than its predecessor. In particular, the 2018 had some gorgeous “Christmas Pudding” characters making it absolutely divine.

From First Drop Wines in the Barossa, we tasted the 2014, 2015 and 2017 Nacional (Touriga) wines and again you could see the stylistic development over the vintages, becoming more stylish and sophisticated.

Another Barossa producer was Dell’uva Wines in Greenock with a 2014 Touriga that has all the right stuff to be a great wine. It just needs a bit more time to fully integrate and show its true potential.

The final but by no means least Barossa wine was from Seppeltsfield with their fresh young 2018 Touriga. Despite its youth this gorgeous wine is ready to enjoy right now with lovely cherry and chocolate characters leading to a bright, crisp finish.

The Riverland was represented by 919 Wines, 2016 Touriga, which is an absolute sensation, with masses of colour, complex aromas and oodles of rich flavour.

Western Australia was ably represented by Mazza Wines, 2014 Touriga, made from vines planted in 2002. It is bright and spicy on the bouquet, smooth and tasty on the palate with a perfect fruit to acid ratio so as to make it oh, so drinkable.

The other ‘westerner’ was Myattsfield Wines with their brilliant, ‘Left Field Club’ 2016 Touriga, which was made by their Portuguese lady winemaker. This wine is deep and dark in colour with spicy nutmeg aromas, a hint of fruit sweetness on the front palate, gentle oak and beautiful balance. Superb! As one of the panellists said, “This is the style to aim for”.

Unfortunately a direct comparison between Aussie Touriga and Portuguese ones wasn’t possible as most of the Portuguese Touriga wines are blends without stating so on the label. Thus one can’t compare apples with apples, but I can tell you that the Portuguese Touriga-based wines I have tasted thus far have all been really enjoyable, tasty, well balanced wines.

There were as many blended wines submitted for this tasting as there were straight varietals, which is unusual for emerging varieties. Usually the winemakers focus on the varietal examples first before tinkering with blends.

The blends that really shone in the tasting were the 2015, 2016 and 2017 Stanton & Killeen “The Prince”, a blend of Touriga, Tinta Cao, Tinta Roriz, Souzao and Tinta Barroca. Wow! What a mouthful! But also what a wine! The 2015 is just really starting to hit its straps as a magnificent, silky-smooth, divine wine. Stanton & Killeen Wines have well and truly mastered this exotic blend.

The other standout in the blends was the S.C. Pannell Tempranillo/Touriga- a blend that works really well. Made from McLaren Vale and Barossa fruit, the style has been evolving from the 2014 through to the 2017 vintage. They describe it perfectly as being, “Naturally balanced, complex and full of flavour”.

Other notable blends included the Mazza 2017 Touriga/Sousa from Geographe in Western Australia, which is brilliantly balanced, smooth and rich. A ripper wine.

Big Easy Radio from Langhorne Creek, make a rare combination of Touriga and Malbec, of which they submitted a tank sample of their 2018 and a bottle of their 2016. The 2018 was outstanding and will be simply stunning when it is released, while the 2016 is, as one panellists said, “pretty, bloody good”.

From the (relatively) colder King Valley region in Victoria, we had the Piano Piano ‘Mario’s Blend’. The vintage 2015 was a Tempranillo/Touriga blend, whereas the 2016 was a Touriga/Tempranillo blend, with the latter being preferred by the tasting panel, i.e. heading in the right direction.

Overall, the blended wines tasted proved to me that Touriga “plays well with others” and it is a cracking variety for blending.

Interestingly, the main reason that this variety was first brought into this country was to use in the blending of fortified wines. So the final wines in the line-up for this Touriga tasting were three fortified wines. These consisted firstly of the very elegant Myattsfield “Kenneth Green” 2006 Vintage Fortified (500mL), which was an unusual blend of Touriga, Durif and Shiraz. It was more in the Portuguese style (slightly lighter, very elegant and less sweet) of fortified than the Australian (heavier, sweeter and bigger bodied). It had some hints of sarsaparilla on the bouquet and a smidge of nutmeg on the delicious palate – very drinkable.

The other two fortifieds were from the renowned Rutherglen fortified producer, Stanton & Killeen Wines, who sent a Vintage 2000 Port and a Vintage 2006 Fortified, which is a blend of Touriga / Tinta Cao / Tinta Barroca / Shiraz / Durif. A real melange of varieties and flavours. Both are made in the bigger, Australian style with the 2006 being an absolute cracker at 13-years-old.

While it is still early days, I strongly suspect that the real future of Touriga Nacional here in Australia will be as a “blender” – either taking the leading role as in the wonderful, Stanton & Killeen ‘The Prince’ blend or as the junior partner like in the classy, S.C. Pannell Tempranillo Touriga blend. Although the straight varietal wines are pretty darn good, the well-structured Touriga blends are absolute belters!! I believe that they have a great future in Australian wine.

So here is to Touriga the Terrific!!!

DAN TRAUCKI is an Australian freelance wine journalist and a wine industry consultant. Dan can be contacted at dan@wineassist.com.au. This article first appeared in Wine Business Magazine Australia.