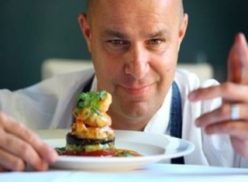 Even at the beginning of a new year no one ever needs a break from red wine and butter –that is why we invited French-born Franck Dangereux to roast some things for us at the 5th annual Pinot Noir Celebration. His phenomenal addition the South African food scene, The Foodbarn in Noordhoek, is a destination restaurant and the perfect spot to eat and hang out on a laid-back afternoon with a great bottle of wine. Our intention was to bring a real, simple, and maybe even somewhat entertaining approach to our Pinot party and Franck’s ‘Frenchness’ combined with unexpected flavour will do exactly that.

Franck was born in Cannes into a family who loved a good feast. Food was central to whatever else was happening and by the time Franck hit his teens, he knew that he would be a chef. At the age of 15 he started his training at the Nice Hotel School, trained with Roger Verge from Moulin de Mougins and by the tender age of 18 Dangereux was slogging away in Michelin 3-star restaurants in Paris. Later Franck travelled to St Bart in the Caribbean where he started a restaurant at the top of a hill. Whilst working in the Caribbean he came to South Africa on a holiday in 1987 to visit an uncle and was blown away by the country. It was his first visit to South Africa and the people, the mountain, the climate and the light delighted and enthralled Franck so much that he stayed for an entire month.

Franck returned to the Caribbean, then worked in Northern Africa, but South Africa was always at the back of his mind. After Nelson Mandela’s release he felt that there were exciting times and opportunities in South Africa and he made his way back to his uncle. Franck started working with Franck Swainston at Constantia Uitsig. For Franck it was a new phase of his journey as a chef. A gastronomical revolution was happening in South Africa and Franck’s enjoyment of being in the kitchen and working with about 10 other chefs as part of the movement was a quest. Franck had grown up and his pursuit in the world of food was to achieve perfection and to cook with sensibility, simplifying his dishes to the perfect combinations. In 1996 he created La Colombe restaurant on Constantia Uitsig farm. It is no surprise that during his 10 years there La Colombe was voted restaurant of the year six times and was also placed 28th on the list of the world’s best restaurants in 2006.

Franck’s next adventure was joining up with Pete de Bruin and starting the Foodbarn at Noordhoek Farm Village. Linked to a stage in his personal life, Franck had met his wife and with two boys (now eight and eleven years old) and a lifestyle that Franck had always dreamed of. Rooted in his classic fine-dining training, Franck’s latest quest is to share his knowledge with us mere food mortals whilst creating a culture of unpretentious, but fine dining.

Catch Franck cooking on open fire at the Hemel & Aarde Pinot Noir Celebration that will be held on the 26th & 27th January 2018.

For more information and to buy tickets visit https://pinotnoircelebration.co.za/.