A day in the life of a cellar worker 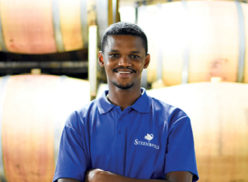 A wine cellar is a hive of activity and a critical component of a successful winery.

It’s often said wine is made in the vineyard and terroir, topography, soil and climate are critical for the production of outstanding wine. However the work that’s done in the cellar is just as vital as the alchemy that takes place in the vineyard.

Winemaker RJ Botha is the cellar manager at Stellenbosch-based wine estate Kleine Zalze where he works alongside winemaker Alastair Rimmer. RJ describes a typical day in the cellar as “exciting, busy and fun” and says, “Every day is a learning experience.”

Charles Fillies is a cellar worker at Steenberg, one of the wine estates on the historic Constantia Wine Route, and works alongside cellar master JD Pretorius. Charles’ day begins with a meeting with JD and the rest of the Steenberg team during which the tasks for the day are allocated. “In my case, these tasks range from cleaning the tanks, racking the juice, and filling and moving barrels,” Charles says. “I sometimes help out with deliveries if needs be.”

RJ says a cohesive team and attention to detail are critical elements for success in the cellar. “Attention to detail is the difference between an ordinary wine and a gold medal wine. So it’s important for us to ensure we keep ahead of the game and carry on making world-class wine.” He says it’s the small things that matter such as making sure a bucket is clean and the tools are spotless and packed away. “It’s the basics that need the most attention,” he says.

Charles agrees with this notion. “Attention to detail is very important. If the tanks aren’t clean when the juice gets racked into the tank, it’s my fault and I can ruin the product. I’m very aware of not making any mistakes.”

Remaining professional and attentive can be challenging, especially during the frenzy of harvest season. “During harvest, time is very tight and it becomes challenging to manage all my tasks and perform them to my best ability in the short time frame,” Charles says. The rapid growth in technology also keeps everyone on their toes. “When new equipment is bought, we all learn how to use it and that can be challenging but also exciting.”

South African industry bodies estimate that due to the ongoing drought the 2018 harvest yield could be similar to that of 2005 and result in estimated losses of more than R700 million. To mitigate the effects of the drought, cellar teams have had to show ingenuity in their winemaking practices.

At Kleine Zalze all the water pipes have been fitted with stoppers and the cellar is cleaned with brooms as much as possible. “We’re in the process of building a new closed dam and collecting water from an underground fountain,” RJ says.
“I hope we’ve created a mind shift, not just at the cellar but in South Africa. Without water we can do nothing and everyone should do their bit at work and at home to save water.”

Water-saving devices have also been introduced at Steenberg. “We recycle the water used in our cellar during the day and use it to wash down the cellar at the end of the day,” Charles says. “We’re waiting for a filtration system to be fitted which will filter the water used in the cellar so it can be used for flushing the restaurant toilets.”

Accountability is emphasised at Steenberg. “JD teaches us to be accountable,” Charles says. “If we see a leaking tap, we must fix or report it. We need to always think ahead and keep the bigger picture in mind.”

He has completed fire-fighting and forklift-driving courses, but says he’s gained most of his experience on the job. For those wanting to pursue a career in the wine industry, he has the following advice: “Work hard, be willing to learn and always have a positive attitude and a smile on your face.”

JD, who holds a BSc degree in agriculture and oenology, has also completed a forklift-driving course and several wine-tasting courses so he can keep up with international wine trends and palates. He says passion is critical. “Working in a cellar is not always glamorous and if you don’t have passion for vineyards and wine you’ll never survive.” For those interested in a career in wine, he advises, “Start at the bottom and work yourself to the top. Travel as much as possible – the journey is amazing.”

A healthy balance between work and play is critical, so Charles and the Constantia Valley teams often enjoy braais after work. “I have two young kids at home so there’s no relaxing after a long day at work at the moment,” JD says. “But I’d like to spend a bit more time cycling and fishing.”

Despite the difficulties, wine’s journey from the vineyard to the bottle can be exhilarating. “The most rewarding part of the winemaking process is seeing the entire process take place, from witnessing the grapes arriving at the cellar to seeing the wine leaving the cellar, bottled and labelled,” Charles says.