A day in the life of a winemaker 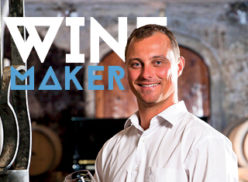 WINEMAKER CHRIS ALBRECHT’S ACHIEVEMENTS EVIDENCE HOW A REMARKABLE CAREER IS BUILT ONE HARVEST AT A TIME. BY TSHEPANG MOLISANA

Chris Albrecht was appointed winemaker at Bouchard Finlayson in 2017 after working alongside iconic winemaker Peter Finlayson as his assistant for seven years. Like a good Burgundy a career in winemaking is not built in a day, but requires time. Years of training, dedication and unparalleled passion have prepared Chris for his role at the helm of one of South Africa’s premier Chardonnay and Pinot Noir producers.
“You can’t be everything to everyone,” he says. “If you’re always following trends you’re going to fall behind. It’s best to establish yourself as a producer of excellence and stay on the right track.”
After completing a degree in viticulture and oenology at Stellenbosch University, Chris decided to gain experience abroad and worked six harvests in three countries. He spent three years in New Zealand where he worked two harvests, one in Gisborne and another in Auckland. In Bordeaux, France, he worked harvests at the Côtes de Bourg and Lalande de Pomerol.
Upon his return to South Africa, he won acclaim as the winemaker at Topiary Wines in Franschhoek. During his four years at Topiary, his 2008 and 2009 Blanc de Blanc MCC were awarded five stars in Platter’s SA wine guide. While at Topiary he took a brief sabbatical and spent a vintage at Paraduxx in California. He subsequently joined the Bouchard Finlayson team as Peter Finlayson’s assistant.
Bouchard Finlayson in the Hemel-en-Aarde Valley near Hermanus is the embodiment of heaven on earth. Established in 1989, the 125 ha cool climate estate with 25 ha arable land mostly under vine, has achieved international acclaim for its award-winning Chardonnay, Sauvignon Blanc and Pinot Noir. The grapes for Kaaimansgat Chardonnay are sourced from a farm with which Bouchard Finlayson has a gentlemen’s agreement.
Bouchard Finlayson’s legacy is carried in the palms of its passionate winemakers such as Peter Finlayson, who’s best known for producing exceptional Pinot Noir which he fondly calls “a difficult mistress”. Their efforts have paid off as Bouchard Finlayson Galpin Peak Pinot Noir continues to seduce oenophiles worldwide. In 2017 the Galpin Peak Pinot Noir was rated South Africa’s top Pinot Noir in the South African Wine Index with a 100 point score.
The ruby-coloured wine derives its name from the purple Erica Galpin, a flower that’s indigenous to the farm, Bouchard Finlayson resident horticulturist and botanist Frank Woodvine says. Bouchard Finlayson is a World Wildlife Foundation (WWF) Champion. Humble about Galpin Peak’s acclaim, Chris says the wine owes its success to the conditions under which it’s produced. “I’m of the opinion that the right varietal, grown at the right time under the right conditions will thrive.”
The task of caring for the soil and respectfully working with the land to produce exceptional wines is a challenge they regards as important during challenging climatic conditions. The looming threat of drought and low rainfall are a constant cause for concern. Bouchard Finlayson’s production team are painfully aware of the need to protect water as a precious resource and care for the vines and understand the climatic conditions under which they grow.
The care with which the vines have to be treated will probably result in higher prices for most South African wines. “There’s a reduced crop in dryland vineyards,” Chris says. “Price is likely to be affected by this.”
Walking past the crush pad, he describes how the winery is designed to handle the 300 tonnes of grapes the farm produces annually. “The crush pad is a hive of activity during harvest time. We’re currently experimenting more with open-top fermentations. Fermenting Chardonnay in new oak probably emits the best smell during harvest.”
Each element of the winemaking process is important to the winemaker, Chris says, from growing the grapes on the vines to harvest, fermentation and bottling.
Asked about his thoughts on old vines, he says a great vineyard will always be great. “It’s all about balance. A great old vine was once a great young vine. The right vine, situated at the right place in the right soil with adequate sunshine is primed to thrive.”
Perhaps the notion of nurturing vines under the right conditions is also true of winemakers. Chris was promoted to head of production at Bouchard Finlayson from the 2017 harvest. The early start on misty February mornings has resulted in rewards for both the wine and the team that created it.
The 2013 Galpin Peak Tête de Cuvée Pinot Noir was awarded a gold medal at the 2016 International Wine & Spirit Competition (IWSC). In 2017, the 2015 Missionvale Chardonnay was awarded gold at the same competition. The 2015 Galpin Peak Pinot Noir also won gold plus the regional trophy at the 2017 IWC.
Ever humble, Chris attributes the Estate’s achievements to its holistic approach to winemaking. “It’s all about typicity and consistency,” he says. “It has as much to do with the site as style of winemaking.”
Bouchard Finlayson’s perennially good wines are proof of the importance of Chris’ unwavering patience and persistence. 

Each element of the winemaking process is important to the winemaker.