The aim of this study was to evaluate the effect of different rotation crops used by nurseries on BFD and CRR pathogens by detecting and quantifying these pathogens in nursery plants and soil.

Grapevine decline is a disease complex that affects young vines in all grape growing regions of the world and leads to a lower survival rate for young vines. A major contributing factor to grapevine decline is black foot disease (BFD), and crown and root rot (CRR). Studies in South Africa have shown that BFD and CRR pathogens are present in nursery vines as asymptomatic infections. Black foot disease of grapevines is a serious soilborne disease occurring mainly in nurseries and young vineyards, and are more often encountered at disease clinics (Department of Plant Pathology, SU and ARC Infruitec-Nietvoorbij) than CRR.

Black foot disease of grapevines is caused by species of the genera Dactylonectria (previously known as Cylindrocarpon), Ilyonectria (previously Cylindrocarpon), Campylocarpon, Cylindrocladiella and Thelonectria. The BFD species are soil inhabitants and are regarded as saprobes and weak pathogens, and infect roots through wounds and natural openings. In nurseries, the most visible symptoms include plants with reduced vigour, shortened shoots and internodes, sparse foliage and interveinal chlorosis. Upon dissection of the roots and basal ends of rootstocks, black discolouration, gum inclusions of the xylem vessels, and brown vascular streaking can be observed. A reduction in root biomass and root hairs, and sunken necrotic root lesions may also be observed on afflicted plants. In young vines (less than five years old) death can occur rapidly. All BFD pathogens except Campylocarpon species can produce thick-walled chlamydospores which would allow these pathogens to persist in the soil for long periods.

Crown and root rot is caused by species belonging to the genera Phytophthora, Pythium and Phytopythium. Root and crown rot symptoms include black to brown root necrosis, while the above ground plant parts show typical decline symptoms, such as stunted growth, leaf chlorosis, wilting, die-back, poor fruit-set and shoot growth. It has been reported that some Phytophthora spp. may even infect the crowns and cause cankers which may girdle grapevine trunks. This girdling may then lead to plant collapse. The infected vines may be isolated or occur in small groups. CRR pathogens can produce sexual oospores that can persist in the soil.

Nursery soils in South Africa are known as an inoculum source for BFD and CRR pathogens. The treatment of BFD is limited to cultural practices, such as hot water treatment, as there are no fungicides registered against this disease. However, the treatment for CRR involves cultural practices, as well as the use of phosphonate fungicides. The extent to which BFD and CRR pathogens are present in nursery soils is not known. Also the influence of rotation crops on the occurrence of BFD and CRR has not been investigated, and could hold potential in an integrated control strategy.

The objectives of the study were:

Total DNA extractions were done on the soil samples. The pathogen DNA in these total soil DNA samples were then quantified using optimised Quantitative Real-Time Polymerase Chain Reaction (qPCR) protocols for the detection of Phytophthora species, Pythium irregulare, and Dactylonectria and Ilyonectria species. qPCR is a molecular technique used to detect and quantify target DNA in a sample (soil), while the DNA amplification can be viewed in real-time.

Dactylonectria and Ilyonectria species, Py. irregulare and Phytophthora DNA was successfully detected, and quantified from grapevine nursery soil. The Dactylonectria and Ilyonectria DNA was detected in all nursery soil samples, except for one site in one nursery, and ranged from 0.04 pg.μL-1 to 37.14 pg.μL-1. The Py. irregulare was detected in all nurseries (though not for all sites with 22 of the sites testing negative over the three-year period of sampling) with the DNA concentration in the soil that ranged from 0.01 pg.μL-1 to 3.77 pg.μL-1. Phytophthora DNA was detected in all samples except for three sites in one nursery in 2013. The Phytophthora DNA concentrations ranged from 0.01 pg.μL-1 to 29.53 pg.μL-1. Pathogen DNA concentrations increased over the three years for four of the nurseries. 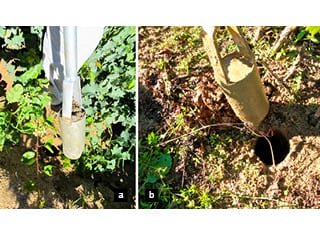 PICTURE 1. Soil samples were taken with an auger. Nursery soils were different as can be seen from a dryer soil (a) versus a more waterlogged soil (b).

Pathogen (fungal and Oomycete) isolations were done from the grapevine cuttings, weeds and rotation crops. Isolations were made from the roots and vascular tissue of the grapevines onto potato dextrose agar, and Pythium and Phytophthora selective media. The fungal and Oomycete cultures were identified using Polymerase Chain Reaction (PCR), and sequencing of two gene regions (ITS-rDNA and histone H3).

A total of 176 BFD and 108 CRR pathogen isolates were obtained. The predominant BFD pathogens isolated from grapevines in these nurseries were Dactylonectria macrodidyma, Campylocarpon pseudofasciculare, and Ca. fasciculare. Symptoms associated with BFD could be seen on the vines isolated from (Picture 2). Other BFD pathogens, such as D. novozelandica, D. toressensis, D. alcacerensis, D. pauciseptata and I. liriodendri, were isolated as well. The predominant CRR pathogens were Pythium irregulare followed by Phytopythium vexans. The other CRR pathogens isolated included Pythium sylvaticum, Py. ultimum, Py. heterothallicum, Py. rostratum, and Phytophthora niederhauserii. 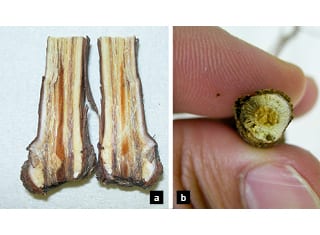 No correlations could be made between DNA concentrations and occurrence of pathogens in vines or rotation crop. However, one nursery had no pathogens present in the vines isolated from, and the concentration of the Dactylonectria and Ilyonectria DNA was significantly less than two other nurseries for all three years. This nursery is situated on the slopes of a hill and makes use of ridging as a method to improve soil drainage. Other factors that could also contribute to this, could be that it does not have a long history of grapevine nursery cultivation and implements a three-year rotation system, whereas two-year rotation systems were used in the other nurseries sampled.

The soil characteristics determined by the laboratory tests were all considered to be within the normal ranges (Dr. F. Ellis, personal communication). Therefore, stress as a result of nutrient deficiencies or salinity were deemed to be negligible. The soil wetness index is an important characteristic which indicate the potential of a soil to become waterlogged. Four of the nurseries are situated in a production area with low lying alluvial soils which is prone to wetness and also had higher soil wetness index. These soil conditions can contribute to the occurrence of BFD or CRR pathogen infections.

The presence of the pathogen DNA in the soil, as well as in grapevine plants, shows that pathogen inoculum persists in the soil during the crop rotation year. The DNA concentrations in the crop rotation year (2014) for Dactylonectria and Ilyonectria species, as well as Phytophthora species, were equal or higher than in the first grapevine year (2013) investigated. This, together with the fact that the DNA concentrations for these pathogens were higher in the second grapevine year investigated (2015), indicate that the pathogens survive successfully in the soil or in the roots and basal ends of specific weeds and rotation crops.

This study has highlighted the possible effects of soil wetness, rotation crops, crop rotation system (two- vs. three-year rotation systems), and cropping history on the incidence of BFD and CRR pathogens in grapevine nurseries in the Western Cape. The complexity of interactions and diversity of factors involved, preclude the drawing of concrete conclusions with regard to crop rotation system to be used to suppress soilborne pathogens. A more extensive study over a longer period of time should be conducted on the suitability of different rotation crops currently used in grapevine nurseries in South Africa and especially the contribution of Brassica crops for biofumigation.