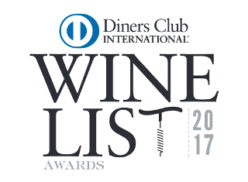 The 2017 Diners Club Winelist Awards were announced on Monday 31st July at the Beverly Hills Hotel in Umhlanga, KZN. Now in its 23rd year, the Award honours the best wine lists in the country. This year, 225 restaurants from the Western Cape, Eastern Cape, KwaZulu-Natal and Gauteng submitted menus for judging.

Wine lists are evaluated according to content, balance, suitability and presentation, and judges are all experts in the restaurant and wine business, including reviewers, members of the media, chefs and sommeliers from the South African Sommeliers Association. The judging panel was convened and headed by Platter’s Guide publisher Jean-Pierre Rossouw.

“This year, we tightened the standards and set expectations higher – so kudos to the restaurants that rose to the challenge,” says Rossouw. “The Diamond award is becoming a more and more prestigious achievement and we congratulate the entrants that offer diners high quality winelists.”

Awards are presented in Gold, Platinum and Diamond categories. There were 13 Diamond Award winners in Gauteng, seven in KwaZulu-Natal, nine in the Western Cape, and three in Southern Cape.

Other 2017 Diamond Award winners were: