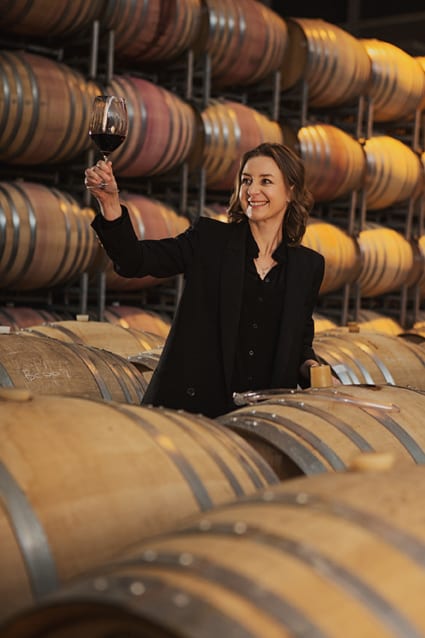 The new head winemaker at Distell is Andrea Freeborough. Cellar-master at Nederburg since 2015, she will be leaving her position at the Paarl winery at the end of May to take up her new role in overseeing the production of South Africa’s largest wine portfolio.

Distell’s diverse and globally traded range extends from premium brands such as Nederburg, Durbanville Hills, Fleur du Cap and Alto (which, amongst others, now form part of Distell’s new premium wine company, Libertas Vineyards & Estates), all the way through to more mainstream offerings such as 4thStreet, Two Oceans and Drostdy Hof.

“Andrea will be carefully looking after our wine brands from a top-line perspective, managing all aspects of winemaking by working hand-in-hand with our talented winemakers and viticulturists,” says Johan Venter, who heads up Distell’s Centre of Excellence: Intrinsic, and to whom she will be reporting in her new role.

“With her impressive qualifications, excellent sensorial instinct, and close to two decades of successful winemaking experience under the belt, Andrea has certainly proven her ability to lead top-performing teams, to innovate and experiment, and to simultaneously create specialty wines and those aimed at broad appeal.

“This makes her ideally placed for the role of Distell head winemaker. We are confident that with Andrea’s solid track record in running a cellar, making wine, and dealing with a multitude of people, processes and departments, she will provide outstanding direction and inspiration to our wine brands.”

Armed with BSc Hons degrees in viticulture and oenology from the University of Stellenbosch, Freeborough’s working life began as an assistant winemaker at Neethlingshof in Stellenbosch. Less than three years later she was appointed a fully-fledged winemaker, working under Nederburg cellar-master Razvan Macici, producing the whites. Obviously with great proficiency, because four-and-a-half years later, still in her very early 30s, she was appointed to head Distell’s Die Bergkelder, a job she held for a decade before returning to Nederburg to take over from Macici in 2015.

It’s a modest account of her working life, considering that many of her award-winning Nederburg and Fleur du Cap wines, and others made under her direction, suggest a woman of considerable talent and leadership skills, not to mention an impressive ability to balance work and family life. Just the ingredients to take over the winemaking helm at Distell.

Freeborough is married to Michael-John and they have two children, Leah-Jessica and Josh.