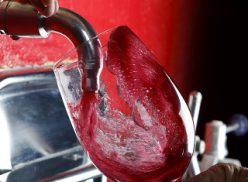 Non-Saccharomyces yeast species contribute to the aroma and flavour of wine due to metabolic products resulting from their growth. These metabolites include terpenoids, esters, higher alcohols, glycerol, acetaldehyde, acetic acid and succinic acid. The yeasts also play a role in releasing volatile aroma compounds from non-volatile precursors and increasing polysaccharide concentrations in wine. Although far less studied, non-Saccharomyces yeasts can affect the phenolic compounds, i.e. anthocyanins and flavanols, of wine.

The major non-yeast derived chemical compounds in red wine are the phenolics constituting the sub-groups of flavanols (contribute to mouthfeel) and anthocyanins (contribute to wine colour), which are present in grape skins and seeds. The colour of red wine, which is an important quality parameter, is primarily dependent on anthocyanins. The concentrations of anthocyanins in grape berry skin vary with grape cultivar and are affected by viticultural practices and environmental conditions. The anthocyanin profile of a given grape cultivar is linked to its genetic composition.

The anthocyanin and flavanol profiles of red wine are known to undergo some modification during winemaking, because of physicochemical and biological factors. The transformation of grape juice into wine is a complex microbial reaction involving the sequential development of various yeast species responsible for alcoholic fermentation and lactic acid bacteria responsible for malolactic fermentation. These microbial populations can potentially affect the anthocyanin profile of red wine through three distinct processes, i.e. anthocyanin adsorption on cell walls, microbial metabolite-mediated formation of anthocyanin derivatives (acetylated and coumarylated) and anthocyanin hydrolysis. Cell adsorption of anthocyanins is considered a strain-dependent property within a specific yeast species which varies with the polarity of the anthocyanin. During alcoholic fermentation yeasts release secondary metabolic products, such as pyruvic acid and acetaldehyde, which react with anthocyanins to produce more or less stable coloured derivatives, such as vitisin A, vitisin B and ethyl-linked anthocyanin-flavanol pigments. It is known that S. cerevisiae wine yeasts are among the contributors which decrease the phenolic concentration in wine, but the latest technology using non-Saccharomyces yeasts for wine production adds another variable to this topic. Therefore, this study investigated the effect of the non-Saccharomyces yeast, T. delbrueckii on the anthocyanins, flavanols and sensorial attributes of Pinotage and Cabernet Franc wines.

Pinotage and Cabernet Franc grapes for vinification were obtained from the Nietvoorbij Research Farm of the Agricultural Research Council in Stellenbosch. The two yeast species used as single inoculants for wine production were T. delbrueckii (strain 654) and a commercial S. cerevisiae strain (VIN 13, Anchor Bio-Technologies). Three replicates of each yeast treatment were conducted over three vintages (2011 – 2013). Yeast starter cultures were cultivated in a yeast extract-peptone-dextrose broth and inoculated at a concentration of 1 x 106 cells/mℓ.

Pinotage and Cabernet Franc grapes were harvested at an average Brix of 25.3°Brix and 23.5°Brix, respectively, over the three consecutive vintages. Wines were made according to a standardised small-scale winemaking procedure in the Nietvoorbij Research Cellar at an ambient temperature of ca. 25°C. Malolactic fermentation was not induced for any of the wines.

High-performance liquid chromatography with photodiode array detection (HPLC-DAD) was used for the quantification of anthocyanins and flavanols. The identification of the phenolic compounds was confirmed by their relative retention times and UV-visible absorption characteristics.

Sensory analyses were conducted on the wines five months after bottling. Sensory analyses involved the evaluation of colour intensity, berry aroma, mouthfeel and overall quality for Pinotage and Cabernet Franc wines with the addition of herbaceous aroma for the latter. The judges rated the wine sensory attributes on a 10 cm unstructured line scale. The chemical and sensory data were statistically analysed to help explain differences in the generated data.

Pinotage and Cabernet Franc grape musts’ sugar averages over three years were slightly different (Table 1) with Cabernet Franc ca. two °Brix higher in total soluble solids than Pinotage. This was also reflected in alcohol concentration differences of ca. 13% for Pinotage and ca. 15% for Cabernet Franc wines. Total acidity was higher in Pinotage grape must, compared to Cabernet Franc grape must, while the average pH values were similar for both grape cultivars over the three vintages. Considering the expected variability between vintages within a grape cultivar, the analyses of the base musts in terms of physicochemical parameters were of sufficient similarity per cultivar to make comparisons in wines derived from the yeast treatments.

Monitoring of the fermentations showed that the T. delbrueckii treatments took the same or double the time to ferment to below 0°Brix, compared to S. cerevisiae treatments (data not shown). This was expected, as it is known that the T. delbrueckii yeasts are slower fermenters than S. cerevisiae yeasts. However, the skin contact time, with the exception of the 2013 Cabernet Franc, was the same for a grape cultivar. This ensured that anthocyanin and flavanols extraction were the same for a specific yeast treatment per vintage. The Pinotage wines had a shorter skin contact time (5 – 7 days), compared to the Cabernet Franc wines (7 – 14 days) over the three vintages.

Volatile acidity concentrations of the treated wines were similar (Table 1), except for Cabernet Franc wines fermented with T. delbrueckii, which were highest. Glycerol concentrations for both grape cultivars were above 5.2 g/ℓ (Table 1). This is the level where a sweet taste is detected. Cabernet Franc wines were highest in glycerol levels. Glycerol can also contribute to smoothness (mouthfeel) and complexity in wines.

Pinotage and Cabernet Franc grape cultivars reacted to both yeast treatments. There are clear differences in sensory scores, phenolic compounds (anthocyanins and flavanols) and physicochemical parameters of Pinotage and Cabernet Franc wines made with S. cerevisiae and T. delbrueckii yeasts. In this study T. delbrueckii is the preferred yeast for Pinotage grape must and S. cerevisiae the preferred yeast for Cabernet Franc grape must in terms of anthocyanins (colour) and flavanol (mouthfeel/tannins) concentrations. Only one strain of each yeast species was used in this study. It is expected that a similar trend may be observed for other strains. However, due to the high genetic variability found amongst yeast strains within a species, this observation should be substantiated with further research.

This article is an adapted version of a publication: Minnaar, P.P., Ntushelo, N., Ngqumba, Z., Van Breda, V. and Jolly, N.P., 2015. The effect of Saccharomyces cerevisiae and Torulaspora delbrueckii yeasts on the anthocyanins and flavanols of Cabernet Franc and Pinotage wines. South African Journal of Enology and Viticulture 36, 50 – 58. We publish with permission.