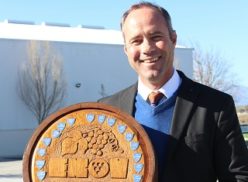 The Elsenburg Cellar Technology Alumni Association (Ekov) presented their award for top achiever at their 35th annual general meeting which was attended by large numbers of alumni at Aan de Doorns Cellar in Worcester recently. The award is based on the winner’s awards in wine competitions and progressive wine activities over the long term.

Pierre Wahl, head winemaker of Rijk’s in the Tulbagh district, received the Ekov Award for Top Achiever this year. Pierre and his team have won many awards and have especially made their mark with South Africa’s indigenous red wine cultivar, Pinotage. Constant and increasing acknowledgement for products of top quality played an important role in the award.

Since the first Absa Top 10 Pinotage competition in 1997, Rijk’s has been one of South Africa’s top achievers with this cultivar by producing one of the Top 10 Pinotage wines eleven times in 13 vintages. Other achievements include Platter 5 Stars for Cabernet Sauvignon, Shiraz and Pinotage, as well as producing best on show three times in nine years at the Michelangelo International Wine Competition, for Pinotage, Chenin Blanc and Chardonnay. Pierre was also nominated as member of the Cape Winemakers Guild in 2010 and in 2016 was crowned Diners Club’s Winemaker of the Year with the Rijk’s Private Cellar Chenin Blanc 2014.