Grapevine trunk diseases are caused by a complex of pathogens including Phaeomoniella chlamydospora, species of Botryosphaeriaceae, Diatrypaceae, Diaporthe and Phaeoacremonium. They lead to premature decline and dieback and are therefore of great economical importance to wine and grape industries across the world.

As pruning wounds were shown to be the main infection portals of these pathogens, it is of utmost importance to protect them against the whole complex. Researchers have commonly focussed on protecting pruning wounds against infection by using various fungicides such as benomyl and tebuconazole. However, pruning wounds have been proven to stay susceptible to infection for up to 16 weeks and with most fungicides having only a limited period of residual action, doubt arose to their ability to provide long-term protection. Biological control agents on the other hand offer the potential to provide long-term protection of pruning wounds.

The aim of this study was to identify, through in vitro and in vivo trials, biological control agents that provide protection of pruning wounds against infection by a range of trunk disease pathogens.

In vitro evaluation of the potential biocontrol agents against the trunk disease pathogens involved the observation of antagonistic interaction between cultures on dual inoculated plates. Biocontrol agents and antagonists were placed opposing one another on a Petri dish containing potato dextrose agar (PDA). Microscopic interactions were investigated by co-incubating pathogens and biocontrol agents on synthetic nutrient agar medium. Mycelium plugs were removed from the interaction zones and placed on a microscope glass slide where the hyphae were observed with a compound microscope.

Merlot and Chenin blanc vineyards were spur-pruned to three buds in August 2006. Immediately after pruning, wounds were treated by spraying with a suspension of each of the commercial products according to their registered rates, as well as spore suspensions of USPP-T1 and T2 at 106 spores per mℓ. Bacillus subtilis was applied at a rate of 108 cells per mℓ. Benomyl and sterile deionised water (SDW) served as the control treatments. Seven days after pruning and application of biocontrol treatments, each pruning wound was inoculated with a spore suspension of E. lata, Pa. chlamydospora, Diaporthe ampelina and species of Botryosphaeriaceae (Neofusicoccum australe, N. parvum, Diplodia seriata and Lasidoplodia theobromae). Controls were treated with SDW. Eight months after pruning and treatment, the top internode below each treated pruning wound was removed. The incidence of the inoculated pathogens and Trichoderma was determined by means of isolations from the xylem tissue on the edge of the dieback region and plated onto Petri dishes containing PDA. 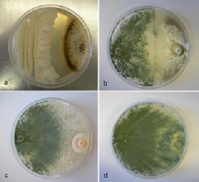 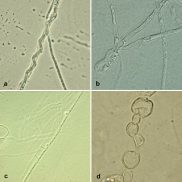 Trichoderma harzianum isolates, Ag 2, Ag 11, AgSS 28, ECO 77 and Biotricho, predominantly grew over each of the pathogens. Generally, microscopic interactions such as “coiling” and “hyphal adhesion”, as well as “hyphal disintegration” were associated with over growth. The interactions observed for the T. atroviride isolates, Ag 3, Ag 5 and Ag 8, were similar to those observed for the T. harzianum strains, Ag 2 and Biotricho. The two Trichoderma isolates, USPP-T1 and USPP-T2, had a substantial effect on all trunk disease pathogens, with a wide range of macroscopic and microscopic interactions observed. In dual cultures with B. subtilis, all the pathogens were inhibited and showed little mycelium growth and clear inhibition zones were observed. At microscopic level, malformations of the hyphae occurred; more specifically swelling of the hyphae.

All pruning wound treatments, biological, as well as the benomyl treatment, significantly reduced the incidence of E. lata in the inoculated pruning wounds compared to the water treated control wounds (37.5%) (Table 1). The most effective treatments for reducing the E. lata incidence in inoculated wounds were Vinevax (8.2%), USPP-T1 (9.1%), USPP-T2 (11.0%), ECO 77 (10.7%) and B. subtilis (10.7%) compared to the untreated water control (37.5%). Biotricho also reduced the incidence of E. lata, but to a lesser extent (15.0%). Benomyl (19.6%) was the least successful treatment.

Isolations from unprotected pruning wounds that were inoculated with Diplodia seriata, Lasiodiplodia theobromae, Neofusicoccum australe and N. parvum yielded 37.5, 32.6, 44.7 and 22.1% incidences of Botryosphaeriaceae species, respectively (Table 1). Botryosphaeriaceae incidences in all pruning wound protection treatments were significantly lower than the untreated inoculated controls, except in the case of N. parvum inoculated wounds where B. subtilis (16.5%), USPP-T2 (16.2%), benomyl (15.5%) and Vinevax (13.9%) treated wounds yielded statistically similar levels to unprotected wounds. The most effective treatment against all Botryosphaeriaceae species was USPP-T1 (2.5 to 9.6%), which was also more effective than benomyl, except with N. australe inoculated wounds.

The incidence of Pa. chlamydospora in the inoculated water controls was statistically higher (34.6%) when compared to all the treatments. Vinevax (7.21%), USPP-T1 (7.8%) and Benomyl (12.5%) were the best performing treatments compared to B. subtilis (21.8%) and Biotricho (23.6%) which were the least effective.

Bacillus subtilis, the Trichoderma products, Vinevax, Biotricho, ECO 77, and isolates USPP-T1 and -T2 generally reduced the incidence of the inoculated grapevine trunk disease pathogens compared to the untreated control when given seven days to colonise the wound before infection. In most cases the biocontrol agents were more effective than the benomyl control treatment.

Considering the ability of Trichoderma to sustain its presence, long-term protection of pruning wounds with Trichoderma-based products could provide an effective tool in the management of pruning wound pathogens. Trichoderma atroviride isolate USPP-T1, and to some extent USPP-T2, were very effective at reducing infection of the pruning wounds when challenged seven days after treatment with the pathogens evaluated. Therefore, the potential of these isolates as pruning wound protectants should be studied further, especially with regard to mechanism of control, cultivar susceptibility and application methods.

Long-term pruning wound protection is required for prevention of infection by grapevine trunk disease pathogens. This study evaluated several biocontrol agents against a range of fungal trunk disease pathogens in dual plate laboratory trials to determine macroscopic and microscopic interactions. The best performing biocontrol agents were tested in two field trials. Fresh pruning wounds were treated with benomyl, Trichoderma products (Biotricho®, Vinevax® and ECO 77®) and isolates (USPP-T1 and -T2, identified as T. atroviride) and Bacillus subtilis. Seven days after treatment the pruning wounds were inoculated by spraying with spore suspensions of Neofusicoccum australe, N. parvum, Diplodia seriata, Lasidoplodia theobromae, Eutypa lata, Phaeomoniella chlamydospora or Diaporthe ampelina. Eight months after inoculation, the treatments were evaluated. The efficacy of the biocontrol agents was in most cases similar or superior to that observed for benomyl. Isolate USPP-T1, in particular, was very effective in reducing D. ampelina, E. lata, Pa. chlamydospora, N. australe, N. parvum, D. seriata and L. theobromae by 69%, 76%, 77%, 78%, 80%, 85% and 92%, respectively. This is the first report of biological protection of grapevine pruning wounds against a complex of grapevine trunk disease pathogens.

This article originates from research funded by Winetech and the final report of project US PP 04 2004, “Diagnosis,epidemiology and integrated management of trunk diseases of grapevines”, can be downloaded from http://www.sawislibrary.co.za/dbtextimages/Winetech2010_12.pdf