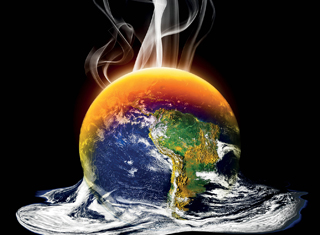 Are the abnormally dry, warm conditions our new normal?

The drought that struck South Africa last year was one of the worst since recordkeeping began. In an era of increasing awareness about climate change, it also raises the inevitable question of how the agricultural sector – including the wine industry – should adapt if the abnormally dry, warm conditions we’ve experienced of late are to be become the new normal.

Higher temperatures are almost a certainty in future, according to the Smart Agriculture for Climate Resilience (SmartAgri) project’s brief to the wine sector. The brief, which was published last year, focused on climate change in the Western Cape and its impact on the wine industry. Expected increases in the annual mean temperature by the middle of this century are in the 1.5 – 3°C range.

The project identified the major threats climate change poses to the wine industry, including a decrease in total production, a shift in the balance of sugars and acids which could affect the character of wines, and smaller intervals between the main grapevine growth stages and an increase in pest pressure.

Numerous scientists, viticulturists and other experts in the industry have considered how to cultivate vineyards for long-term sustainability in dry conditions. Vink Lategan and Dr Johan van Zyl of Stellenbosch University’s department of soil science emphasise the importance of soil preparation to adapt to less frequent irrigation.

“Soil preparation before planting of grapevines should be done to overcome any physical or chemical obstacles and ensure the development of a deep root system,” Lategan says. “During the establishment of grapevines, it’s essential that irrigation be done less frequently and to wet deep soil layers. Locally wetting irrigation systems with drip irrigation must be used to prevent water loss due to evaporation.”

Lategan and Dr Van Zyl advise wine producers to plant cultivars such as Pinotage, Chardonnay and Merlot that ripen earlier. Mulching and irrigating at specific stages – especially between the flowering, fruit set and véraison stages – are also important as it decreases the amount of irrigation required. Producers should also exploit the grapevine’s origin as a Mediterranean plant by choosing drought-resistant rootstocks, consultant Professor Eben Archer advises.

Another recurring talking point among industry stakeholders is the management of current water resources.

Agrifusion director Frans van Wyk says repairing and raising Clanwilliam Dam and expanding the hectares that the Brandvlei Dam could irrigate are important steps for the optimal use of current water schemes. Using pipelines instead of canals to transport water would also greatly limit the amount of evaporation that occurs, he says.

Dr Willem de Clercq of the Stellenbosch University Water Institute (SUWI) says producers need to adopt the principles of water stewardship, as demonstrated effectively by farmers in the Ceres area.

“Producers should take greater responsibility for their environment,” he says. “There should be no leaks or damage to equipment, and you should carefully examine your impact on the environment. You can get by with half the water you’re currently using by applying these principles.”

Local wine producers also need to look beyond South Africa for solutions to a global problem. Lategan says Australia and California have been struggling with drought for close on three years and “tend to over irrigate in general”.

A recent issue of the Journal of Wine Economics dedicated to wine and climate change, contains assessments from leading winemakers in countries such as Germany, France, America, Italy, South Africa and Australia. The conclusion is that cool grape-growing regions feel the detrimental effects of larger weather variability, the higher frequency of extreme weather events and increases in pest pressure, while warmer regions deem global warming a challenge but have already adapted in numerous ways.

Van Wyk says South Africa can learn from Australia’s use of satellite technology and forecasting tools to improve water management. Lategan and Dr Van Zyl also advocate the wider use of soil water and irrigation monitoring equipment to see to what depth they irrigate and to compare soil water conditions.

“The technology is out there,” Van Wyk says. “We have to make the available technology relevant for our own context and empower producers to make better choices.

“We know innovation often doesn’t occur until the going gets tough. But I’m convinced there’s enough determination and drive among producers to make it work. I don’t think we’re standing on the edge of a cliff – I’m actually childishly optimistic, because this is an opportunity for innovators to be a step ahead of their competitors.”