Facts about the echalas training method 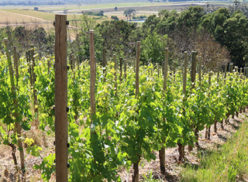 Echalas, also known as ‘staked vines’ or ‘stok-by-paaltjie’, is mostly used in the wine producing regions of Côte-Rôtie in France, Priorat in Spain and Mösel in Germany. It is not exactly clear when the first echalas vineyard was planted in South Africa. Currently, the total echalas plantings in South Africa amount to approximately 30 hectares, according to Sawis statistics (February 2016).

In which circumstances is echalas a good consideration?

Which cultivars are less suited to echalas?

Which cultivars are suitable for echalas? 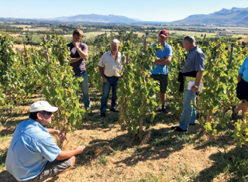 At the IGWS echalas/’stok-by-paaltjie’ workshop, Chris Loubser, manager at L’Ormarins, explains how the crown of the grapevine is shaped during pruning. (Photo: Lucinda Heyns.)

– If you would like to receive viticulture related information from the IGWS or be informed about workshops such as these, contact Lucinda Heyns at leheyns@sun.ac.za.