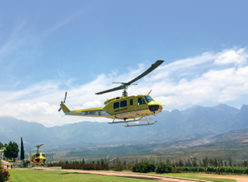 Natural disasters such as fire are a given. But with strong partnerships, good communication and solid action plans wild fires can be brought under control.

Be safe. Be careful. Be aware. This was the message from Western Cape local government, environmental affairs and development planning MEC Anton Bredell at the launch of the wildfire season preparedness programme at Vergelegen, Somerset West, in December last year. He also stressed the importance of cooperation adding, “Disaster management is all about partnerships. When there’s a disaster all the partnerships under the disaster management umbrella stand together.”

During a spectacularly visual (and loud) aerial display during which a mock veldfire was extinguished, the effectiveness of the above-mentioned partnerships was clearly demonstrated. Bringing together the various air and ground teams during the control of a fire is an impressive feat that requires communication, teamwork, skill and hard work.

The programme launch also showed that the provincial government and its firefighting partners are ready to respond to fires effectively and as fast as possible. This finely tuned group effort is a must in a province that was ravaged by close on 10 000 fires from April 2016 to March 2017. The impressive array of fire-fighting assets includes 24 aircraft (including eight helicopters and four fixed wing water bombers) and 4 000 contract, stand-by and seasonal firefighters.

“Planning is critical when you’re fighting a fire,” Working on Fire general manager Shane Christian says. “And partnerships – these must grow. Firefighting is everybody’s responsibility which means local government, municipalities, communities and landowners must work together.”

Vergelegen MD Don Tooth says the Estate has made a huge effort to be more prepared for fires. “Alien vegetation is a big fire threat and we’ve come to a point where 95% of the property is completely alien-free.” Sharing anecdotes about a helicopter trip during a firefighting exercise on the Estate, he illustrated the dangerous working conditions pilots face and the level of skill required of them.

“For any given property or area we do a full-blown risk assessment,” CPFPA treasurer Pierre Gallagher says. “We look at compliance and grading of risk in respect of human life and assets. By using an integrated fire management approach, we can be more effective with protection, prevention and suppression.” His main fire preparedness tips are:

Fire season is upon us. Working together and staying alert are all part of fire preparedness. And in case of fire, call 112. 