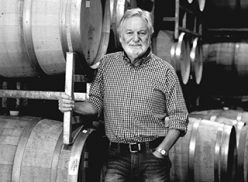 The world is filled with opportunity, when viewed from Charles Back’s perspective. In fact, it’s a little awkward to receive yet another lifetime achievement award when you still have so many new ventures in the pipeline!

There’s a long list of things that excites Charles Back, the winner of this year’s 1659 Medal of Honour. Tourism is right up there. And so is the new generation of winemakers. “This crop is different,” explains the winemaker, cheesemaker, farmer, marketer of note and, most of all, entrepreneur. I asked him if it’s difficult for someone who’s been a pioneer throughout his career to now operate in a much more competitive environment. His answer was simple: “Well, you just have to do it better!”

Entrepreneurs have never been known for their negativity …

Charles describes the potential brought about by the shift in wine tourism as nothing less than “massive”. Authenticity is the new luxury and this bodes well for South Africa, which is ideally placed to offer an off-the-beaten-track wine experience. And in the case of Fairview and neighbouring Spice Route, these experiences are increasingly diverse, with craft and authenticity as the golden threads that run through everything.

Travelling to the Western Cape provides perspective, which in turn drives wine sales once tourists are back home. Tourism is one of the key reasons Fairview has worked hard to expand its footprint in the domestic market and particularly in Cape Town. If wines are unavailable for tourists to enjoy while they’re in South Africa, why would they buy them when they’re back home?

Fairview and Spice Route boast some of the highest visitor figures in the Cape winelands. The challenge, Charles says, is to retain the connection with visitors once they leave the farm gate. He admits he hasn’t quite cracked it, but his standards are high so it’s probably only a matter of time.

Thank goodness the Parker era is officially no more! The Deparkerisation of wine entails moving away from the heavy, extracted and over-oaked palate of American wine critic Robert Parker. Yes, it affected South African winemakers, including Charles, but he has always been mindful of the acute importance of finesse. This is increasingly becoming a hallmark of South African wines – particularly trendy, rediscovered Cinsaut and Grenache. Perhaps that explains why the new crop of winemakers is different.

“We still haven’t unlocked the full potential of Mourvèdre,” Charles says. “Similarly, new pockets of terroir are rewriting the story of South African wines and shifting barriers in terms of what can be achieved.” He adds that blended wines suit South Africa and there’s still a gap in the market for serious Rosé.

It’s customary when being awarded the 1659 Medal of Honour a video is made where close relatives and industry stalwarts sing the praises of the new honouree. Unsurprisingly, Charles decided to do things differently by asking his workers to do the talking on the video. This is the Fairview way – the empowerment of employees is a key priority and the rewards keep on coming!

When I ask Charles what keeps him awake at night, his response is: “Besides the peacocks, I worry about not doing my job well enough. There are more than 500 people who work here and rely on a business that keeps growing.”

Fortunately the success of the business doesn’t rely on Charles alone. Management is deliberately being decentralised and the responsibilities of middle management are particularly being expanded. “It seems obvious, but ownership of responsibilities can completely shift behaviour and improve efficiencies,” Charles says. “That’s what the Khulanati project is about: Ownership, responsibility and understanding why your role is important.”

Charles is unfazed by the new minimum wage. In fact, he would like to increase his wages by 25% across the board. “But then labour legislation needs to be relaxed – particularly in terms of hiring and firing. That would expose and resolve many inefficiencies. We should strive for productivity, but we’ve lost our competitive edge through high costs.”

Not many in the wine industry would argue that engaging with unions presents opportunities. Which is what Charles has done. Good labour relations prove his point and the broader industry can learn a great deal from Fairview’s approach of reaching out when it comes to labour relations. Then again, Charles is bound to spot the opportunity in just about everything. May he forever be the innovator and entrepreneur at heart!