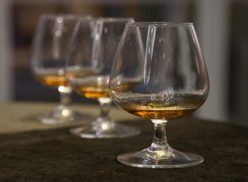 The new Veritas Vertex Award for the overall champion wine from 1 638 entries for the Veritas Awards 2017, stole the show among a record number of medals at the gala dinner last night (Friday 6 October) at the CTICC in Cape Town.

It was awarded to Spier 21 Gables Chenin Blanc 2015, a wooded wine, and added to the remarkable achievement of Spier Wines by winning six Double Gold and nine Gold medals as second best performer overall at the event.

The Veritas Vertex award for the top wine of the competition takes its name from the Latin vertex, which means “highest point” and it fits perfectly into the Veritas Awards notion of being the pinnacle of all the medals awarded. A handmade glass trophy, specially designed for the Vertex award winning wine, was presented to cellarmaster Frans Smit and his team from Spier.

A total of 71 Double Gold and 193 Gold medals were awarded.

In addition, altogether 32 producers won one Double Gold each.